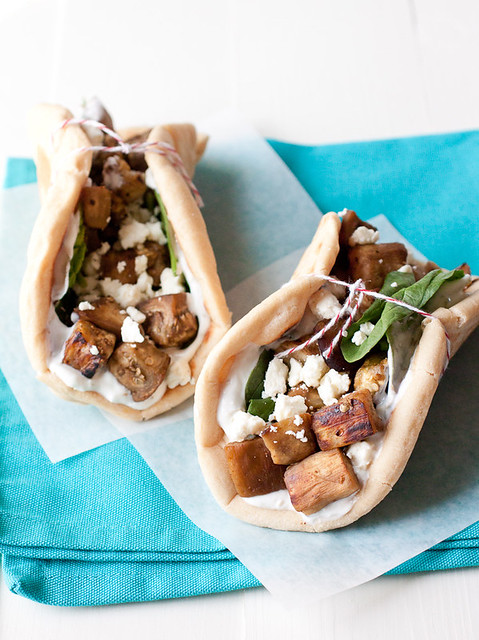 These eggplant flatbread wraps, filled with delicious veggies, feta, and a garlic-yogurt sauce, are a quick (just 30 minutes to make!) and healthy meal for any busy weeknight.

In the midst of prepping for garden season, we’re still sort of deciding what to plant in our garden beds.  Tomatoes are a must.  As are peas, beans, cucumbers (for salads, snacks, burgers, pickles, and dip), lettuce, and a few other veggies.  And as much as we love eggplant, we went back and forth about planting it.  In spite of some fantastic eggplant crops we’ve had in years past, the last two years were kind of busts.

But we went to a seed festival last weekend (more on that to come) and while I had my face in a few tomato plants trying to decide which to buy, Kyle was snatching up eggplant seedlings like it was his job.  So, I guess we’re doing eggplant again!  Weeee! 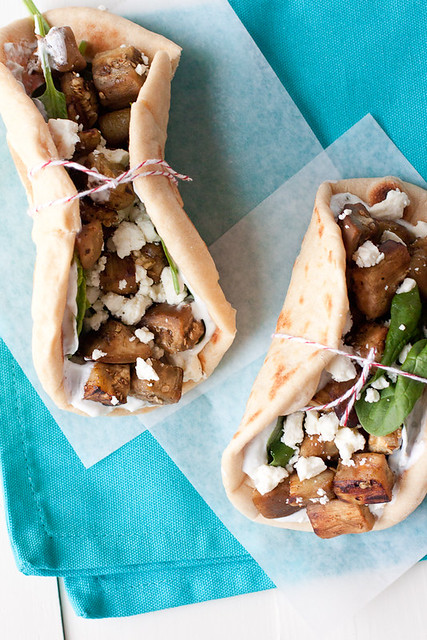 I whipped up a quick garlic yogurt sauce (not tzatziki but that would be amazing too), crumbled some feta (and yes, some whipped herb feta would totally put these wraps over the top as well), and tossed some fresh spinach leaves in with the eggplant in the wrap.  These wraps are fairly filling on their own so we consider them a meal by themselves and when a meatless meal like this comes together in under 25 minutes, I couldn’t be any happier.  Fingers crossed for a killer eggplant season this summer!

3.1
http://www.smells-like-home.com/2014/05/easy-eggplant-flatbread-wraps/
Copyright Smells Like Home. Please provide a link to this recipe should you share your version online or in print.

This recipe was brought to you by Smells Like Home:
http://www.smells-like-home.com/2014/05/easy-eggplant-flatbread-wraps/
< back print Toggle Image