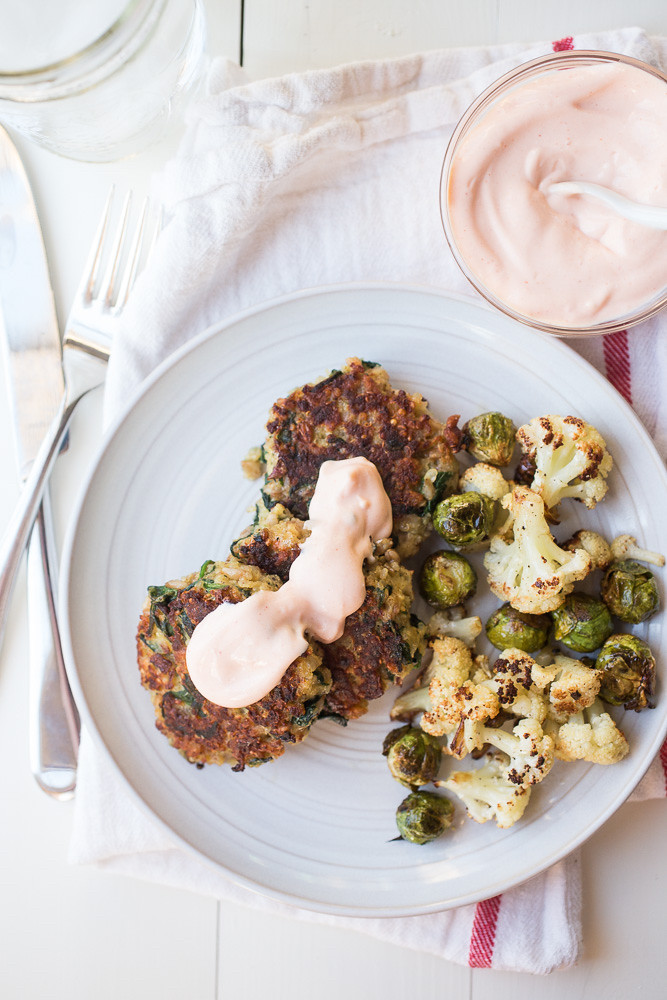 You wouldn’t know it from the paucity of recipes here, but I’ve become a huge quinoa fan over the past couple of years.  The very first recipe I tried was 4 or 5 years ago – a breakfast recipe – and honestly, I wasn’t blown away.  The next recipe I made was probably 2 years after that – a quinoa burrito bowl.  Very similar to my chicken fajita burrito bowls but with seasoned quinoa in place of the rice, this recipe was the quinoa game-changer.  It was this recipe which introduced Kyle to the world of quinoa and though I was super nervous to serve the boy something similar to couscous (which he claims he hates), he completely got on board. 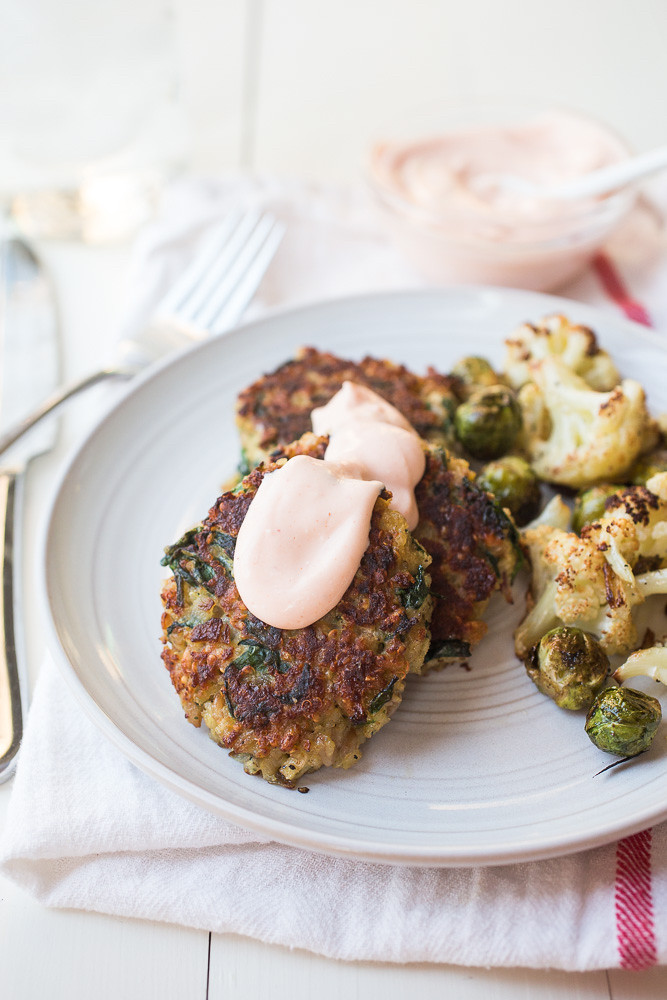 So fast-forward to this past weekend.  I know I shouldn’t have been, but I was a little nervous about what he’d think about these spinach and cheddar quinoa cakes with creamy buffalo sauce.  It’s the reason why I’ve had them on my list of meals to make for, oh, the better part of 9 months but since he asked to eat more meatless meals recently, I threw this one into the ring.

And…he loved it!  No less than 3 times during dinner did he say – without my asking! – how much he was enjoying the meal.  The recipe itself is a simple one to throw together and because you’ll saute fresh spinach with some shallots and garlic, you don’t have to squeeze the liquid from a package of frozen spinach, which I abhor doing. I cooked some farro with the quinoa and adored the slightly toothsome bite the farro gave to these cakes which may otherwise have be a little lacking in texture. The cheese, of course, isn’t required but really, why wouldn’t you add it?  I’ll consider using feta in place of the cheddar in the future and maybe topping the quinoa cakes with a garlic-yogurt-cucumber sauce in place of the creamy buffalo sauce I made this time around. 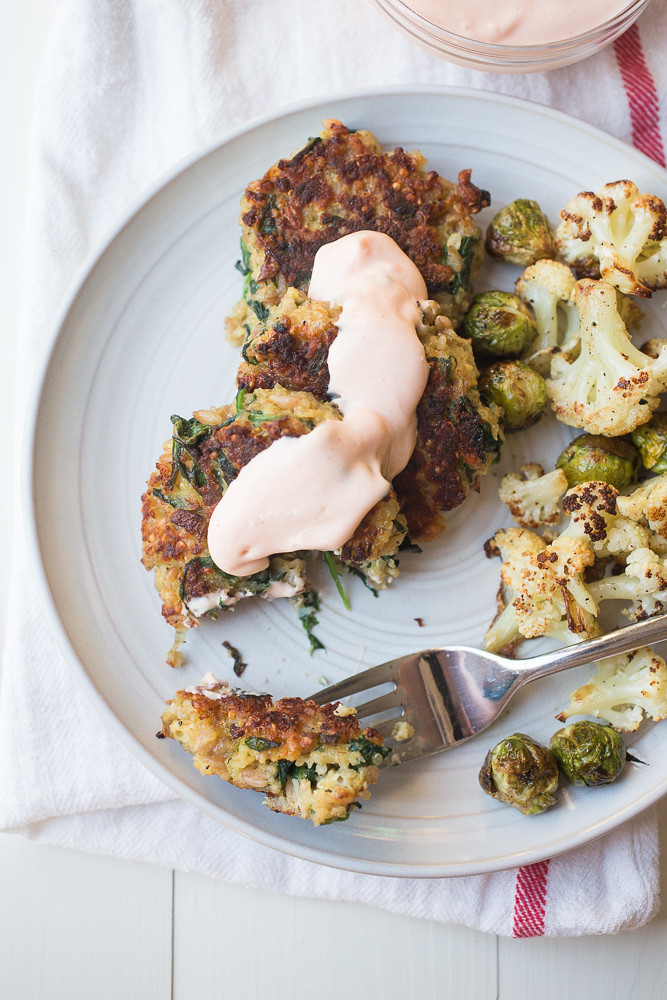 And so it goes.  I suppose we’ll be seeing lots more quinoa as we phase animal-based protein out of our diets and I can’t see why these spinach and cheddar quinoa cakes, and variations on this theme, won’t be happening more frequently in the future.  The perfect springtime, family-pleasing, weeknight meal?  I’ll say so. 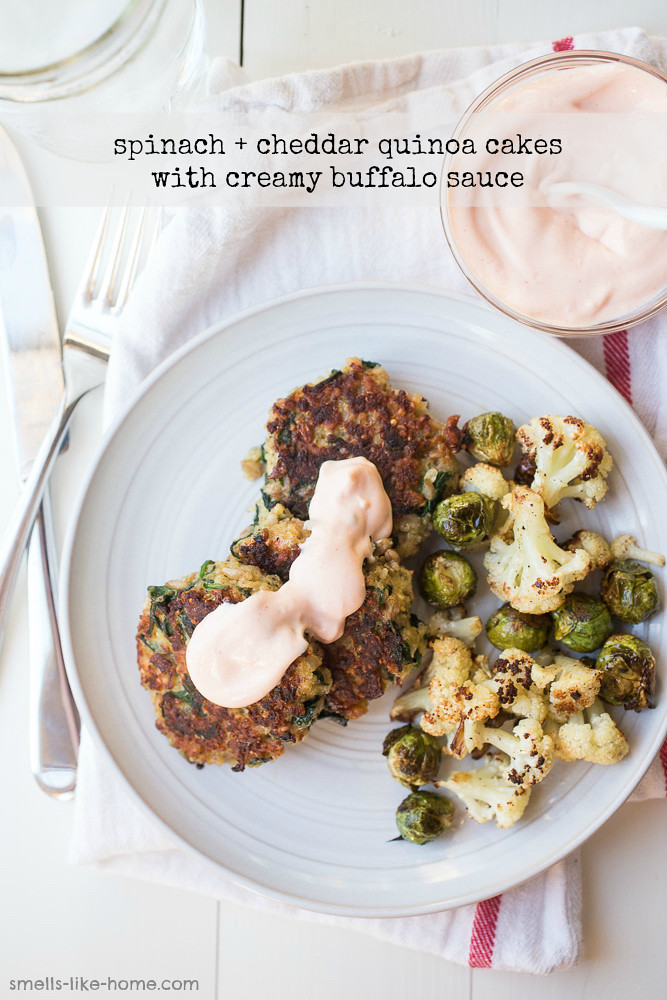 For the quinoa cakes:
For the buffalo sauce:

3.1
http://www.smells-like-home.com/2015/03/spinach-and-cheddar-quinoa-cakes-with-creamy-buffalo-sauce/
Copyright Smells Like Home. Please provide a link to this recipe should you share your version online or in print.

This recipe was brought to you by Smells Like Home:
http://www.smells-like-home.com/2015/03/spinach-and-cheddar-quinoa-cakes-with-creamy-buffalo-sauce/
< back print Toggle Image