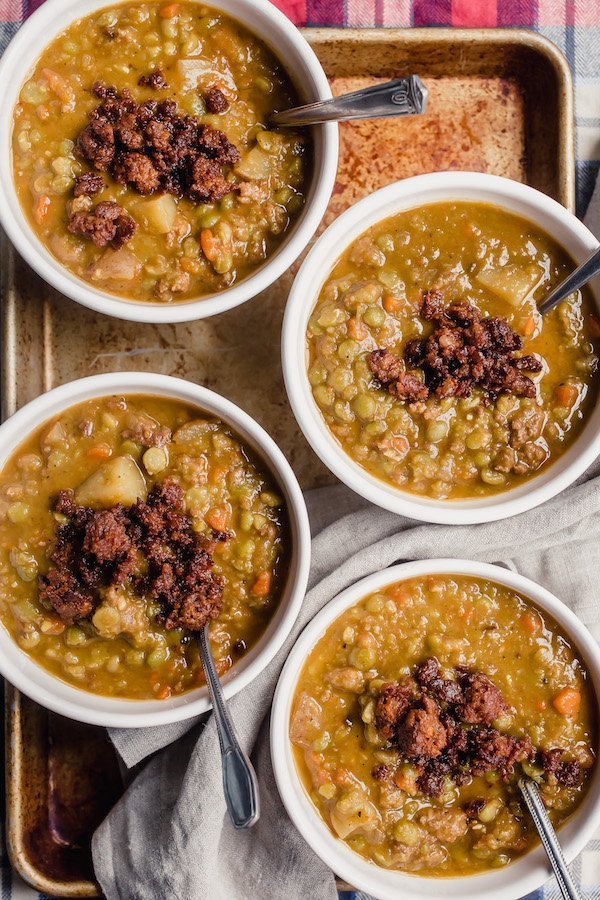 Ina’s split pea soup is a classic recipe and my addition of chorizo in place of the traditional ham takes this soup from great to unforgettable in a matter of no time at all!

Well, really, this recipe is called Parker’s Split Pea Soup. But I figured, who would know who Parker is just by reading the title of this post? 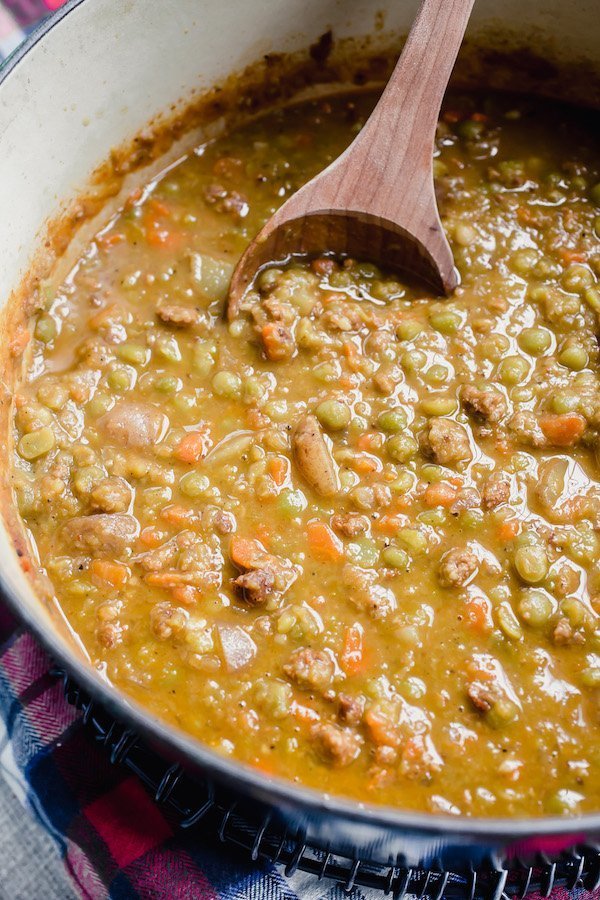 I’m not sure if if was the fact that it was just so…green? Or that it had ham, which I also loathed. 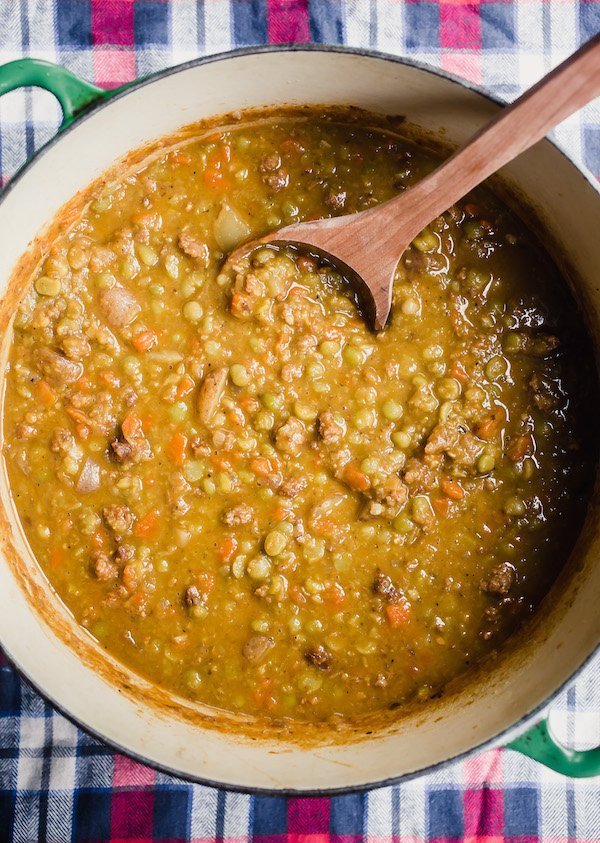 Yeah well, all of a sudden a few weeks ago, I felt this indescribable need to make split pea soup. Like, I could.not shake the craving I had for this soup!

I’m really not sure what brought this insatiable craving on, but I went out and bought a couple pounds of dried split peas and some chorizo sausage to add to Ina’s split pea soup.

The chorizo sounded like an excellent idea in place of the ham the recipe called for and the hot dogs my mom often added to split pea soup when I was a kid when she didn’t have leftover ham in the fridge/freezer. 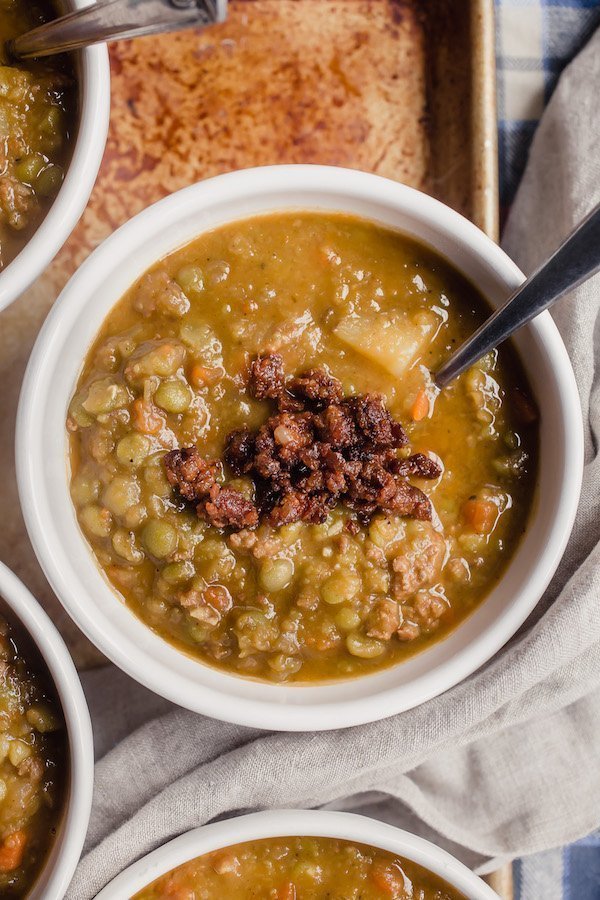 A 30-Minute Soup to Make When You’re Exhausted

I then promptly put the recipe on hold – procrastinate much? – until Kyle and I returned from our vacation. The first night back, I made this soup.

It was a simple recipe and required minimal time from me standing over the stove which made it the perfect choice for a meal on a night where I definitely didn’t feel like cooking. 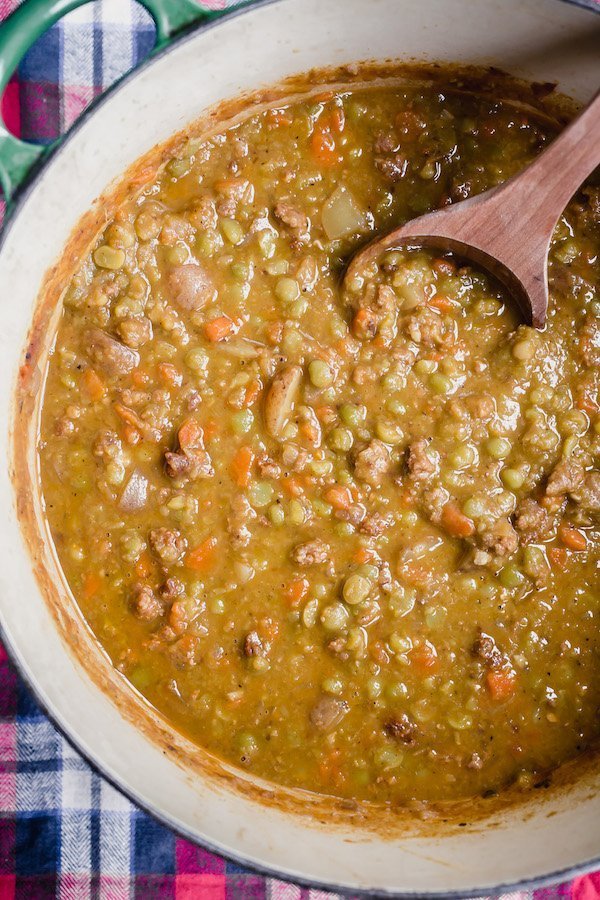 And OMGoodness. I can’t describe how incredible this soup turned out!!

How to Make Split Pea Soup

This is seriously one of the best soups I’ve ever had, let alone made because as we all know, my soup skills aren’t quite up to par. It’s the every bit of a thick soup you would expect from a split pea soup recipe but the chorizo just ramps up the flavor to another level! It adds a bit of spice and really gives what can sometimes be a bland soup a ton of depth. 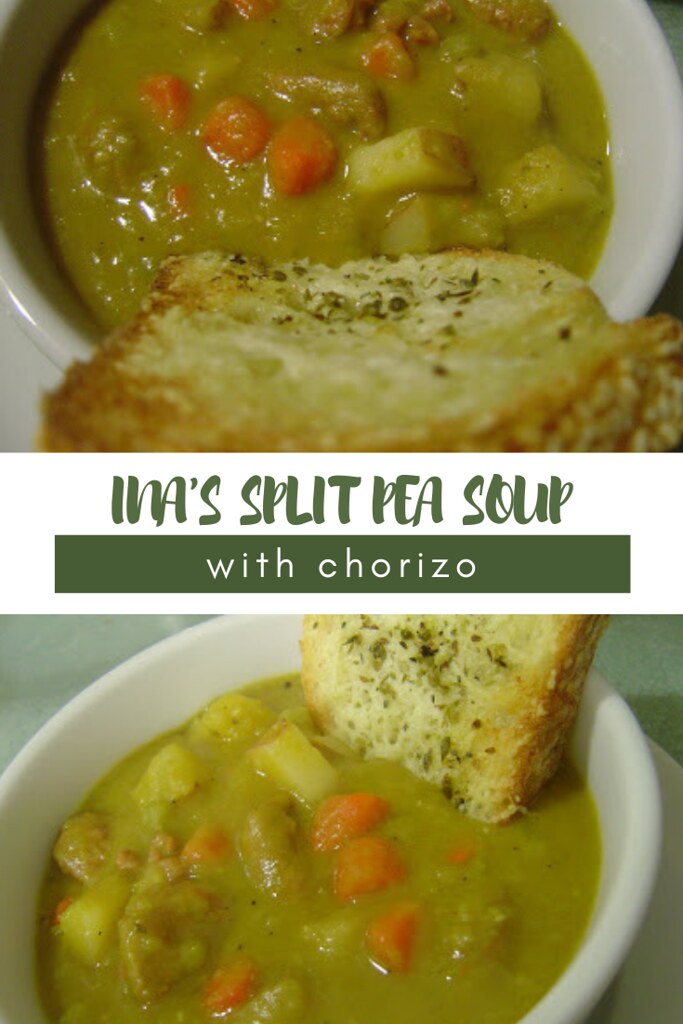 Here are the basic steps to making this pea soup. Be sure to check out the recipe card below for the full set of instructions!

STEP 2: Sauté the onions and garlic in a large pot or Dutch oven, and then add the dried herbs, carrots, potatoes, half of the dried split peas, and chicken stock. At this point, you’ll add the chorizo too, if you’re using it. 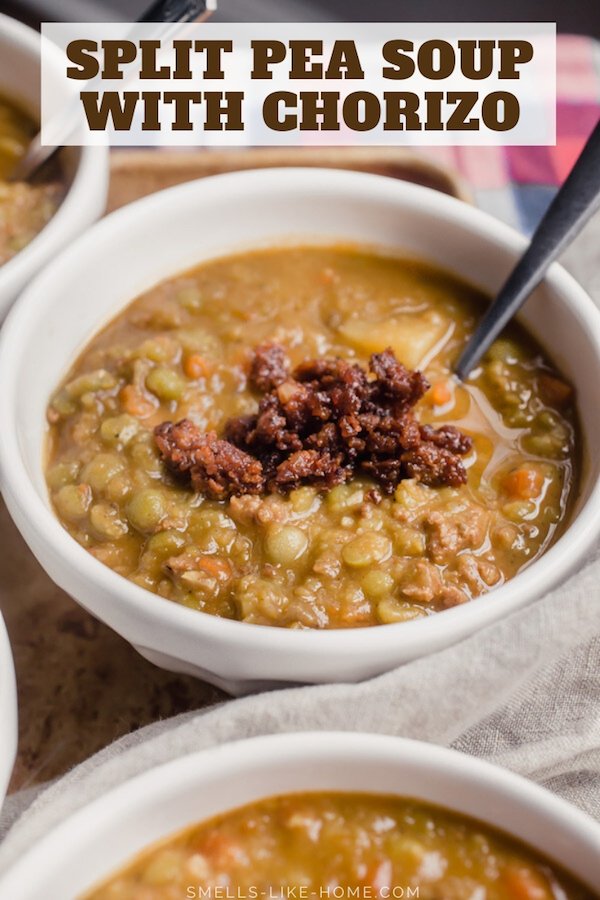 STEP 3: Allow the soup to simmer for 40 minutes, add the rest of the split peas, and then simmer for another 40 or so minutes. The first half of the peas will break down to thicken the soup and the second batch of split peas will have a little texture left to them.

How easy is that? I honestly can’t believe how much I loved this soup! 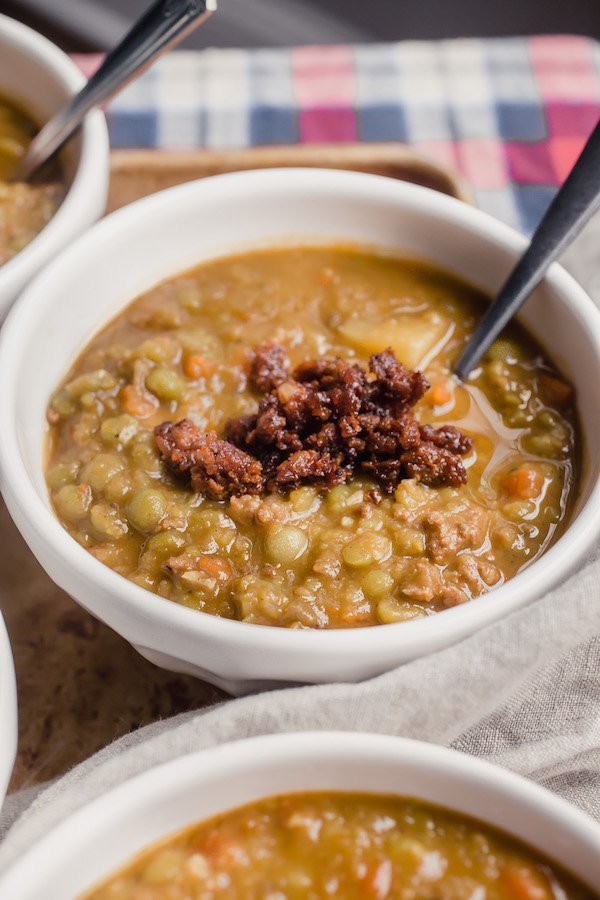 I halved the recipe from The Barefoot Contessa Cookbook which still yielded a ton of soup and there were plenty of leftovers, which neither of us minded at all. Ina Garten’s split pea soup with chorizo for days and days!

The soup was thick, flavorful, and the chorizo was a wonderful smoky addition. This was the best split pea soup recipe I’ve ever eaten and it will definitely make a appearance on my menu again soon! Maybe next time I’ll make some biscuits for dipping! 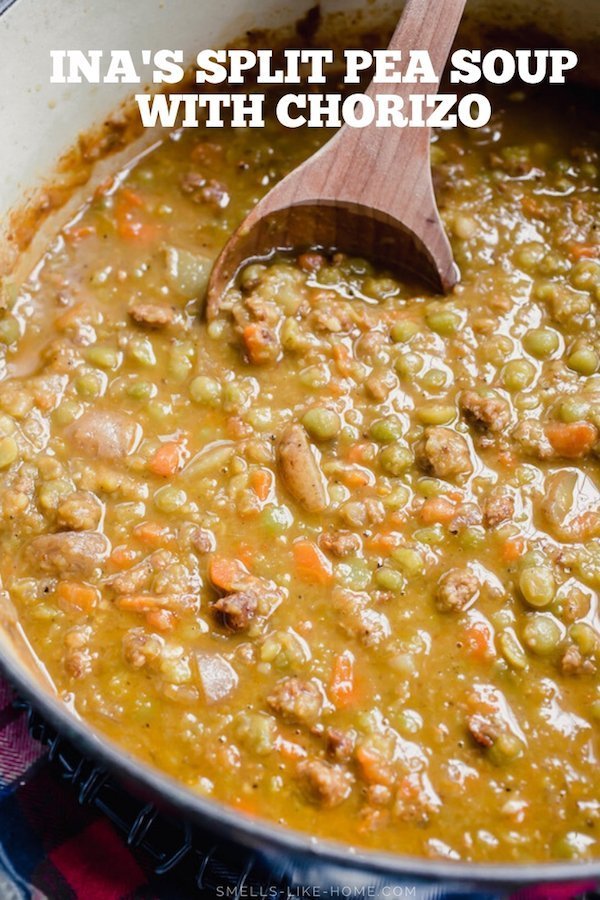 If you’re looking for other really great hearty soups for winter, you need to try these!

I swapped out split pea soup's traditional ham for chorizo in this recipe and oh boy this was a great decision! If you can find fresh chorizo, simply saute it in some olive oil at the start of the recipe and take it out of the pot before you cook the onions and garlic. Towards the end of the soup's cooking time, toss in half of what you cooked and then top the soup with some of the extra while you serve it.

If you can only find pre-cooked chorizo links, follow the instructions above. Alternatively, cut up hot dogs or kielbasa work too and they're super nostalgic as well!

adapted from The Barefoot Contessa Cookbook by Ina Garten 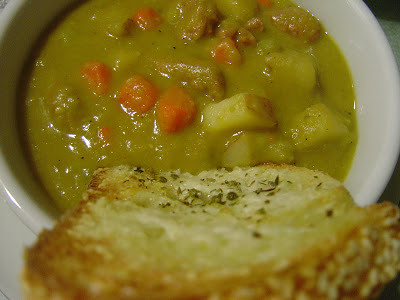 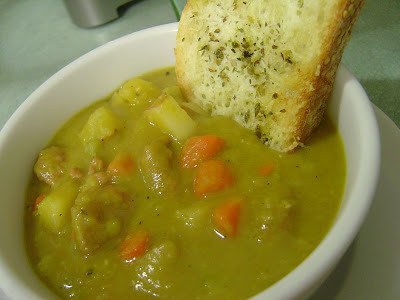 This recipe was brought to you by Smells Like Home:
https://www.smells-like-home.com/2008/02/inas-split-pea-soup/
< back print Toggle Image