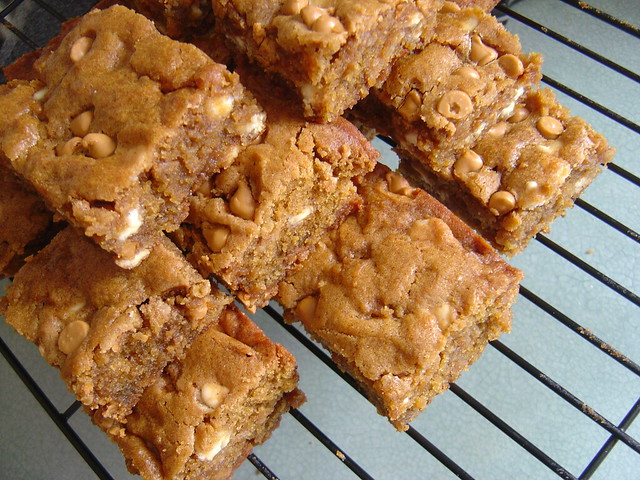 There’s not much more I can say about these pumpkin butterscotch blondies other than they were FANTASTIC.  I’m mean, really, really awesome.

And they got the stamp of approval from my cousin and her freshman roomie after I sent her a care package including these babies during her first college finals week. (She’s on trimesters hence the early finals.) Remember those early days of email…or the days ::gasp!:: pre email…when you ran to your mailbox hoping for something…anything!…from home?

Well, since the world seems so much smaller now due to the ability to be constantly connected with each other, I know mail from home while at college is pretty rare.  However, I remember that the days when packages arrived were just the best!  So why not take a few minutes and brighten someone’s day with a package of these!!

And if you don’t have anyone to send them to, keep them all to yourself.  I promise, it won’t be difficult and if it were up to Kyle, he would have kept them all to himself. You won’t question how that’s possible after you try them because they’re just soooo good.

The mix of butterscotch chips and pumpkin spice is the perfect combination and I’m pretty sure another batch will be going in the oven this weekend. Gotta keep the man happy, right?

This recipe was brought to you by Smells Like Home:
https://www.smells-like-home.com/2009/11/pumpkin-butterscotch-blondies/
< back print Toggle Image