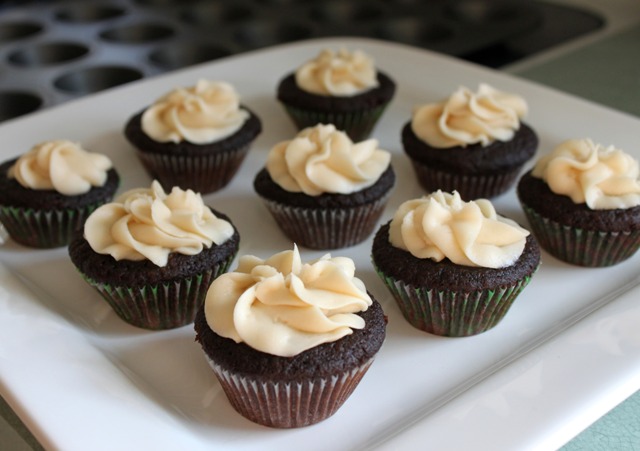 I may have made these cute little cupcakes for St. Paddy’s Day this year but don’t be mistaken: no one will complain if you bring these to work say, in the middle of August.

I had heard so so much about the now famous Guinness and Baileys cupcakes and honestly, at first, I wasn’t thrilled with the idea of beer cupcakes. In fact, it took me two St. Paddy’s days to finally work up the courage to make them. But boy am I glad I did!

I absolutely loved how they turned out and since the Guinness gives just a little undertone of flavor to the chocolate cupcakes, I was able to concentrate on the awesomeness of the Bailey’s Irish Cream buttercream. Oh.My.Goodness. The buttercream was seriously delicious!!

The Baileys is a prominent flavor in this boozy buttercream so if you’re serving them to those who are averse (ahem) to alcohol, they should probably be forewarned. And I definitely wouldn’t serve these cupcakes to kids since the alcohol in the buttercream isn’t cooked.

Everyone who tried these cupcakes raved over them, even those who didn’t know there was alcohol in them, and I will not hesitate to make them again for anyone who requests them.

You can bake the cupcakes a week or two in advance and store them, well wrapped, in the freezer. You can also fill them before you freeze them. They also keep filled — or filled and frosted — in the fridge for a day. If you make mini cupcakes instead of full-size, reduce the baking time to 12 minutes.

For the Guinness chocolate cupcakes:

For the Baileys frosting:
3 to 4 cups confectioners’ sugar
1 stick (½ cup or 4 ounces) unsalted butter, at room temperature
3 to 4 tablespoons Baileys (or milk, heavy cream, or a combination thereof)

This recipe was brought to you by Smells Like Home:
https://www.smells-like-home.com/2010/04/guinness-chocolate-cupcakes-baileys-irish-cream-buttercream/
< back print Toggle Image