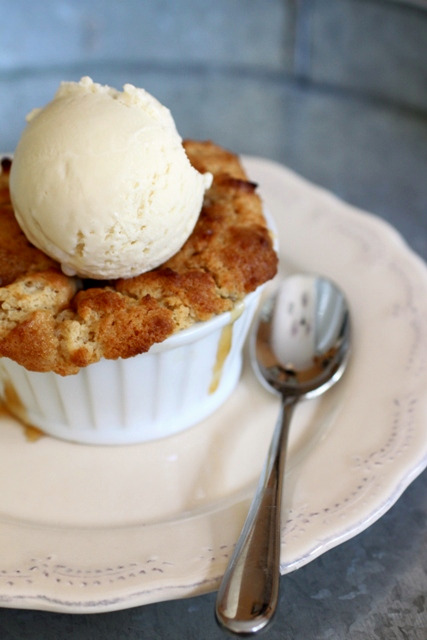 Remember this photo?  I included it in my French-Inspired Maple is the Staple Luxury Dinner Party write-up for my Project Food Blog Challenge #3 entry.  It was way down at the bottom of the post but that’s not to say it wasn’t important.  In fact, I themed my entire 5 course dinner around this one dessert!  Maple is a big-time New England flavor, especially in the fall, and it’s one that I’ve come to love baking with in the past few years.  And it just so happens that this pear-maple cobbler recipe was chosen in advance by Josie for Project Pastry Queen’s post last week.  Pears and maple in the same dessert?  I’m sold!  It was a dessert I was truly looking forward to making from The Pastry Queen so I decided to theme my entire dinner party around the maple in the recipe.

And boy was I happy with the end result of these cobblers.  Not only are they pretty to look at but the overall flavor was spot on.  The pears were baked to perfection. They softened but were still firm enough to let you know you were eating pears and not mush.  The maple mingled with the nutmeg (which I reduced by half in the filling and topping) and produced this warm and cozy flavor that made me want to pour a hot cup of coffee and snuggle up on the couch under a blanket.  And the cobbler topping…well, that was by far the best part of the whole dessert.  I originally thought there would be way too much before I started topping the hot filling with it, but I kept piling it on, and it turns out that it was the perfect amount.  These individual cobblers were the perfect ending to my maple dinner party and topped with some cinnamon ice cream that gets all delicious with the warm topping, they’ll be the perfect ending to any of your dinners.

Pear and Maple Cobblers
source: adapted from The Pastry Queen by Rebecca Rather via Pink Parsley

This recipe was brought to you by Smells Like Home:
https://www.smells-like-home.com/2010/10/individual-pear-maple-cobblers/
< back print Toggle Image