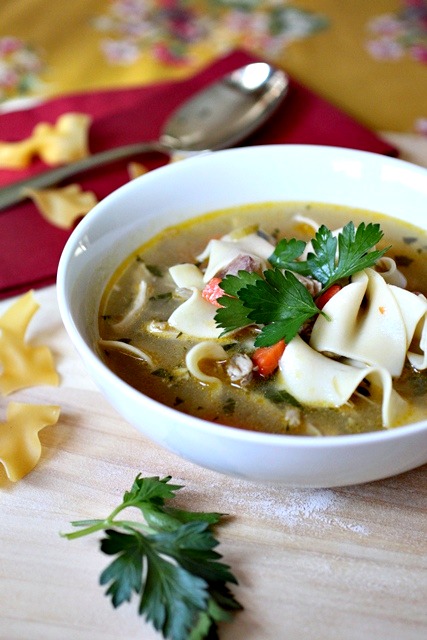 Some meals seem so ordinary that I’ve never considered making them.  Not that I cook way outside the box but take chicken noodle soup, for example.

It’s one of the most basic soups, one of the most traditional, and probably the most well-known to be consumed when you’re sick.  I’ve always thought of it as just “eh” and that sentiment probably comes from the fact that I was fed this soup mostly from a can as a kid.  Actually, I always thought it was kind of an annoying soup to eat with all those little noodles slurping around everywhere, impossible to get on your spoon. So I never considered making it.

And then my feelings changed when I ended up with 6 quarts of stock and 6 cups of leftover turkey from Thanksgiving. 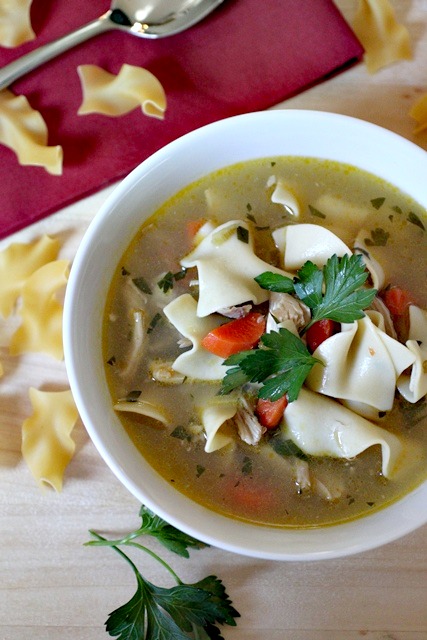 Sure, I could have found a million other things to use the stock for but I firmly decided to make my own chicken [turkey] noodle soup and try to change my mediocre beliefs about this classic soup.  And in 25 minutes, using another promised Barefoot Contessa soup recipe, I had hot soup ready to eat.

It was all the things I had been missing from this canned soup as a kid: flavor, texture, richness, comfort.  And the best part about it was that there were leftovers. Again, leftovers of leftovers but these leftovers are really the best kind.  You can only eat so much leftover turkey, stuffing, and sweet potatoes but when you have leftovers of a completely different meal made from that orginal turkey, that’s a whole other story.

And lucky for me, I’ve got more shredded turkey and stock frozen so this soup will be making an appearance again soon on one of the those inevitably frigid New England nights.

Heat oil in a large pot or dutch oven over medium-high heat.  Add the celery, carrots, salt, and pepper and cook for 10-12 minutes until softened.  Pour in the stock, bring to a boil over high heat, and add the noodles.  Cook the noodles for 10 minutes, then add the chicken (or turkey) and parsley.  Allow the chicken/turkey to heat through.  Serve hot.

This recipe was brought to you by Smells Like Home:
https://www.smells-like-home.com/2010/12/classic-chicken-noodle-soup/
< back print Toggle Image