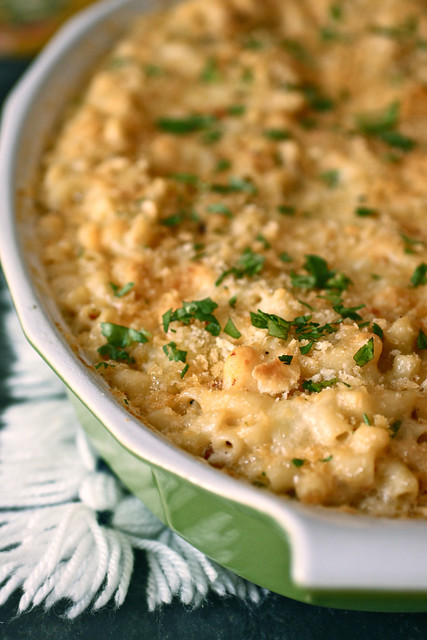 There are weeks when I feel like my brain is working in overtime.  Last week was one of those weeks.  I wasn’t feeling 100% for most of the week and by Friday, I was kaput.  Done.  Fried.  I worked only in the morning, had a doctor’s appointment and came home early ahead of the snow that started building during my afternoon nap (which felt wonderful by the way).  And since it was snowing so heavily, I nixed my weekly Friday evening grocery store trip which left me scrambling for ideas of what to make for dinner.  I wanted something warm and comforting, especially considering the convergence of the weather and my rough week.  I wanted mac and cheese. 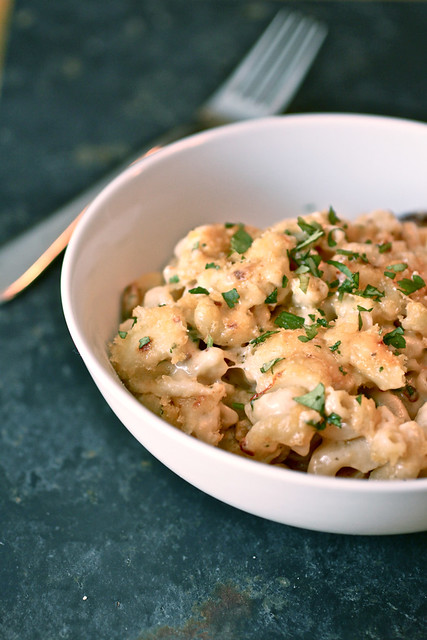 But I had no ordinary mac and cheese in mind.  I had some smokey chipotle cheddar cheese leftover from book club the previous night and was dying to use it up.  I also had a small can of chipotles in adobo in my pantry that was screaming to be used…and hence the idea of this chipotle mac and cheese was born.  Probably not to my despair, we were out of milk but I certainly had plenty of heavy cream and half-and-half!  Holy cow – mac and cheese made with heavy cream and half-and-half? Yes, please!!  I rarely use anything other than skim milk for mac and cheese so this dish turned out to be such a treat.  It was creamier than I could have imagined, oooey-gooey from all three types of cheese, and had just enough smokey heat to boost my mood and warm me up for the rest of that cold, snowy night.  Kyle and I both loved this mac and cheese so much that we’ve been fighting for the leftovers for lunches this weekend.  Luckily, the recipe makes almost enough to feed an army so there will plenty to go around your table too!

Then you must try my homemade Panera Bread mac and cheese recipe! It’s amazing!!

Preheat oven to 350 degrees F. Grease a 9×13 inch baking dish.  Cook pasta in a large pot of boiling water for 7 minutes. Reserve about 1/2 cup of the cooking liquid before draining.

Meanwhile, in a large saucepan, melt butter over medium heat.  Stir in flour until the two become a smooth mixture.  Cook for 1 1/2 minutes, stirring occasionally. Stir in salt, pepper, garlic powder, and onion powder. Slowly whisk in milk, making sure there are no lumps in the mixture.  Add chipotle peppers, adobo sauce, and cilantro to the milk mixture and stir to combine. Bring the heat up to medium-high and continue to stir frequently until the mixture thickens (it should coat the back of a spoon) and begins to simmer.  Allow the mixture to simmer for 2 minutes and remove from the heat.  Slowly stir in most of the mozzarella, chipotle cheddar, and sharp cheddar cheeses, reserving some to sprinkle on top before baking.  The cheeses should melt into the milk mixture and become slightly stringy.  If the mixture starts to become a mass of cheese, add in some of the hot pasta water to help thin it out.

Pour the drained pasta into a large bowl (or the pot you cooked it in) and stir in milk-cheese mixture so that it completely coats all of the pasta.  Transfer the pasta to the baking dish.  Sprinkle with remaining cheese and Japanese panko breadcrumbs.  Bake uncovered for 20 – 25 minutes or until the sides begin to bubble and top is nicely browned.  Allow the mac and cheese to set for 5 minutes and garnish with extra cilantro (if desired) before serving.

This recipe was brought to you by Smells Like Home:
https://www.smells-like-home.com/2011/01/chipotle-mac-and-cheese/
< back print Toggle Image