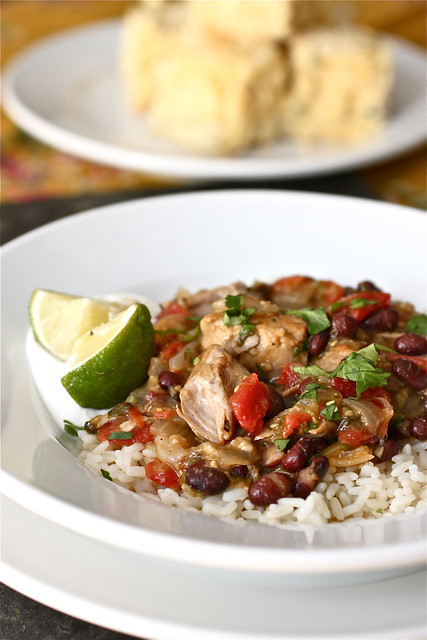 It’s no surprise that I loved making this stew as much as I did for book club a few weeks ago.  Like most stews, it was an easy meal where you throw all of the ingredients in one pot and let it simmer down for a few hours.  The rewards, of course, are plentiful with gorgeously concentrated flavors and pork that started as a relatively tough piece of meat but ends up falling apart at the slightest touch.  If you’re raising an eyebrow at the ingredient list – orange juice and beer cooked together?? – have no worries.  The strange combination of these two ingredients is one that works beautifully after a few hours of cooking.  There is just enough orange flavor to let you know it’s there and the beer adds such a depth of flavor, perfectly complementing all of the other flavors.   I had never used tomatillos in a recipe before so I didn’t really know what to expect but they were no different than using tomatoes, if a little bit of a PIA to peel the outer skins.

You could most definitely let this stew cook away all day in a crockpot for 6-8 hours on low but I had the day off the day I cooked it and it was great to be able to leave it simmering on the stove while I ran around the house straightening up before book club.  I’m not sure the cut of pork would matter too much, though I think a tenderloin would be dry if used, and I used a regular ‘ol pork roast (not shoulder, butt, or anything that large) from my freezer that I trimmed most of the fat off of before cooking.  As recommended in the recipe, I served the stew over rice and I whipped up some of my favorite cornbread to serve on the side (but I think some chile-cheese bread would be just as great!).   It was a warm and homey meal that went over really well with my book club members (and Kyle who sneaked up for a bowl) and I know you’ll love it too!

The Swallow’s Pork and Tomatillo Stew
source: slightly adapted from Ruth Reichl, Tender at the Bone: Growing Up at the Table

This recipe was brought to you by Smells Like Home:
https://www.smells-like-home.com/2011/01/pork-and-tomatillo-stew/
< back print Toggle Image