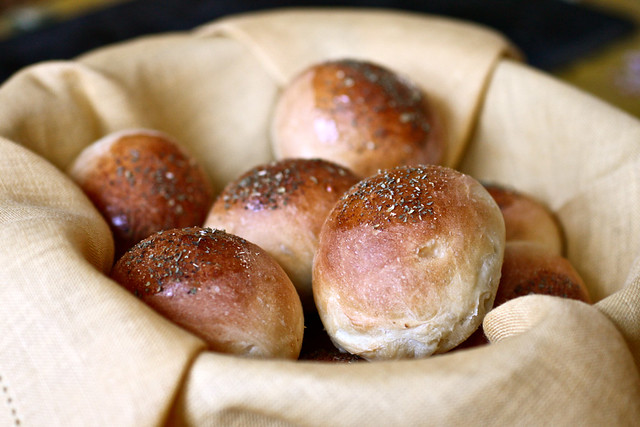 While Shawnda laps up the sun in Mexico with a few amazing food bloggers this week, we’re doing a Wildcard Week for Project Pastry Queen.  Now, even though I’d much rather be in Mexico with Shawnda (hope you’re having fun, girl!!), I’m still really excited to share these Rocket Rolls with you because The Pastry Queen has outdone herself with this recipe.  With such a strange name, I thought for the longest time that they would be shaped like torpedo rolls and for that reason, I was nervous about making them.  Roll-shaping, after all, isn’t my specialty but as it turns out, you shape the dough into little boules (balls), place them on the sheet pan, and you’re done.  So simple!

And yet these Rocket Rolls are so unassuming!  Just by looking at them, I expected a pretty regular dinner roll but I underestimated this recipe entirely.  When you pull them apart…to you know, add some butter…it’s like you’re opening a cloud of soft warm goodness…the kind of goodness that feels like warm towels from the dryer on a cold winter’s morning.  Shawnda in fact likened them to the texture of Sunbeam bread but I’ll go ahead and say that while this is a close reference point, these rolls totally blow any store-bought bread out of the water.  There is no comparison!  I actually made these rolls in mid-December before we were supposed to post them in our blogs but Kyle and I loved them so much that we finished them before I could take any photos.  It’s such a shame that I’ve held off for so long sharing them with you but hey, I’m not complaining about having to make them again for some photos!

Rocket Rolls
source: adapted from The Pastry Queenby Rebecca Rather

If you don’t have or can’t find active dry yeast, you can easily use instant yeast in its place.  In doing so, you can skip the 5-minute step of waiting for the yeast-water mixture to become foamy.  Just combine the yeast and water then move right along with the recipe as written.

This recipe was brought to you by Smells Like Home:
https://www.smells-like-home.com/2011/01/rocket-rolls/
< back print Toggle Image