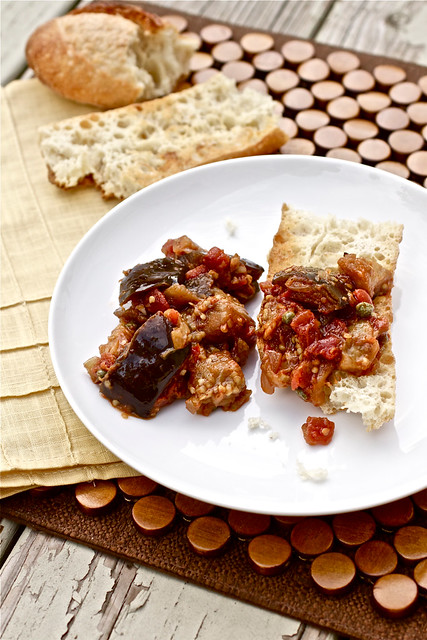 The eggplant harvest continues here.  We picked a couple more before the hurricane/tropical storm hit last weekend and the plants with smaller eggplant survived the storm, thankfully.  Today, I’m highlighting this eggplant caponata and I truly believe it’s a dish that every cook should have in his/her repertoire.  If you’re unfamiliar with it, caponata is a traditional Sicilian stew (entrée, side, or appetizer/antipasti) usually made with eggplant, celery, capers, and a tomato-based sauce but [according to Wikipedia] other add-ins such as red peppers, pine nuts, raisins, olives, carrots, octopus, and lobster are also widely accepted. 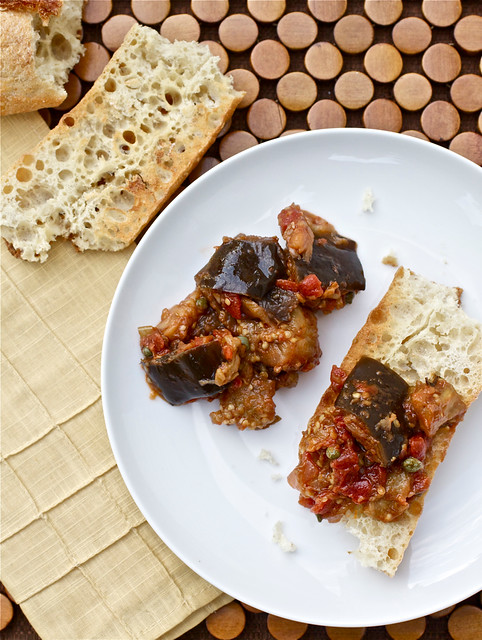 In this recipe, the eggplant is sautéed down to a soft and almost spreadable texture which makes the caponata a gorgeous addition to some crusty bread (which we had for dinner twice this past week).  I also considered serving this over pasta and also on it’s own with a small salad on the side, and I think it would make an excellent complement to a meaty fish like halibut or swordfish.  For lunch this week, I put the caponata on a toasted hard roll with some provolone (also twice this week – the recipe makes a lot of caponata!) and it made for a terrific sandwich.  All in all, Kyle and I both fell in love with this recipe and I’m contemplating if I should make it again for an upcoming party next weekend.  The caponata is warm and earthy with a deep flavor of fresh tomato sauce and it’s these simple flavors that make it so easy to fall in love with.  It’s a recipe that I’ll be able to make all year round (wouldn’t this be great by a fire in the middle of winter?), since eggplants are always available in the grocery stores these days, but will most definitely look forward to each August when my garden is overloaded with eggplants.

adapted from The Art of Simple Food by Alice Waters

This recipe was brought to you by Smells Like Home:
https://www.smells-like-home.com/2011/09/eggplant-caponata/
< back print Toggle Image