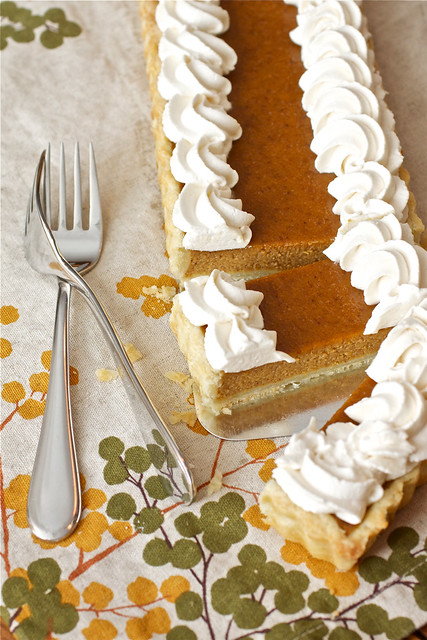 Bourbon pumpkin tart: Full of warmth from the spices and the pastry crust is buttery and flaky, way better than any regular soggy pumpkin pie crust.

‘Tis the season for all things pumpkin and as my turn to choose for Project Pastry Queen approached this time around, I was stoked to see that my recipe would fall smack in the middle of October.

It’s never easy to choose from this book but this bourbon pumpkin tart jumped out at me as something homey and comforting but a little different at the same time.

Buuut, I’ve said before that I’m not a fan of pumpkin pie so I’m always on the hunt for alternative desserts to take the place of the traditional on the Thanksgiving table. 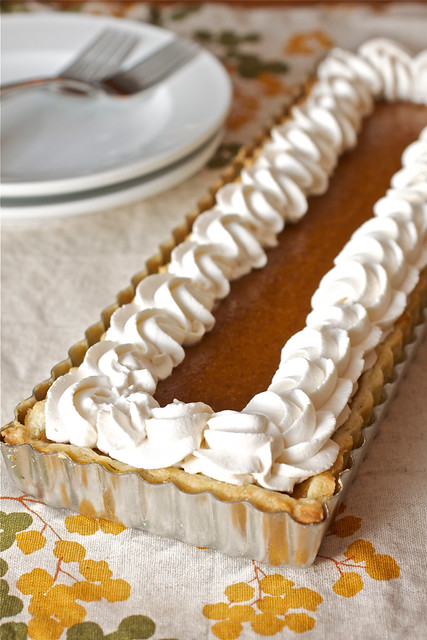 And just like those pumpkin mousse parfaits were a lovely change last year, this bourbon pumpkin tart is really something special.

The funny thing is, the texture of this tart is sort of like a pumpkin pie but the tart as a whole is full of warmth from the spices and the pastry crust is buttery and flaky.

If you’re concerned about the bourbon, don’t be.  It’s a barely-there flavor that seems to flutter just under the spices, rounding out and making this tart a little more “mature.” 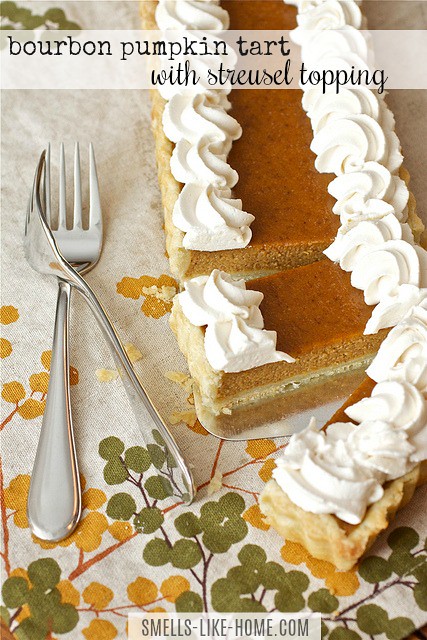 I did make the full batter recipe also but reserved the other half to make mini-tarts later in the week to bring to work.  I also [obviously] opted out of the streusel topping and went with a traditional whipped cream instead.

A pretty piping job with some regular ol’ whipped cream can transform a ho-hum dessert to an over-the-top one – wouldn’t this tart look great on the Thanksgiving dessert table? I certainly think so!

This bourbon pumpkin tart has been one of the most popular recipes every holiday season since I first shared it back in 2011. I know you’ll love it as much as we do!

I used half of the dough but I made a full filling recipe so that I could use my lonely and underused rectangular tart pan and I baked the tart on a baking sheet for 35 minutes.

adapted from The Pastry Queen by Rebecca Rather

This recipe was brought to you by Smells Like Home:
https://www.smells-like-home.com/2011/10/bourbon-pumpkin-tart-with-streusel-topping/
< back print Toggle Image