A Blogging Girlfriends Weekend in Richmond

When I started Smells Like Home almost 5 years ago (this April!), I was a newlywed and I had just started to develop a love for cooking.  Actually, I should clarify; I had always loved to cook but let’s just say that I wouldn’t have made the cut for Worst Cooks in America only by a small margin.  I had a 7-meal rotation that was supplemented with pasta and sauce, toss salads, and take-out.  At this time, food blogs were in their toddler years.  David Lebovitz, David Leite, and Simply Recipes had been around a while and Smitten Kitchen was barely a year old.  For a new blogger, it was a lonely world but I was a part of newlywed cooking board where starting a food blog was becoming ever-popular…and that’s where I met Annie, Courtney, Elly, and Josie.

Over the years, we’ve bonded through our similar love for food, learned to cook and bake from each others posted recipes and advice, and developed a friendship that only few can understand.  I’ve cried for them when they have dealt with life’s most difficult moments, have cried with joy when Annie and Josie had their babies this year, and have cried when their words have supported me through times when I have been at my lowest.  (Obviously, I do a lot of crying.)  At the same time though, you can find me whooping and squealing with excitement when I read about their triumphs and accomplishments, both in real-life and blog-life.  We email everyday, several times a day, via endless Gmail threads and keep in touch via Facebook, Twitter, and texts as well.  I “talk” to these girls more often than I talk to my mom and my best friend.  They have become some of my very dearest friends and I never ever imagined that this blog would lead to me to such amazing friendships. 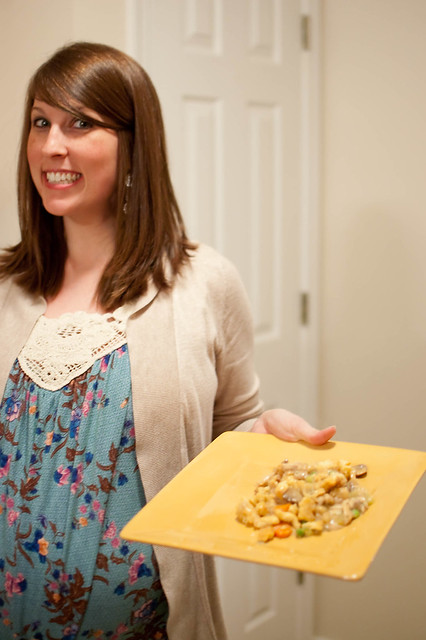 I realize the point of this post was to tell you about our recent weekend in Richmond, but I felt that you needed a little background first to really understand my story about this weekend.  As you may have read last week, Courtney is expecting her first baby in a few short weeks and right before Christmas, Annie, Josie, and I (Elly wasn’t able to join us 🙁 ) decided to surprise Courtney with a visit to Richmond to celebrate with her in real-life.  It was the kind of get together we had talked about doing for months – a group get together where we could hang out, cook, and relax with each other. 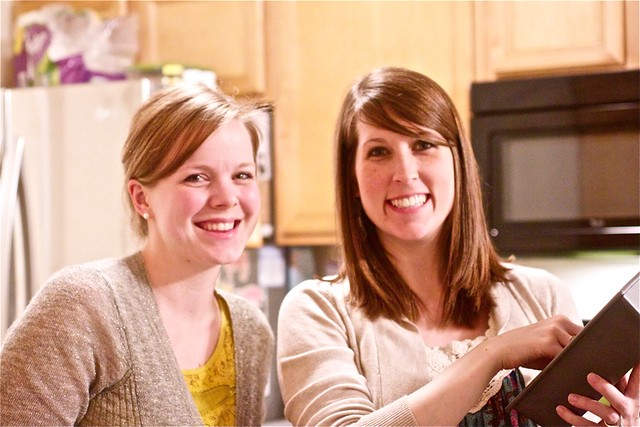 So on the Friday we planned to meet in Richmond, Courtney had no idea that I was in the car driving down from CT or that Josie and Annie were flying in with me eventually waiting at the airport in Richmond to pick them up.  (For the record, I squealed with delight when they got to my car.)  We had been in touch with Courtney’s husband, Eric, to arrange all of the details and without a clue as to what was going on, Courtney walked into Julep’s that night to find us sitting at a table, having a few drinks, waiting for her and Eric to arrive for dinner.  Her level of surprise was just awesome to see!

And from that point, our weekend took off.  We fell into a level of comfort with each other that I don’t think I had expected…it was as if our email conversations morphed without missing a single beat into real-life conversations.  Dinner at Julep’s was insane – upscale Southern food that was homey, comforting, and memorable. (See the bottom of the post for what I ate during the weekend – no photos though, sorry.)  We stayed up like college kids that night chatting until 2am – something I haven’t done since before my wedding with my bridesmaids. 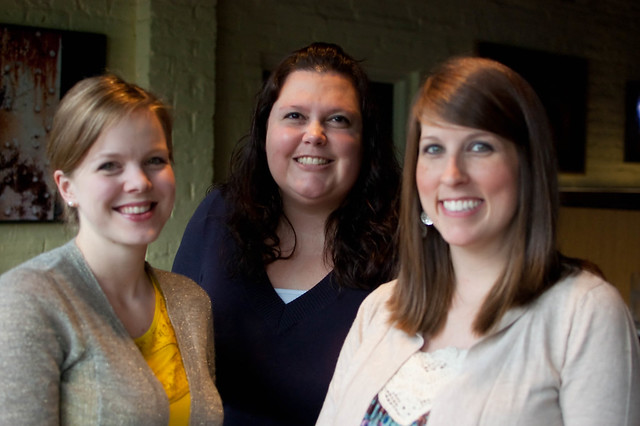 A bleary-eyed Saturday morning led us to Lulu’s, where Josie had made reservations for brunch and where we planned an informal shower for Courtney.  We had anticipated an awesome menu (because really, would a bunch of food bloggers pick a less-than-awesome menu?) but I was truly blown away by my choice, a “fancified” version shrimp and grits.  From Lulu’s Courtney took us to the Carytown district where we hit up a gorgeous Penzey’s (it was Josie’s first time!) and then walked a few blocks to the most mind-blowing chocolate shop I’ve ever encountered, For the Love of Chocolate.

Aisle after aisle filled with virtually every kind of chocolate you could imagine.  Walls lined with glass jars of malted milk balls (swoon), chocolate covered espresso beans of all different flavors, chocolate covered pretzels, popcorn, marshmallows.  Cases lined with dozens and dozens of different types of handmade truffles, fudge, bark, and chocolate covered cherries and Oreos.  This place was like Charlie and the Chocolate Factory on steroids.  I circled the whole store twice and still probably missed 25% of what was there.  On my last trip around, I came upon Josie as she actually shouted her excitement to have found 4-inch in diameter peanut butter cups in at least 7 different flavors (photo below). 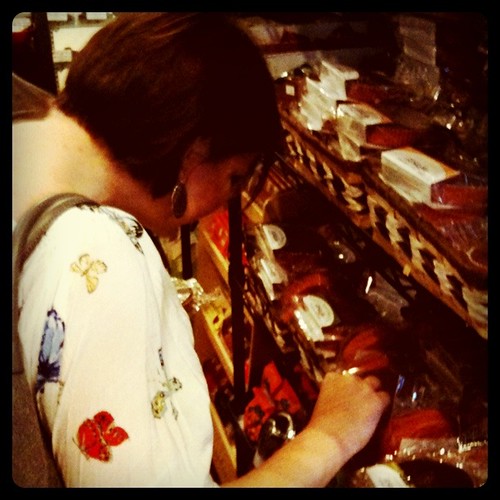 Some of my loot included a smattering of different truffles (which I’m saving to celebrate the first night in our new home this weekend) and a PB&J chocolate peanut butter cup which is being portioned off day-by-day this week as a stress-reliever as I get ready for the aforementioned new home.

We spent the rest of Saturday afternoon deciding what to make for dinner at Courtney’s house that night.  And by the rest of the afternoon, I mean that 4 food bloggers spent almost 4 hours scouring cookbooks, food magazines, blogs, and websites.  It was quite an amusing process but we ended up with a grocery list at Whole Foods to pick up what we needed and then back at Courtney’s to cook a three course meal. 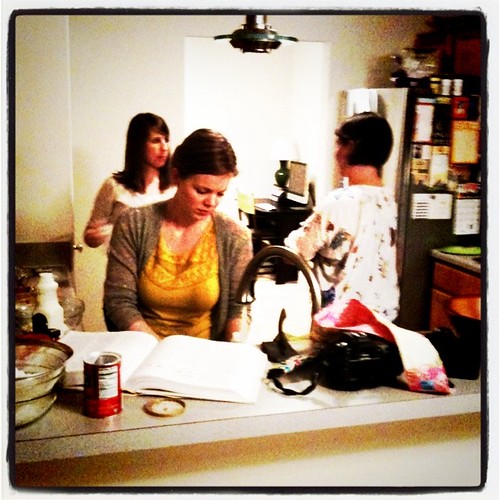 It has pretty much been our collective dream to be able to cook together and I couldn’t have been more excited about our menu: baked tex-mex pimento cheese dip, a cozy chicken pot pie in honor of the snow we had that afternoon, and a nutella pound cake for dessert.  The dip (which I’ve made before) and the pot pie were outstanding.  The cake…a massive kitchen fail. Oh the irony!  You could imagine the look on our experienced baker faces when the cake got turned out of the pan.  Needless to say, no photos of the cake were taken by any of us.  Courtney, however, saved our evening because she just happened to have some of this cake sitting in the fridge.  Divine blogger intervention at its best. 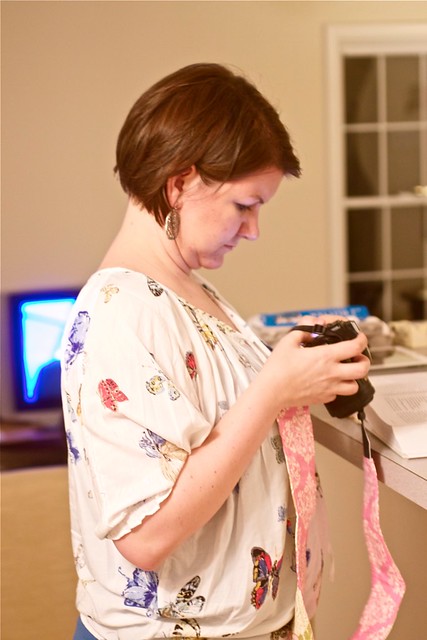 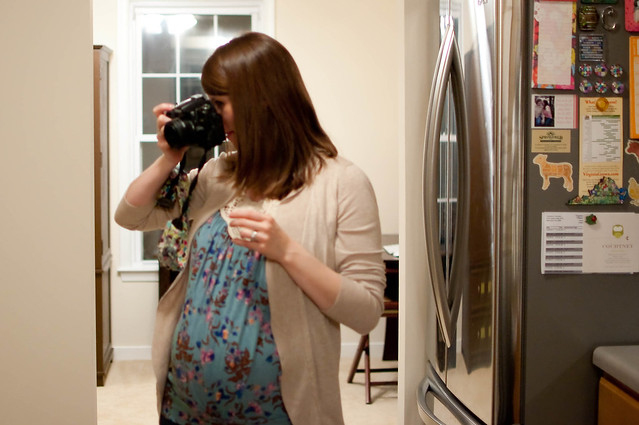 The whole night was filled with chatter about food, our families and kids, blogging, life at home and work, and so many great laughs.  At just after 3am, we left Courtney’s and headed back to the hotel where my head hit the pillow at 4am.  It was such an awesome day but as the night wore on, my sadness grew at the thought of having to leave those girls the next day.  I couldn’t have imagined the amount of fun we had had that weekend and so watching Courtney and Eric take Annie and Josie to the airport the next morning wasn’t easy.  I cried watching them leave, just as I cry when I leave my best friend’s house after a weekend visit.  These girls, without a doubt, are some of my closest friends and I miss them terribly every day.  The drive back home to CT was a long and thought-filled one.  In between the malted milk balls (don’t judge), I couldn’t help but think about how thankful I am to have these girls (and Elly too!) in my life.  I firmly believe that girlfriends are what make life so sweet and that the bond true friends have can never be broken.  Thank you Annie, Courtney, Elly, and Josie – I love you all and I can’t wait until we can do this again!

This recipe was brought to you by Smells Like Home:
https://www.smells-like-home.com/2012/02/a-blogging-girlfriends-weekend-in-richmond/
< back print Toggle Image