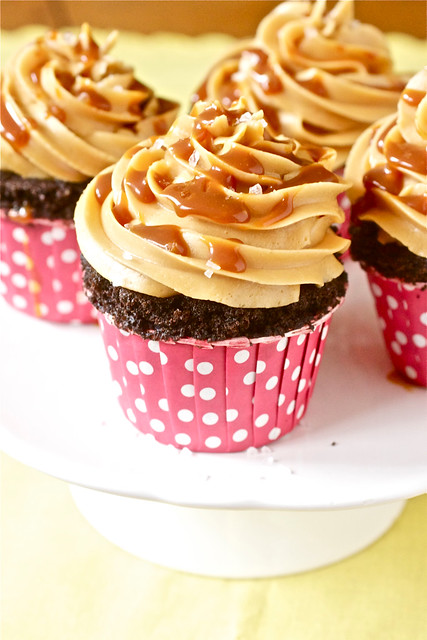 One of my absolute favorite flavor combinations is sweet and salty.  Sit me down with some potato chips and a handful of M&Ms or chocolate-covered popcorn and I’m in trouble!  So you could imagine the level of my excitement when I flipped through Baked: New Frontiers in Baking for the first time and saw my nemesis flavor combo in a cake.  Add some salted caramel to a chocolate cake and I’m pretty much done for.

Now admittedly, I’ve had this cookbook on my shelf for well over a year and I’ve yet to make the cake.   It’s hard to justify making a whole cake for only two people just for the heck of it so the cake has ended up sitting on my list for what seems like forever.  And then came Courtney’s Virtual Baby Shower.  Among the many reasons why Courtney and I are such great friends (real-life friends, not just blogging friends!), I firmly believe that our love for Baked’s cookbooks links us together.  And while I’ve never visited the famous bakery in Red Hook, Brooklyn, Courtney and her awesome husband, Eric, did a few years ago during a trip to NYC and they had a blast.  (For the record, I’m jealous.)  This cake is perfect for Courtney.  She is seriously one of the sweetest people I’ve ever met and would go to any length to help a friend, but she’s also got this “salty” side, a sense of sarcasm, dry humor, and frankness that I adore.  I was lucky enough to be able to spend a whole weekend with Courtney this past weekend with Josie and Annie in Richmond when we surprised her with a visit for a real-life baby shower.  It was an insanely fun girls weekend filled with soothing Southern comfort food, a chocolate shop that blew us all away, tons of laughs, and so many memories I have to cherish with some of my best friends. 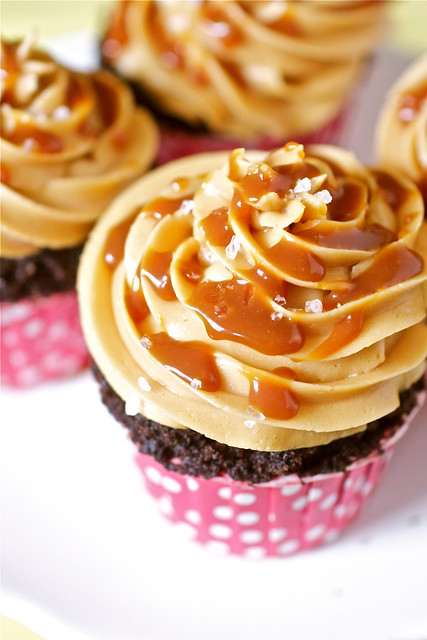 These salted caramel cupcakes are truly an outstanding creation.  I used Baked’s sweet chocolate cake recipe (next time I’ll use my favorite chocolate cupcake recipe as I miss the domed cupcakes) and merged it with Sweetopolita’s recommendation of a salted caramel Swiss buttercream.  Need I say anything else?  Rich, sweet, salty, dreamy.  Perfect for my dear friend Courtney as she prepares for baby C’s arrival in the next few weeks.  Courtney, pour yourself a glass of milk, put up your feet, and enjoy!

Josie from Pink Parsley is hosting Courtney’s shower to be sure to head over there (and to Courtney’s blog as well!) to catch up on all of the other amazing treats nearly 15 other fabulous food bloggers have contributed to the shower!

To make the frosting:

Yields: about 24 cupcakes.  For generously frosted cupcakes as shown above, increase the frosting recipe by 50%.

This recipe was brought to you by Smells Like Home:
https://www.smells-like-home.com/2012/02/salted-caramel-cupcakes-for-a-virtual-baby-shower/
< back print Toggle Image