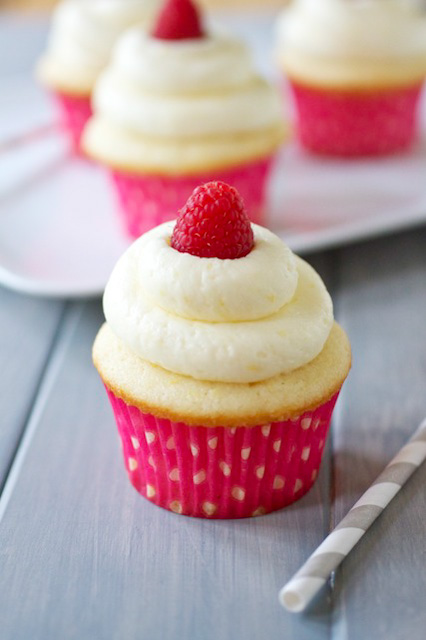 Refreshing, light, and almost whimsical, these lemon cupcakes with fresh raspberry curd filling are PERFECT for any spring or summer party!

I love it when an idea comes together.  When what I’ve been dreaming up in my head turns out just how I pictured it.  That was these lemon cupcakes with fresh raspberry curd filling.

I had made this recipe as full-on lemon poppy cake a few years back for a girlfriend’s baby shower and have since wanted to remake the recipe not only to share with all of you (because it’s pretty awesome), but also because I’ve always thought a cupcake version would be perfectly delightful.

And I was right.  The lemon cupcakes are soft-crumbed clouds with a dollop of fresh raspberry curd running through the center, topped with a billowy mound of the fluffiest lemon buttercream I’ve ever eaten.

The cupcakes themselves are sturdy and soft at the same time, a cupcake trait not always easy to achieve, and they were able to withstand a hollowed-out the center for the curd and the frosting on top without falling into pieces after the first couple of bites.

Flavor-wise, berries and citrus are a match made in heaven see also. These blackberry lime crumb bars are another perfect example of that heavenly match!

And even though you might think that these cupcakes would be too lemony and tart between the lemon cake and the lemon frosting, the bright raspberry curd keeps perfect balance.

Of course, some sugar helps with this balance as well. 😉

You’ll cone-out the center of each cupcake and add some of your very own, homemade raspberry curd, a treat worth licking the spoon for in and of itself.

Don’t cut corners and buy it! Raspberry curd is SO easy to make!

How to Make Raspberry Curd

You might be surprised that it’s quite a simple process to make raspberry curd. Raspberry curd is made with fresh raspberries that have been cooked with butter, egg yolks, sugar, and salt.

The butter adds flavor and gives the curd a silky texture. The egg yolks help to thicken the curd. And the sugar sweetens the curd, since raspberries can be quite tart.

After the mixture starts to thicken in the sauce pan, you’ll press the curd through a strainer or sieve to pull all of the raspberry seeds. What you’re left with is a thick and silky sweet sauce that, once cooled, can be spread onto biscuits or scones, drizzled over ice cream, or used however else you can dream up.

It’s a lovely and necessary component to these cupcakes and I wouldn’t skip making it.

The verdict from Kyle, the non-lemon-loving heathen that he is, was clearly indicated by the random wrappers I’ve found strewn around the kitchen.

One or two before I get home from work. Another one while I was making dinner. Two more after dinner. 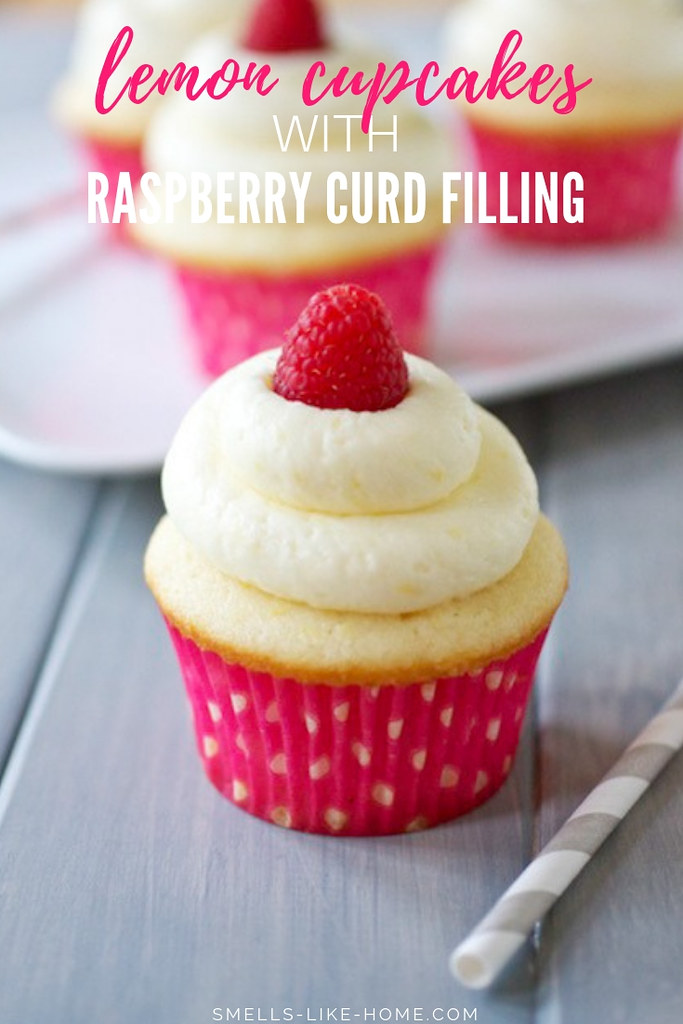 You get the point. We both adore these lemon cupcakes with fresh raspberry curd filling and I know you will too!

In fact, I love them so much that I’m contributing them to Celebrations.com Memorial Day Virtual Blogger Potluck Party that I’ve been invited to. Have a look on Celebrations (link below) to see the party as a whole and be sure to stop by the other awesome bloggers’ blogs to see what they brought to the party as well.

For the raspberry curd:

For the lemon cupcakes:

For the lemon buttercream frosting:

In the fridge, the assembled cupcakes will keep well for 1-2 days.

You'll want the raspberry curd for these cupcakes to be REALLY cold when you go to fill them - it will be too runny otherwise - so be sure to give the curd at least 6 hours in fridge to chill properly.

This recipe was brought to you by Smells Like Home:
https://www.smells-like-home.com/2012/05/lemon-cupcakes-with-fresh-raspberry-curd-filling/
< back print Toggle Image
Skip to Recipe