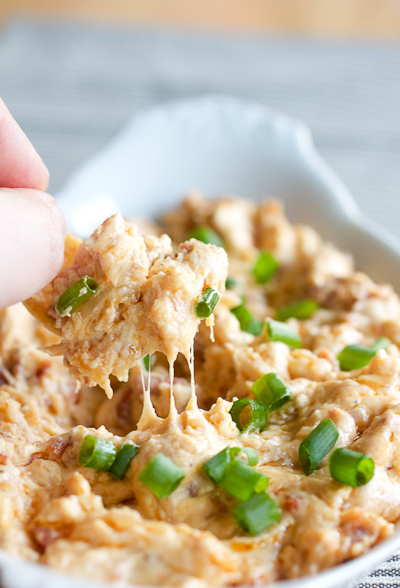 Where oh where do I begin with this cheesy chorizo and caramelized onion dip?

Maybe with the fact that it was originally made and posted as a tribute to football-loving men but that the first time I ate it was with a bunch of my best girlfriends?

I should also say that in the 6 weeks since the first time this dip was consumed (errr…devoured), it has shown up, not so surprisingly, again in my house two more times.

And each time, I swear people think this dip makes me a genius in the kitchen. 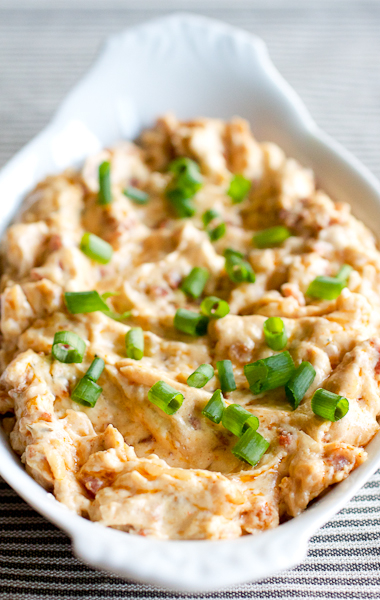 I’m certainly not feeling like a domestic kitchen goddess recently since I’ve come thisclose to royally screwing up two cheesecakes in the past two weeks but this cheesy chorizo and caramelized onion dip makes up for all of those mistakes.

The dip, in and of itself, is one sent from the heavens.

It’s base is a mixture of sweet caramelized onions, spicy chorizo sausage, cream cheese, and mozzarella cheese and when baked, you’ll need to to exercise the utmost restraint.

You’ll want to bathe in this dip.

You’ll want to huddle in a dark corner with this dip and a bag of Fritos.

But if you want to spend the next 48 hours in the gym working this dip off your holiday hips, I suggest you pass the spoon.

One of the best things about this dip is that it can be made and refrigerated a day or two in advance then baked off when you need it – just add about 10 minutes to the baking time if the dip is baked right from the fridge.  To note, I can’t find fresh chorizo so I buy it pre-cooked.  If you use fresh, extend the cooking time with the onions to 10 minutes and start cooking it just before the onions are finished so as to not burn the onions.

This recipe was brought to you by Smells Like Home:
https://www.smells-like-home.com/2012/12/cheesey-chorizo-and-caramelized-onion-dip/
< back print Toggle Image