Classic Cake Donuts might just be the MOST satisfying thing you could make for a sweet weekend breakfast! Dress them up with some sprinkles or just go for a simple vanilla glaze – the choice is yours! But I really don’t know how you’ll choose because any way you make these donuts, you’re gonna love ’em so much! 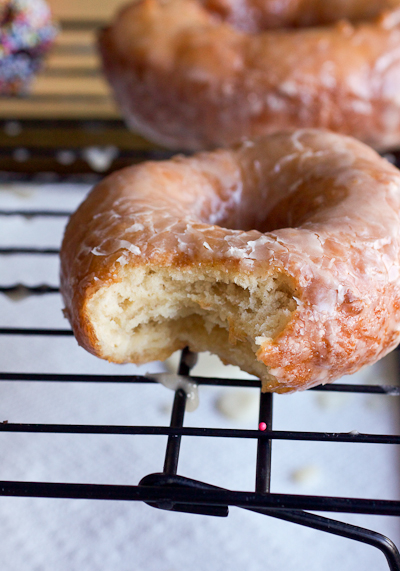 Donuts – or do you spell them doughnuts? – were never a big deal to me growing up. Well, scratch that.  Sorry.

Because we so rarely ever ate doughnuts, they were a HUGE thing to me and my brother as kids. But they certainly were a special occasion treat, like pool days at our friend Jarrod’s house.

Dude, those were the days!

We literally almost burst at the seams with excitement on those days – both about getting to swim for the day and about the Munchkins that taunted us sitting on my unbuckled lap…in the front seat of mom’s car. 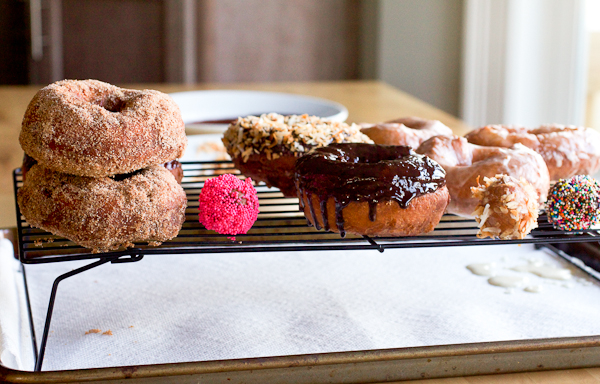 These days, as an adult, I won’t lie.

I still get pretty excited about both of these things. Pool swimming, chlorine and all, still rocks my adult world and donuts still send a thrill down my spine.

A few years ago Kyle and I found a nearby old-fashioned diner that sells the best (really, the best) donuts around.

We’re both early birds so getting up at the crack of dawn to get warm, fresh donuts a few times a year is never an issue and it makes for a fantastic start to a Sunday.

Anyway, I’ve been wanting to make donuts like our favorite diner cake donuts at home for ages, and these were pretty spot-on to our favorites.

Once the dough hits the hot oil, it puffs up and creates this fantastic crunchy exterior while still keeping the inside soft and light.

How To Dress Up Your Donuts

There are so many ways to do this, isn’t there? Here are a few of our favorites:

Rolled in cinnamon-sugar right out of the fryer? Absolute perfection.

Draped in vanilla glaze? Not so horrible either. 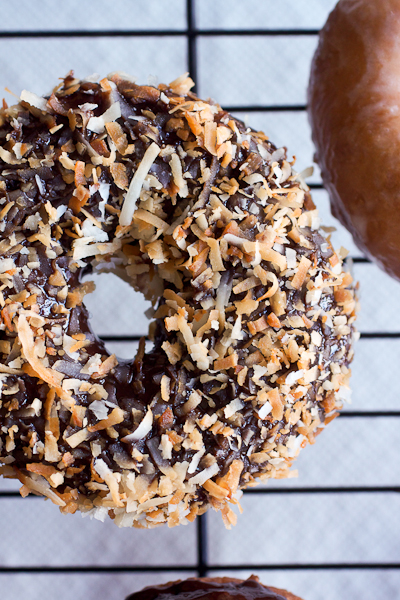 These donuts are without a doubt a special occasion treat and being that they take about 2 hours to make, I can’t see us making them often. But when that homemade donut hankering hits again, we’ll be ready!

Maybe even for the pool days that lie ahead of us this summer.

Travel note:  Seriously, if you traveling I-84 through Connecticut, get off at exit 15, drive north on Rt. 67/6 into Woodbury (about 3.5 miles) and stop at Dottie’s Diner on the right.  It’s a light blue building at the end of a short row of stores.  Freaking.amazing.doughnuts.

For the cinnamon-sugar mixture:

For the chocolate glaze:

For the vanilla glaze:

To cut the dough for these donuts, any round cutter will work - biscuit or cookie cutters are perfect. In a pinch, you could also use a glass or just cut them out by hand with a knife. If you don't have a donut cutter, you'll also need something to cut out the centers and a large round pastry tip works great for this. We got 8 really big donuts from this recipe and would likely make them smaller the next time as they were almost overwhelmingly large.

adapted from allrecipes.com via How Sweet Eats | coating/glazes adapted from Annie's Eats

This recipe was brought to you by Smells Like Home:
https://www.smells-like-home.com/2013/04/classic-cake-doughnuts/
< back print Toggle Image
Skip to Recipe