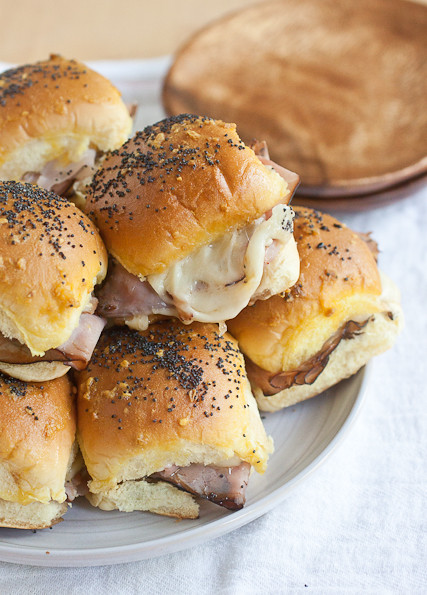 This shouldn’t be a surprise to you, but as a kid, I wouldn’t touch a ham and cheese sandwich with a ten foot pole.

And I really can’t pinpoint the moment when I changed my mind, though it was well before I made these baked ham and cheese sliders for the first time last winter.

It may have happened when I made these croque monsieur sandwiches. Not a bad way to change your mind about something, right?

But it was because ham and cheese has become one of my favorite sandwich choices as an adult that I was dying to make these sliders for so long. 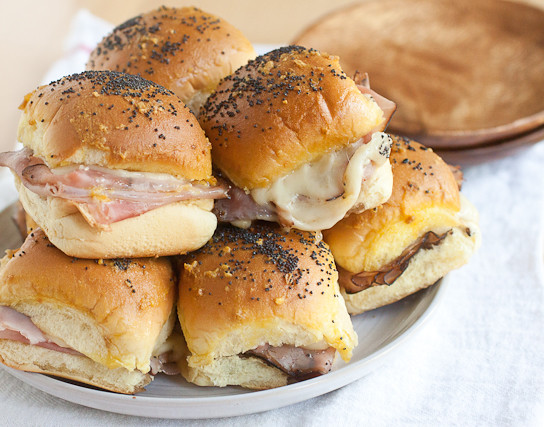 These sliders are definite rivals to those French sandwiches!

The best thing yet though, is that they are no harder to make than a regular ham and cheese except that they’re baked with this incredible sauce poured over them.

You’ll mix up a quick butter-mustard-Worcestershire sauce – sounds weird, I know, but stick with me here – then pour it over the prepared sliders, sprinkle on a few poppy seeds, and bake ’em up.

The sliders come out of the oven in the form of a toasty, amped up version of the old standby sandwich. It’s after the melted butter sinks into the bread that the magic happens!

When I served these baked ham and cheese sliders for the first time at our housewarming party last December, I could barely get them out of the oven before people were grabbing them right off the baking sheet!

So, the only thing I could suggest about these sliders is to make more than you think you’ll need for your next party. You won’t need to worry about having leftovers!

Try to find King’s Hawaiian dinner or slider rolls for these sliders. I’ve used Martin’s potato rolls (dinner roll size) the handful of times I have made them and they are always great. Alternatively, regular dinner rolls or slider buns will work perfectly too.

adapted from The Girl Who Ate Everything via Annie’s Eats

This recipe was brought to you by Smells Like Home:
https://www.smells-like-home.com/2013/09/baked-ham-and-cheese-sliders/
< back print Toggle Image