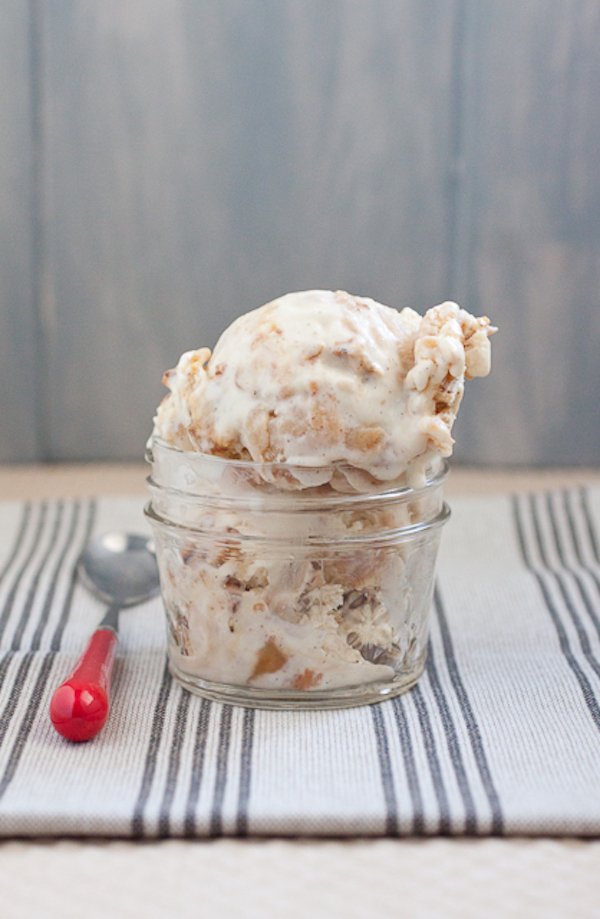 While I may not make a lot of ice cream in the fall and winter months, there is certainly still a basic human need for it. Like on top of pie. Or warm brownies. Or cobbler.

I guess you could say that I prefer ice cream in the fall and winter to “go” with something warm. This isn’t a hard-and-fast rule however, because I also dream of pumpkin ice cream that I like to make before it’s time for peppermint to take over my life in December. But this apple pie ice cream recipe is one that definitely can go either way.

The ice cream itself, as the name implies, is like eating ice cream, pie, and cookies all in one dessert. And it’s magical! We just happened to serve it over some apple slab pie because hey, what’s wrong with a double-dose of apple pie for dessert?

Here are the components you’ll need to make this phenomenal dessert (keep scrolling down to the recipe cake for the full set of ingredients and instructions):

I guess you could otherwise call this apple crisp ice cream but I went with cookie ice cream here since the oatmeal praline crumbles reminded me so much of these crispy toffee oatmeal cookies. The little chunks of praline add a bit of crunch and texture to the creamy ice cream.

If you want to skip the oatmeal praline – although it only does take a couple minutes to make and can be made 1 week ahead –  might I suggest adding chopped up oatmeal cookies here instead?

If you really want to go all out, make some pie dough and bake the dough in cut up pieces on a parchment lined baking sheet. After they’ve cooled, mixed them into the ice cream after you’ve churned it.

Can we just call this ice cream heaven? And for the record, there’s no need to hide how much time you’ll spend standing over the ice cream container scooping the softened edges of this ice cream.

For the ice cream base:

For the apple pie filling:

Do Ahead: There are a couple different steps to making this ice cream but all of them can be prepared in advance. The ice cream base mixture and oatmeal pralines can be made up to 1 week ahead and kept in separate resealable containers in the refrigerator. You can make and chill the apple pie filling 1 day before you churn your ice cream and the whole dessert can be put together up to 1 week before you serve it.

adapted from The Perfect Scoop by David Lebovitz via Annie's Eats

This recipe was brought to you by Smells Like Home:
https://www.smells-like-home.com/2013/11/apple-pie-oatmeal-cookie-ice-cream/
< back print Toggle Image
Skip to Recipe