My Bacon Cheddar Ale Soup is an easy take on classic pub food. Creamy, cheesy, bacony, and with a touch of ale flavor, this soup recipe is a winter night’s winner of a meal. 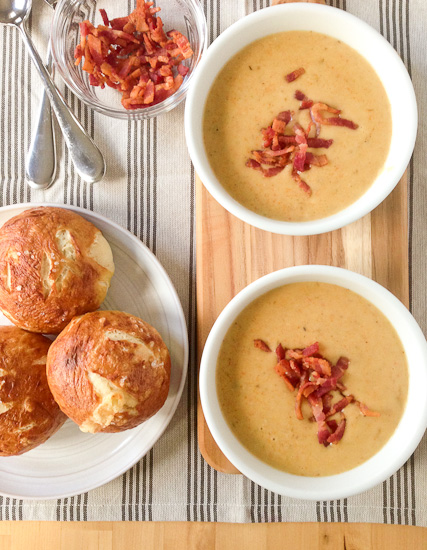 It’s hard to describe how picky I am about certain things. Soup is one of those things.

In my [not so] humble opinion, creamy soup recipes, like my creamy chicken orzo soup, should be in fact, creamy and not even a little bit watery.

And broth-based soups, like a classic chicken noodle soup, should have enough substance to them to consider them a meal or at least a light meal. They, of course, should not have too much substance so that there’s no liquid left to slurp.

I don’t know. I can’t be the only one who feels like way, can I?

One of my favorite local restaurants, which has the best wings around BTW, is also really well-known for their cheddar ale soup.

To me, it’s a mighty fine soup, except that it lacks just a teensy bit in the ale flavor. But the texture is spot-on and it’s so creamy that it almost takes two licks of the spoon to clean it.

I almost always order a cup when I’m there, even in the middle of summer. And for years, I’ve considered trying to duplicate the soup at home. 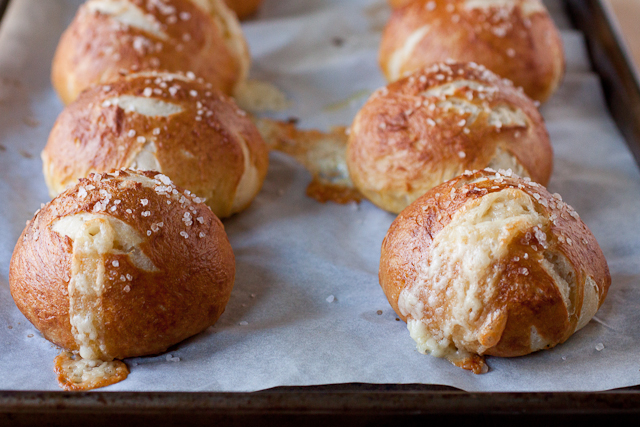 So along with those cheddar-filled soft pretzel rolls I attempted to make a few times last year/winter came a few attempts at making this bacon cheddar ale soup as well.

And what I’ve learned from those experiences is that combining beer with a milk product in the wrong ratio can produce a truly horrifying result. It’s awful, trust me.

I should have known this already based on a failed beer mac and cheese recipe I made last winter. Those were dark days in my kitchen.

But after tweak here and a fiddle there, I finally found the right combo for this soup!

How to Make Cheddar Ale Soup

And it’s SO easy to make too! You’ll start with bacon, then add chopped veggies, flour, beer, broth, and milk. You’ll simmer the soup for a few minutes and then add some shredded sharp cheddar, which will melt beautifully into the soup. 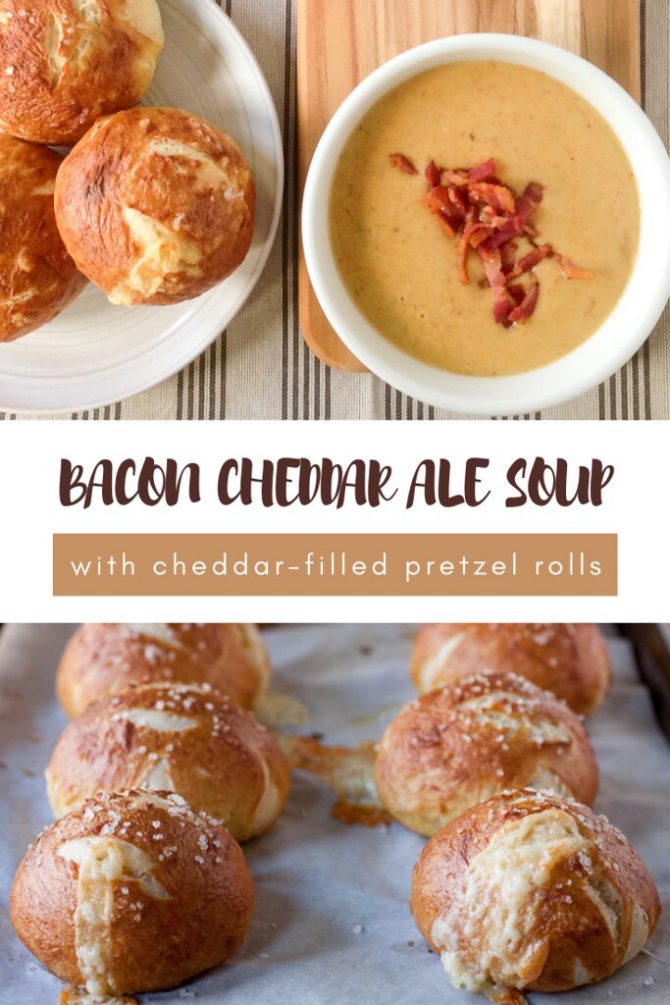 Any recipe starting with bacon and ending with cheese should already stop you in your tracks. Am I right?!

It’s quick enough to make on a weeknight, especially if you cut the veggies in advance. And it’s one of those fill-your-belly soups that won’t leave you hungry an hour later. Win-Win!!

What to Serve with Cheddar Ale Soup

I strongly suggest that you dip some some of soft pretzel into this soup! I made pretzel rolls to go with this bacon cheddar ale soup which gave us one heck of a perfect wintery night comfort meal.

Biscuits would be perfect too! Store-bought is fine but homemade biscuits are SO MUCH better! My first choice would be these buttermilk drop biscuits but these 5 ingredient cream biscuits would be amazing too.

If cornbread is more your thing – and how could it not be?! – go with my skillet cornbread recipe with a smidge of honey butter on top!

Of course, soup doesn’t have to be a main course! Cheddar beer soup and the ultimate grilled cheese anyone?

Or how about this soup as a starter to a delicious roast chicken dinner? Sign me up!

To make this a vegetarian cheddar ale soup, saute the vegetables in 3 tablespoons of canola oil or unsalted butter instead of the bacon fat and swap the chicken broth for veggie broth.

This recipe makes 2 good-sized dinner servings or 4 appetizer servings but the recipe can be easily doubled. Depending on the strength of your beer, you may want to adjust the amount you add according to your tastes. A half bottle (6 oz) in the recipe here adds a good "punch" of beer flavor to the soup without overwhelming it.

This recipe was brought to you by Smells Like Home:
https://www.smells-like-home.com/2013/12/bacon-cheddar-ale-soup/
< back print Toggle Image
Skip to Recipe