Dulce de Leche Overnight Cinnamon Rolls are a fantastic way to start your day! With all the prep done the night before, you an wake up and pop these rolls in the oven while the coffee is brewing. 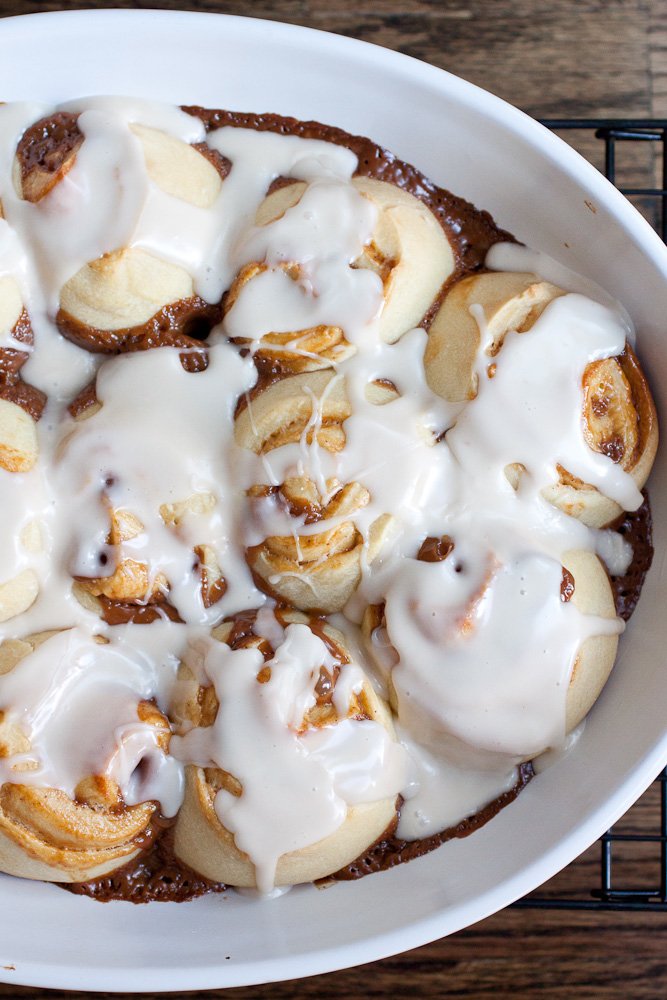 As many of you have already noticed, I’ve been taking a little break from this space for a little while. Thanks to all of you who have written to check in and who expressed concern.

Things are good here, actually. I decided at the end of last year that I needed to declutter my brain. Between the time I was spending on the computer each day during work at the office and at home on email/the blog/social media/reading blogs/etc., I felt like I was frying my brain.

I was starting to have trouble concentrating, prioritizing, making decisions. Basically, I was in overload. And I didn’t like it.

I was sacrificing important things like time with Kyle, my hobbies (like reading and cooking), and sleep. I was dragging all day long, didn’t want to cook at night, and I started to feel like my blog was becoming a chore.

I like this little space here on the internet that I’ve deemed my own and I like sharing it with you. But in the past few weeks, I realized (remembered?) that I also really like my sleep, and my hobbies, and of course spending time with Kyle, all without feeling chained to the computer at night. 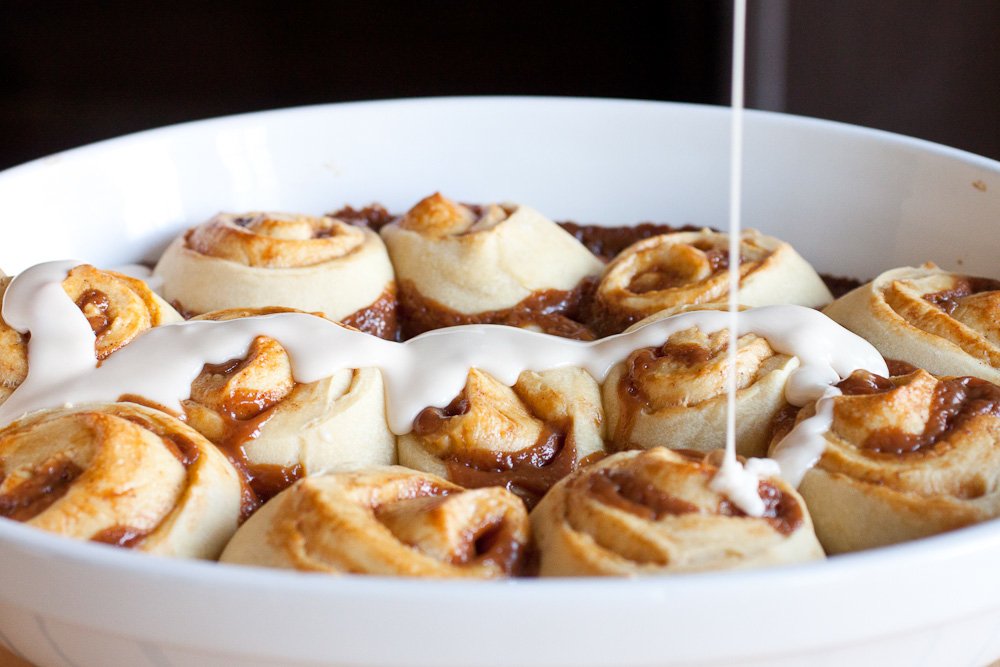 To sum it all up, I’m making some sacrifices now in order to keep myself happy and to keep from completely reaching the point of burn out later. If I only get to post a recipe here once or twice a week, that’s all I’ve got.

You can be sure they’ll all still be really great recipes, like these dulce de leche overnight cinnamon rolls. And you’ll still find me posting stuff over on Facebook or on a Pin binge every so often.

I do hope you’ll stick with me and understand at the same time that I need to prioritize my happiness in order to allow everything else I do to work properly. 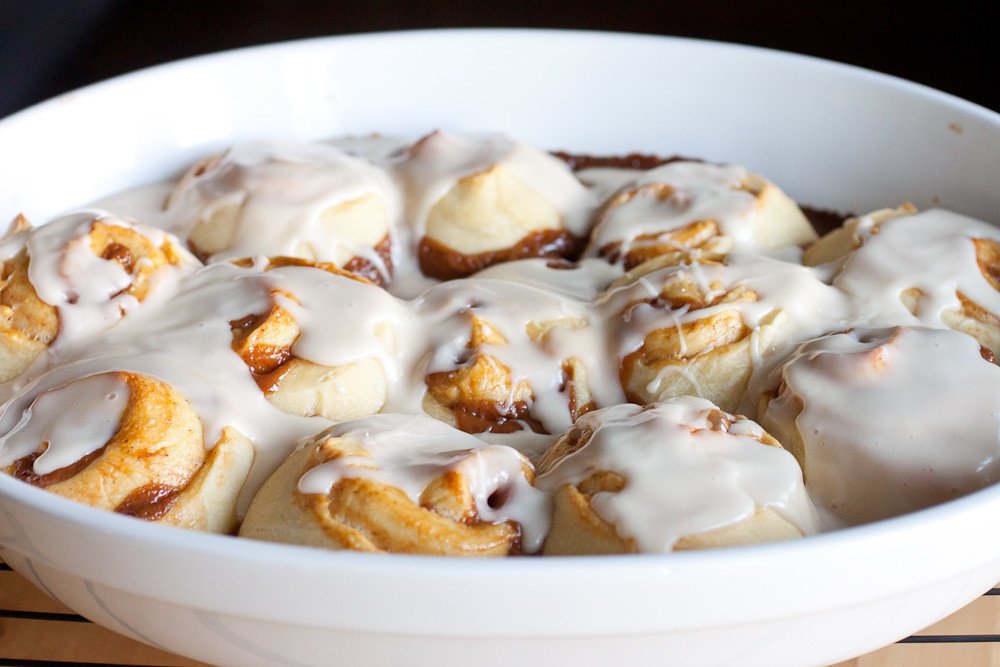 Now, about those cinnamon rolls…

Holy heck! We certainly started the new year off well with these super indulgent rolls for breakfast on New Year’s morning. I took to starting a [now miserably failed] sourdough starter recipe later on that day but the day began with a pan of beautifully risen rolls oozing with a bubbling cinnamon maple dulce de leche filling.

Can I Make These Rolls in the Morning?

You could…if you want to get up in the wee morning hours. Because this recipe is for an enriched dough, it needs a longer proof time. An enriched dough includes eggs and butter, both of which slow down the yeast growth in a recipe.

This means the dough needs a much longer time to proof than say, pretzel dough, in order for the yeast to activate properly in the dough and create a soft textured-dough.

Here’s the basic list of ingredients you’ll need for this recipe. Be sure to check out the full list below in the green recipe card.

Where to Find Dulce de Leche

These cinnamon rolls were one of the better ideas I’d had in a while. We found the maple dulce de leche at Stonewall Kitchen while in Maine on our Christmas getaway and meant to put it out for the waffles we made for our friends a few days after Christmas but forgot. Oops!

That maple variety was a seasonal variety of the caramel sauce so Stonewall Kitchen might not offer it year-round. So, any kind of dulce de leche will do here and if you want to make your own, I highly recommend trying it!

You can find dulce de leche at other specialty food stores as well, like Williams-Sonoma or even in local shops. 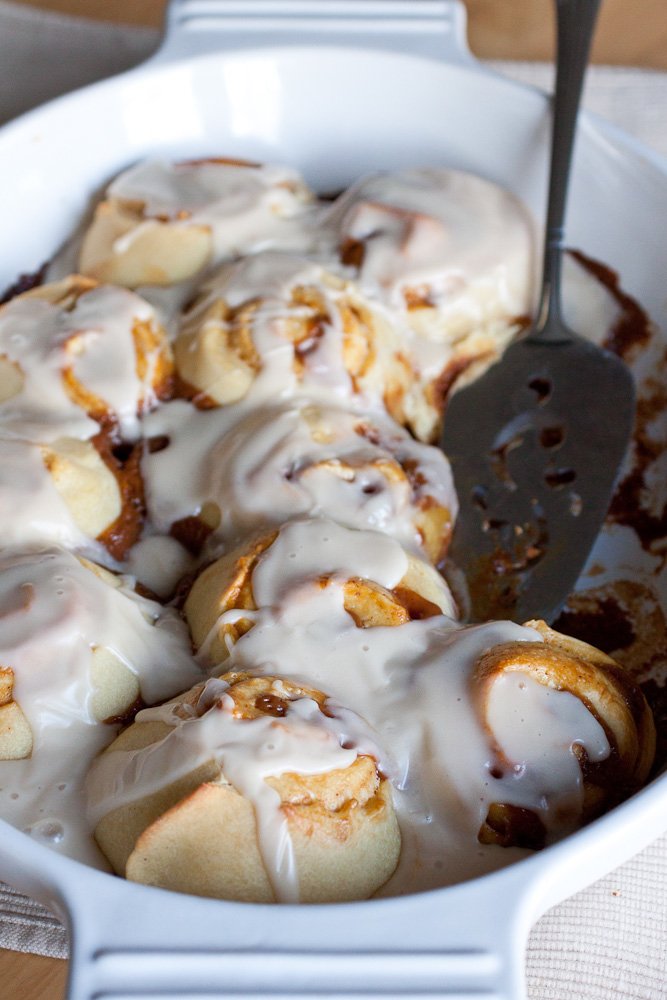 For the vanilla glaze:

This recipe was brought to you by Smells Like Home:
https://www.smells-like-home.com/2014/02/dulce-de-leche-overnight-cinnamon-rolls/
< back print Toggle Image
Skip to Recipe