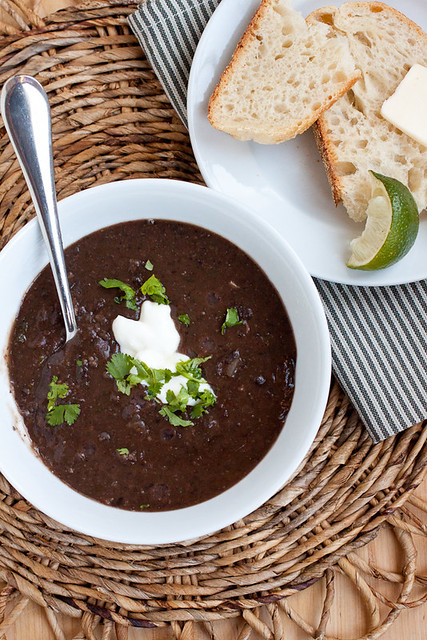 There’s this little independent bookstore café in New Haven, right in the heart of the city’s shopping area as well as Yale University’s art district and on the fringe of the iconic dormitory colleges which still make me feel like I’m walking around Hogwarts rather than a New England small city.

Atticus is the name of this place and I’ll admit that I don’t go there for the books.  I go for the black bean soup.

And the bread but that’s another story for another time.

For years I’ve been planning to replicating this smoky black bean soup at home and after a few close attempts, I finally nailed it.

The key, which I remembered upon a recent bowl at lunch, was that the soup Atticus serves is not vegetarian; it’s made with a base of sauteéd bacon.

Let me tell you, the bacon makes aaaall the difference here!

That smoky bacon boosts the flavor of the cumin and is the key to bring the soup together.

This smoky black bean soup recipe is a very basic one and now that I’ve got it down pat, I can start obsessing about replicating Atticus’ ciabatta rolls.

This recipe was brought to you by Smells Like Home:
https://www.smells-like-home.com/2014/02/smoky-black-bean-soup/
< back print Toggle Image