One Pan Farro with Tomatoes

One Pan Farro with Tomatoes is a hearty and delicious meal! Farro is cooked with tomatoes, onions, and garlic and it soaks up all the great flavor leaving you with an unforgettable and super simple dinner. 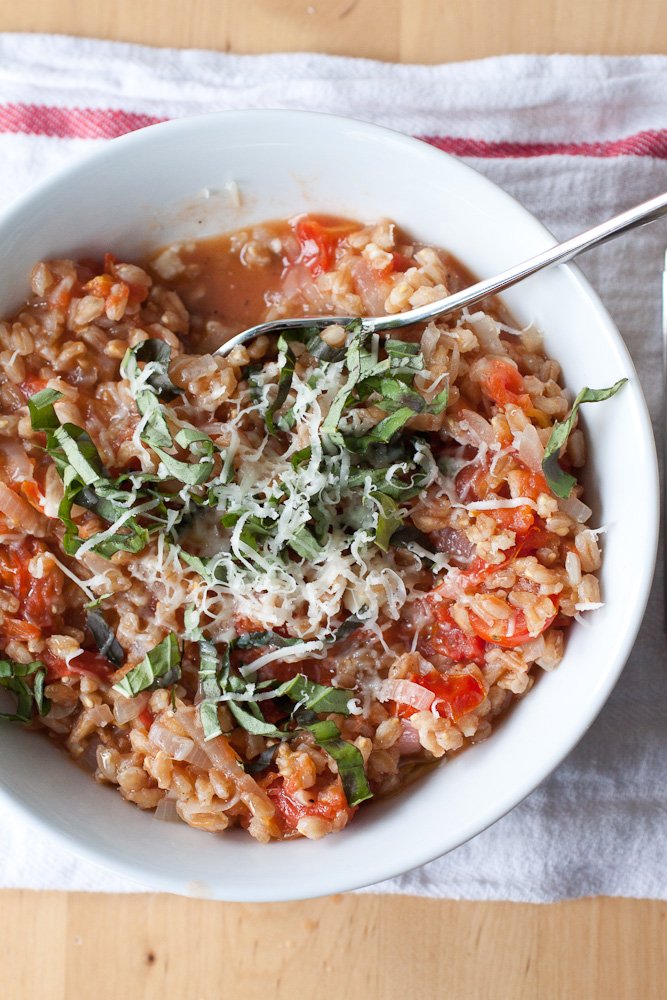 After nearly 12 years of feeding Kyle, I’ve pretty much got it figured out about what he’ll like, love, or not care for when I’m menu planning each week.

It may seem strange to cook things he thinks he’s not keen on but how else do you get people to try new things? I’m not about to beg! This really isn’t all that different than feeding a child is it?

This one-pan farro with tomatoes was one of said meals. He actually turned his nose up at this one!

But like a Washington politician, I did a little spinning and told him this one was similar to his favorite caprese pasta salad that we’ve been making for nearly all 12 years, except with whole grains instead of pasta and no mozzarella.  It basically sold him immediately and he ended up really really loving this meal.

As the name suggests, everything is cooked in one pan (I love that!!) and while you don’t think the tomatoes could possibly soften in 15-20 minutes, they turn out close to my favorite 3-ingredient quick sauce while helping to flavor the farro.

Farro, if you’ve never had it, sort of cooks to the consistency of risotto but without the classic risotto creaminess. It’s a little nutty and it’s definitely a hearty whole grain that will keep you full for longer.

There’s a little bit of a chewy bite left to the cooked farro that I find addicting and when combined with garlic, basil, tomatoes, and some sharp pecorino-romano cheese, this meal has become one of our favorite healthy meatless meals in the past few months.

No surprise to me, of course!

What to Serve with Farro

This is a hearty meatless meal that can stand completely on its own. However, if you want to stretch it to serve extra people or have a meat-eater in the house who needs his/her meat at every dinner, consider roasting or grilling some pork, chicken, or turkey sausages to serve on the side of the farro.

Or slice up the cooked sausages and mix them into the farro! Grilled or sauteed chicken would be a great option as well.

This recipe was brought to you by Smells Like Home:
https://www.smells-like-home.com/2014/06/one-pan-farro-with-tomatoes/
< back print Toggle Image
Skip to Recipe