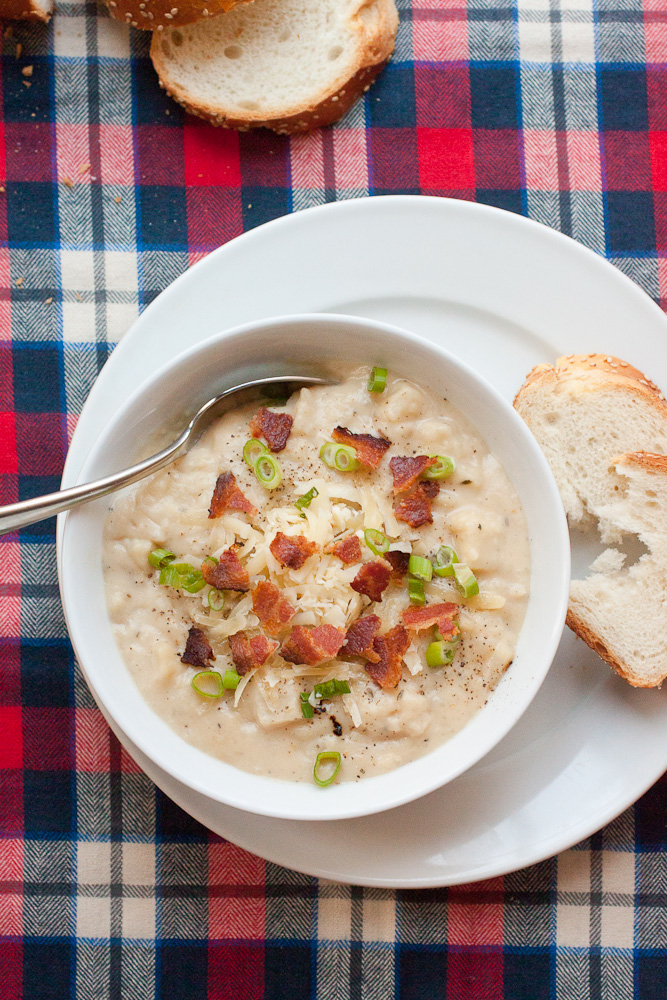 This crock pot loaded baked potato soup recipe is comfort food at its best with hunks of potatoes nestled in a thick soup base and covered up with my favorite toppings.

‘Tis the season for all the carby things!  And boy, does this crock pot loaded baked potato soup fit the bill.

One of my favorite foods of all time is a heavily loaded baked potato with lots of ground pepper sprinkled on top.  In fact, in preparing for my first weekend home from college freshman year, my mom asked me what I was craving.  It was steak and a baked potato.

Really, it’s the simple things in life, isn’t it? 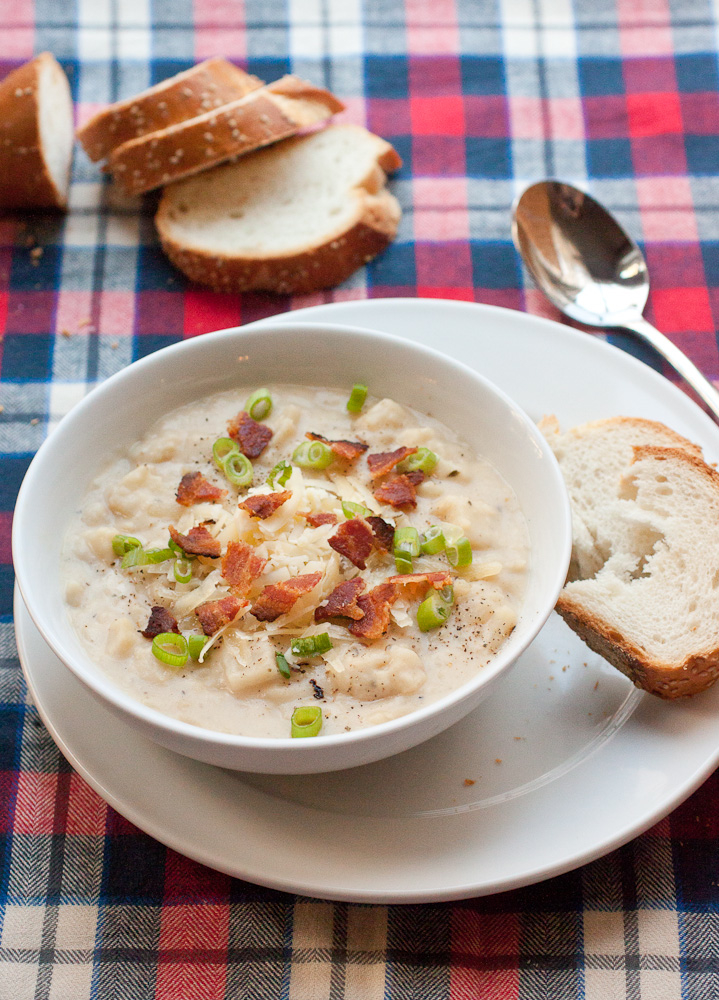 So you can imagine how insanely happy this soup made me as the weather really started changing a couple weeks back, with foggy, cold mornings followed by clear and crisp days that seemed to go on forever.

I made this soup on a recent Sunday, not a day I usually pull out the crock pot. But we had planned a pumpkin and mums expedition in the afternoon after Kyle finished up some of his side work (say hello to life of a contractor’s wife), and I knew I wouldn’t want to cook dinner when we returned home. 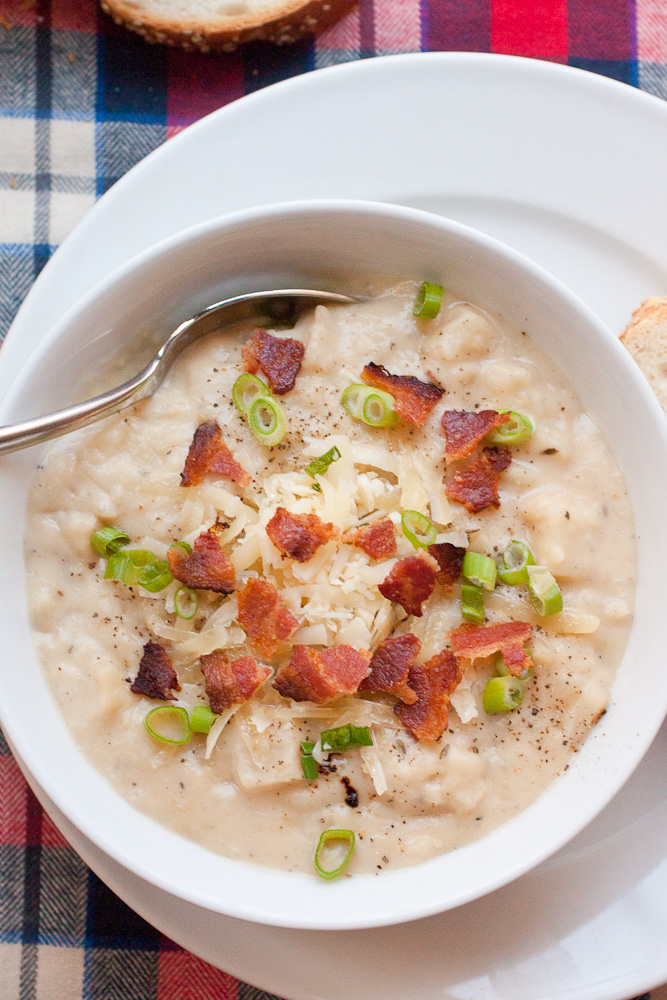 And I was right. Because as we crunched through the leaves in the front yard to oh so strategically place those pumpkins and mums on the front steps, all I could think about was wrapping myself in a blanket on the couch in front of the fire and catching up on the DVR for the rest of the day.

Gather Up Your Toppings for this Loaded Baked Potato Soup

Within a few minutes of heading inside, we dunked the ladle into the crock pot and pulled out this steaming baked potato soup. We loaded it up with Cabot’s finest, crumbled bacon, scallions, and a heavy crank of fresh ground pepper.  If I had planned better, sour cream would have been involved too!

If I were to go a little healthier with the toppings, I would add some roasted broccoli in place of the bacon. But I’d keep the cheese, of course! 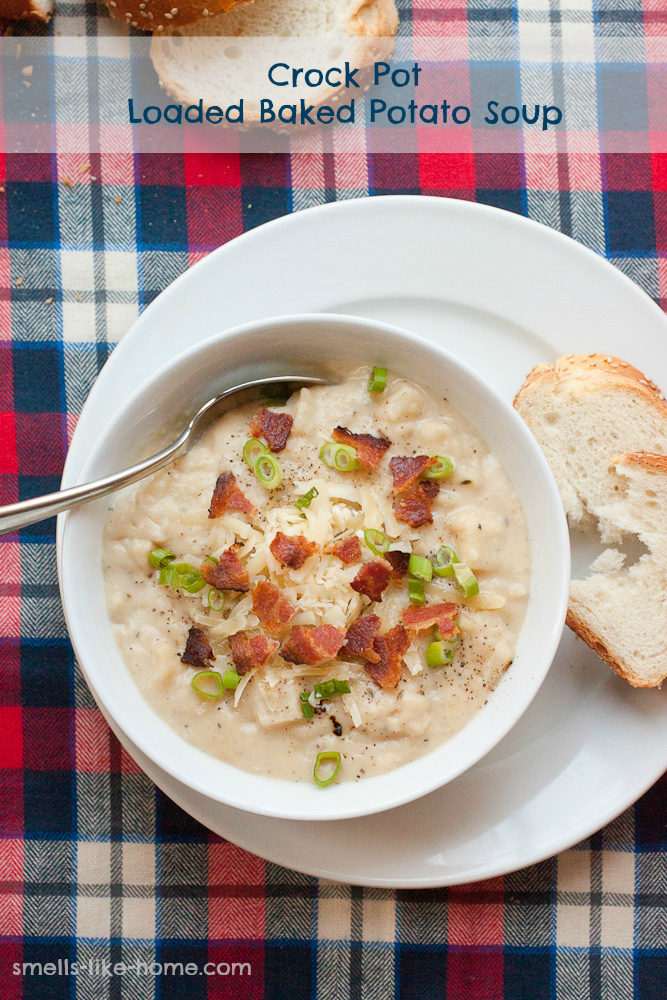 So right off the bat, this loaded baked potato soup is quick to prep. You’ll:

This crock pot loaded baked potato soup couldn’t be an easier meal to prep before work for a cozy weeknight meal or on a busy weekend while you shuffle the kids around to activities!

To speed up your day-of prep time, you can dice the potatoes the night before you need them and keep them in bowl or pot of water (both should be covered) at room temperature. The water will prevent the potatoes from turning brown. Drain the potatoes well before adding them to the crock pot.

This recipe was brought to you by Smells Like Home:
https://www.smells-like-home.com/2014/11/crock-pot-loaded-baked-potato-soup/
< back print Toggle Image
Skip to Recipe