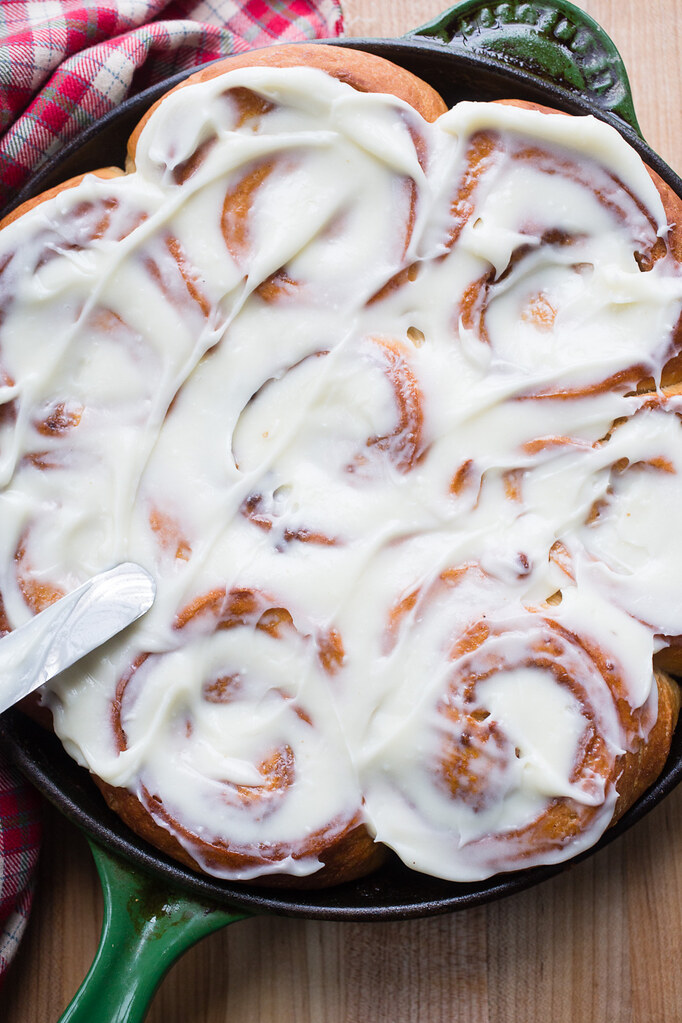 If there was ever something in this world I could faceplant into, aside from a bowlful of buttercream frosting, it’s a plate of cinnamon buns smothered in cream cheese frosting. Ugh!

I have this major cream cheese weakness. It started with growing up in the land of bagels (aka Long Island, NY) and just continued to spiral. 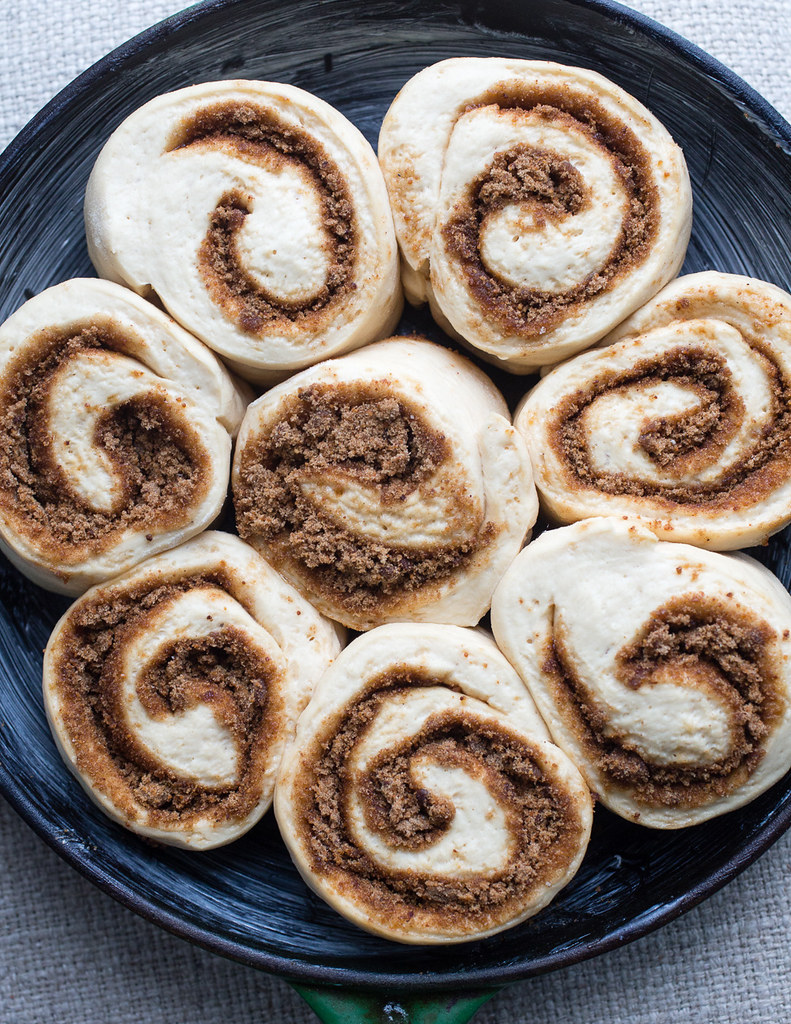 That classic 1990s cream cheese and hot pepper jelly appetizer my gramma used to serve at every holiday she hosted? Still down with it. Thank goodness for Stonewall Kitchen’s hot pepper jelly!

Cream cheese and grape jelly sandwiches as kid? Was that a thing for you? It was one of my faves! 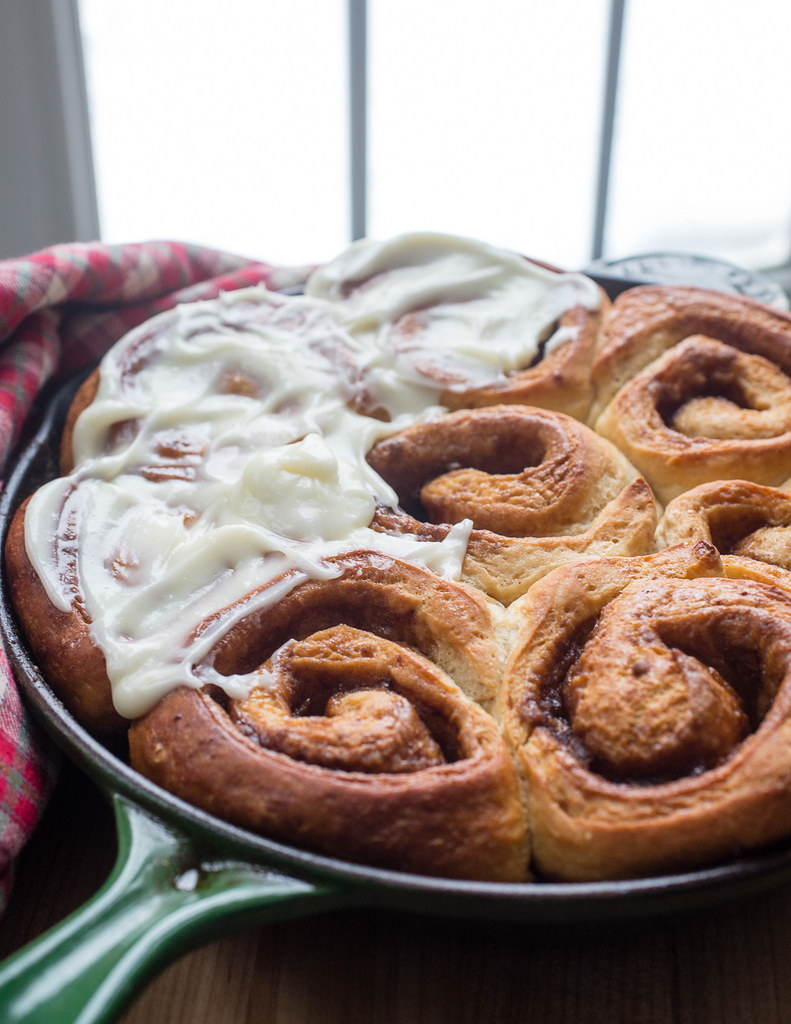 What about a cinnamon bun that’s been smothered with cream cheese frosting? That’s a big fat NO from me! 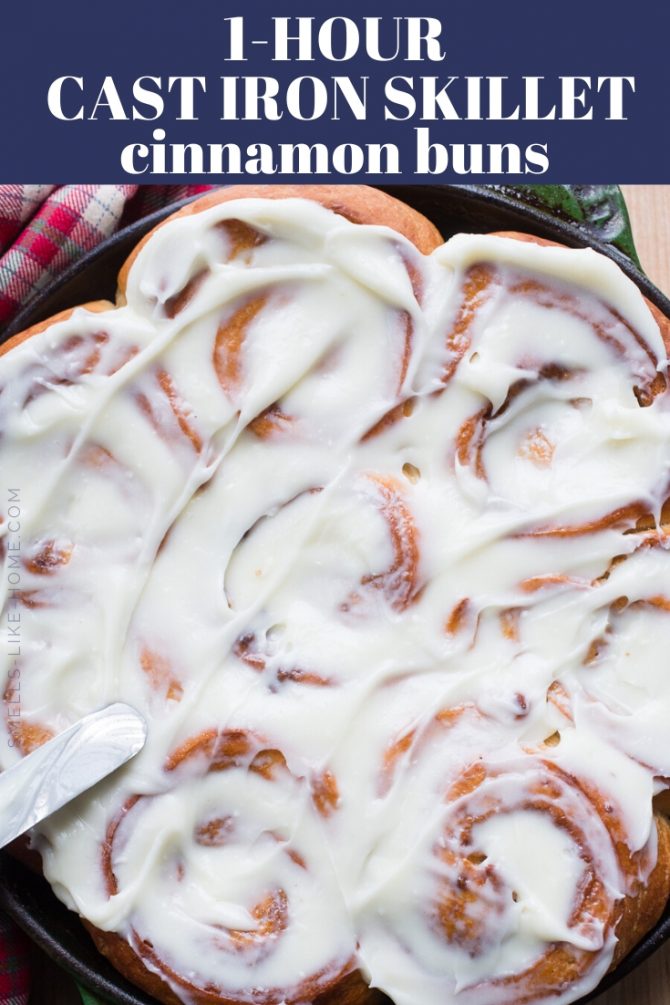 Glaze or Frosting for Cinnamon Buns?

Speaking of cream cheese frosting, are you Team Frosting or Team Glaze for your cinnamon buns? 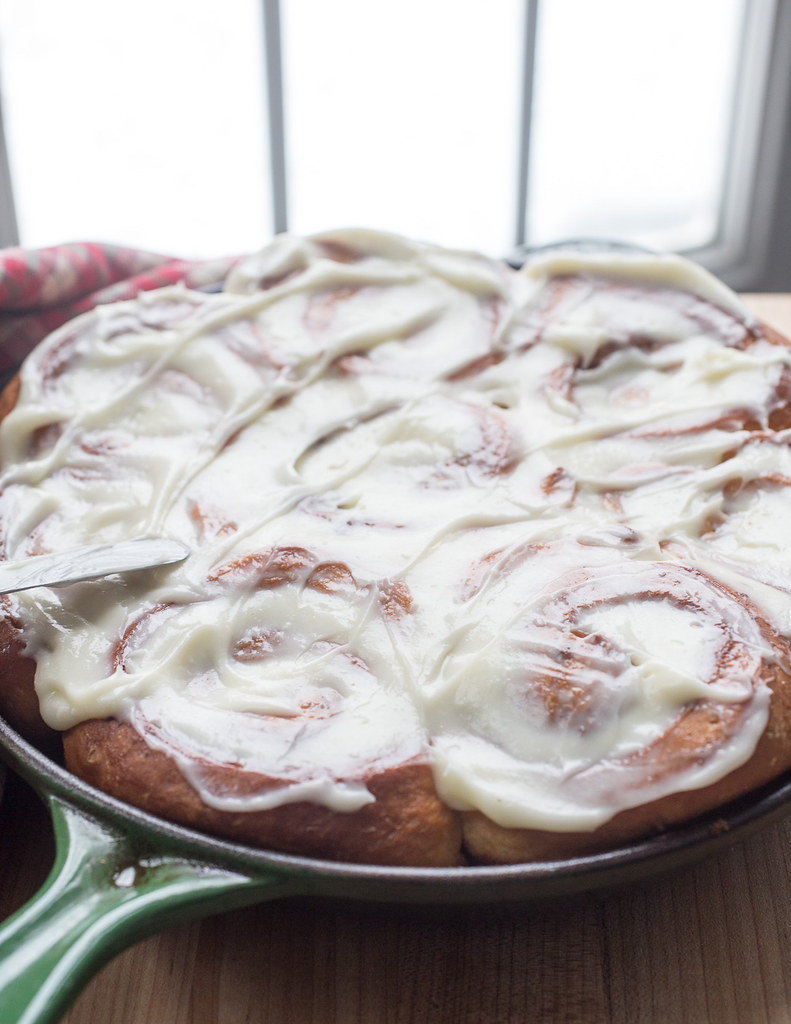 If you’re at all familiar with the popped can variety of cinnamon buns so many of us grew up eating, you’re probably team frosting on your cinnamon buns. I’m WITH YOU!

This cream cheese frosting is a really, really great copycat of those little cans that come with the popped dough. It’s just SO GOOD! And what makes it so much better than the canned stuff is that it only has 6 normal, easy to find, pronouncable ingredients. I love that about homemade recipes!

If you’re Team Glaze for cinnamon buns, I certainly won’t give you the side eye. Because really, I wouldn’t turn down a cinnamon bun covered in a thick, sweet glaze either. 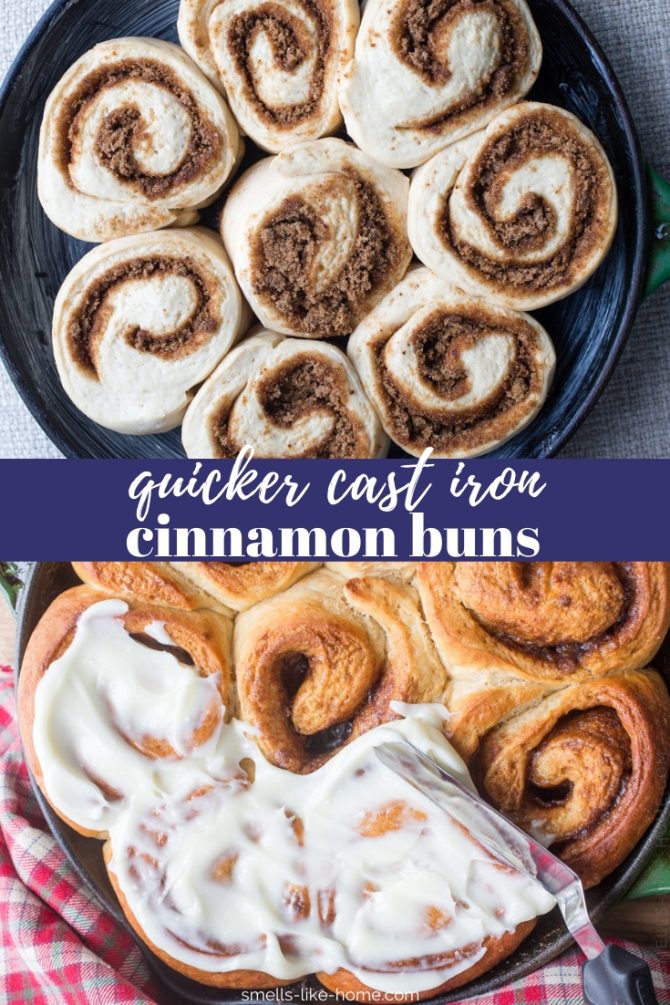 Made with a heavy hand of yeast and some baking powder, the dough – made, kneaded, rolled up with filling, and sliced all in one big step – rises up quickly without compromising the flavor that a longer-rise dough provides. You’ll only need to allow the dough to rise once for 30 minutes!

How fantastic is that?! 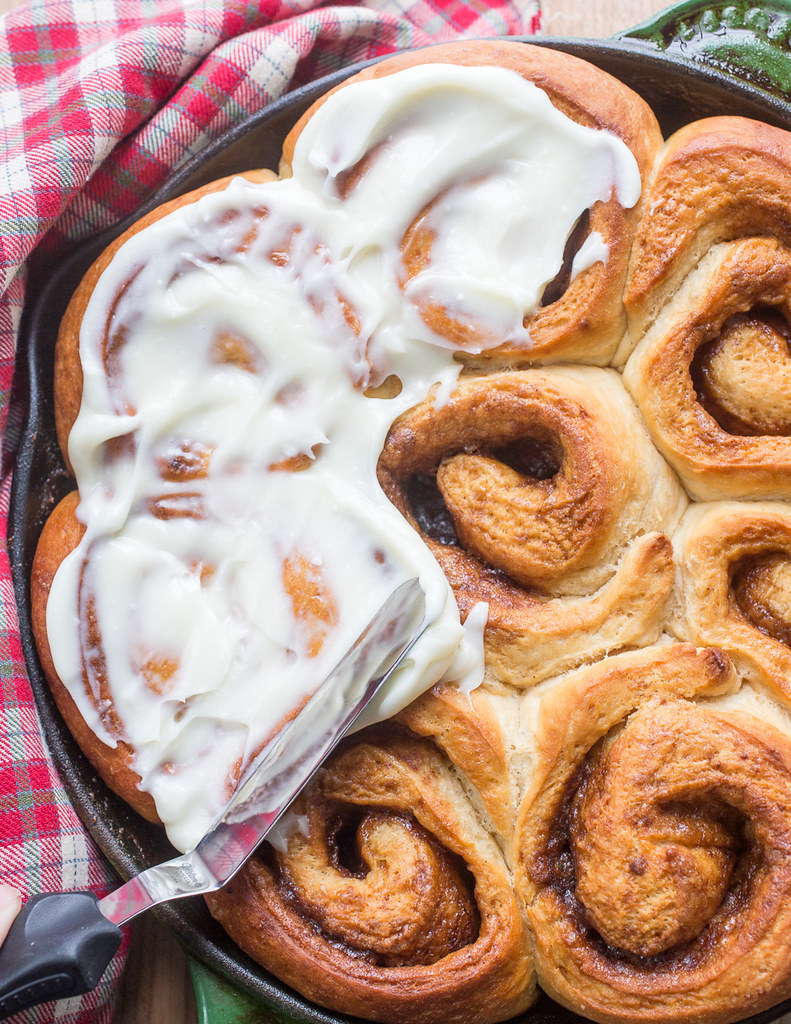 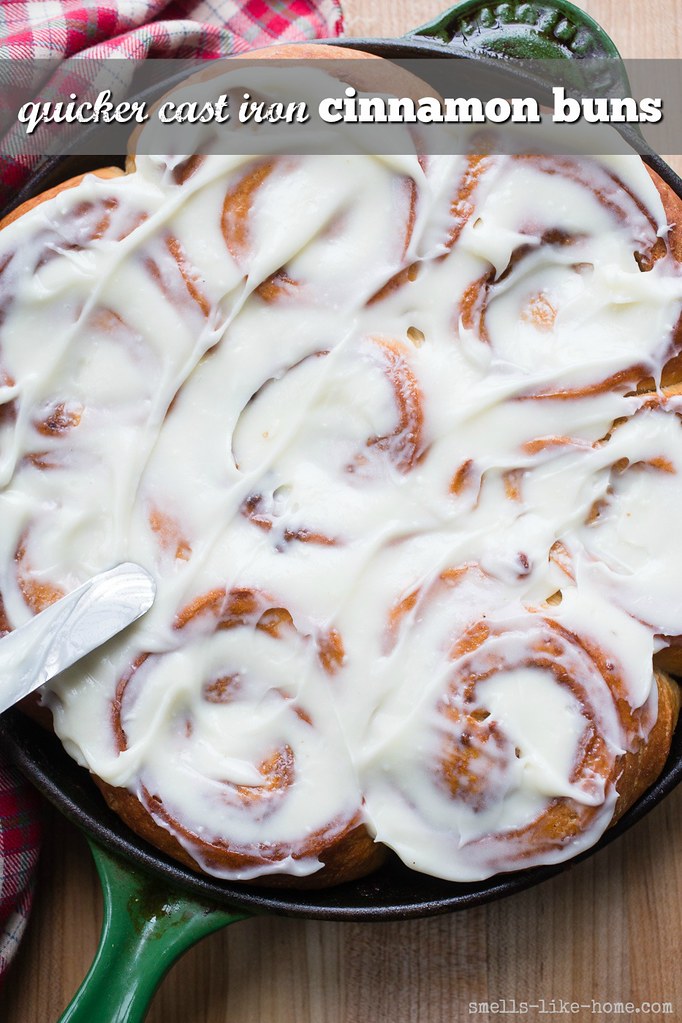 And speaking of lazy weekend mornings, why not make an iced or hot latte or even an iced pumpkin spice latte at home to go with these cinnamon buns so you never have to get out of your slippers to have your favorite coffee shop drink?

For the cinnamon buns:

This recipe was brought to you by Smells Like Home:
https://www.smells-like-home.com/2017/03/quicker-cast-iron-cinnamon-buns/
< back print Toggle Image
Skip to Recipe