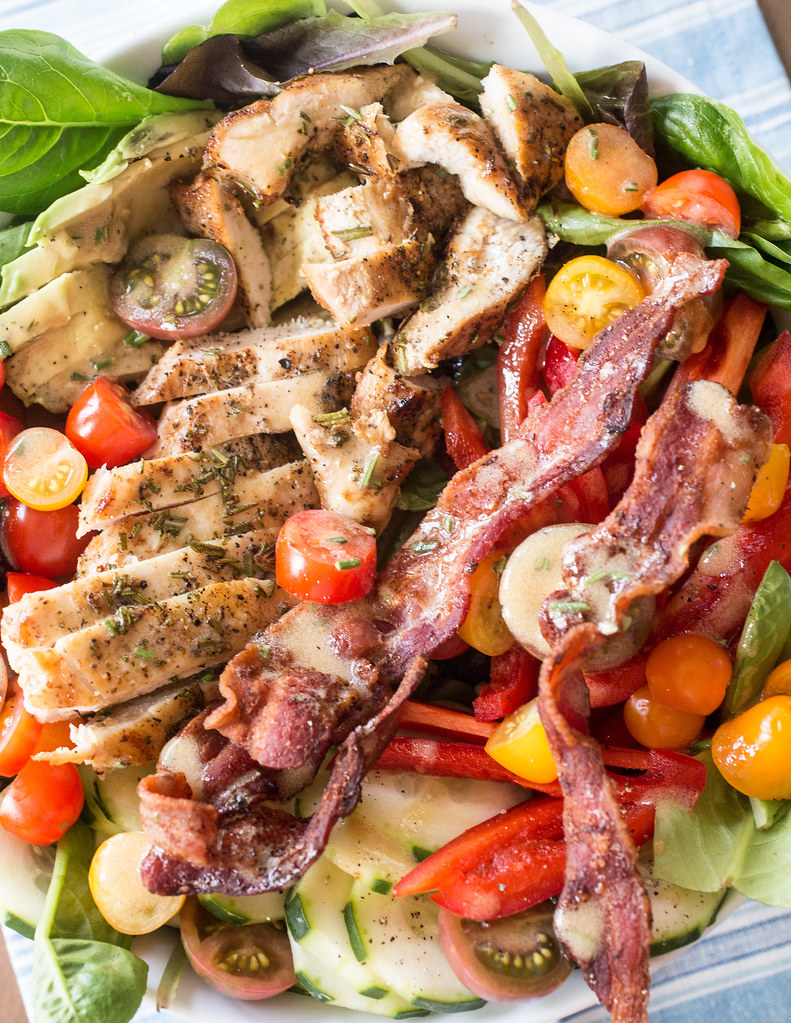 With this rosemary chicken bacon avocado salad, you’ll have no excuse to not reserve a seat on the dinner salad train forever and ever.

Are you guys into the dinner salad thing has much as I am? Unbeknown to myself, I’ve made both of us really big fans of these giant, loaded, chopped salads, as if I’m an adult or something.

Because as a kid, you couldn’t get me to come within 5 feet of a salad like this. 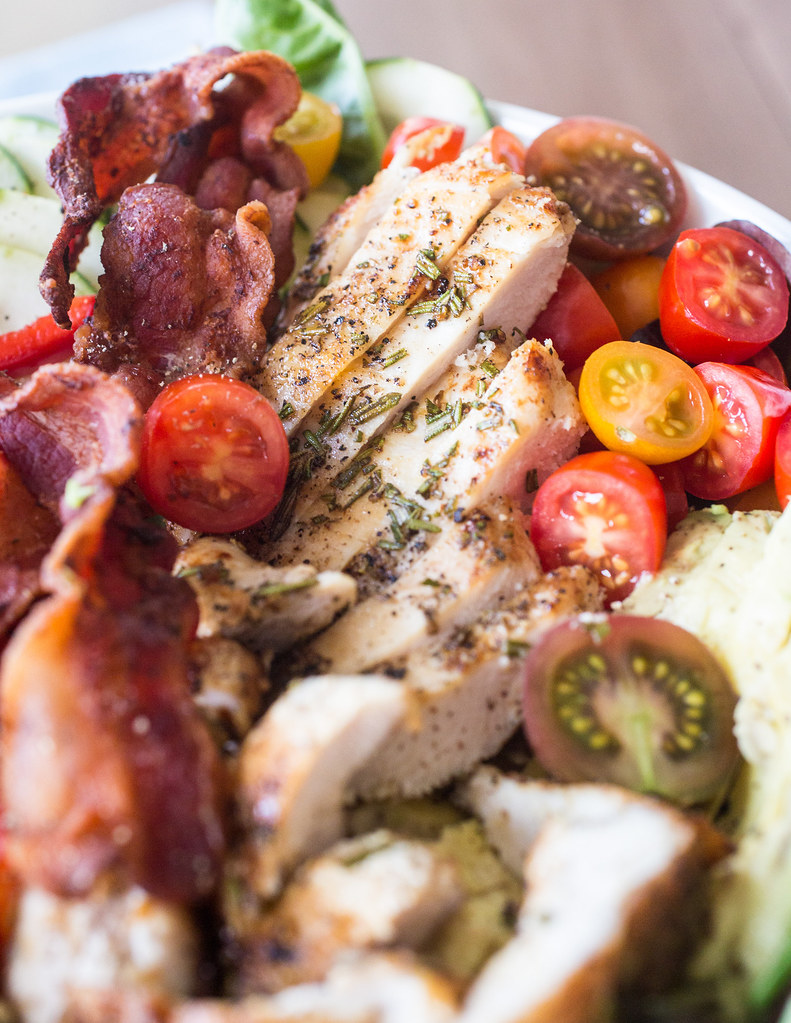 On the hottest of summer nights, when the humidity was so thick it was practically dripping down the screens, making anything but sitting in front of or underneath a fan a fate worse than death, my mom would make chef’s salads for dinner.

These were the nights when it was impossible to cook. Before central AC was a standard in homes.

Hell, before window air conditioners were common in homes in our area. 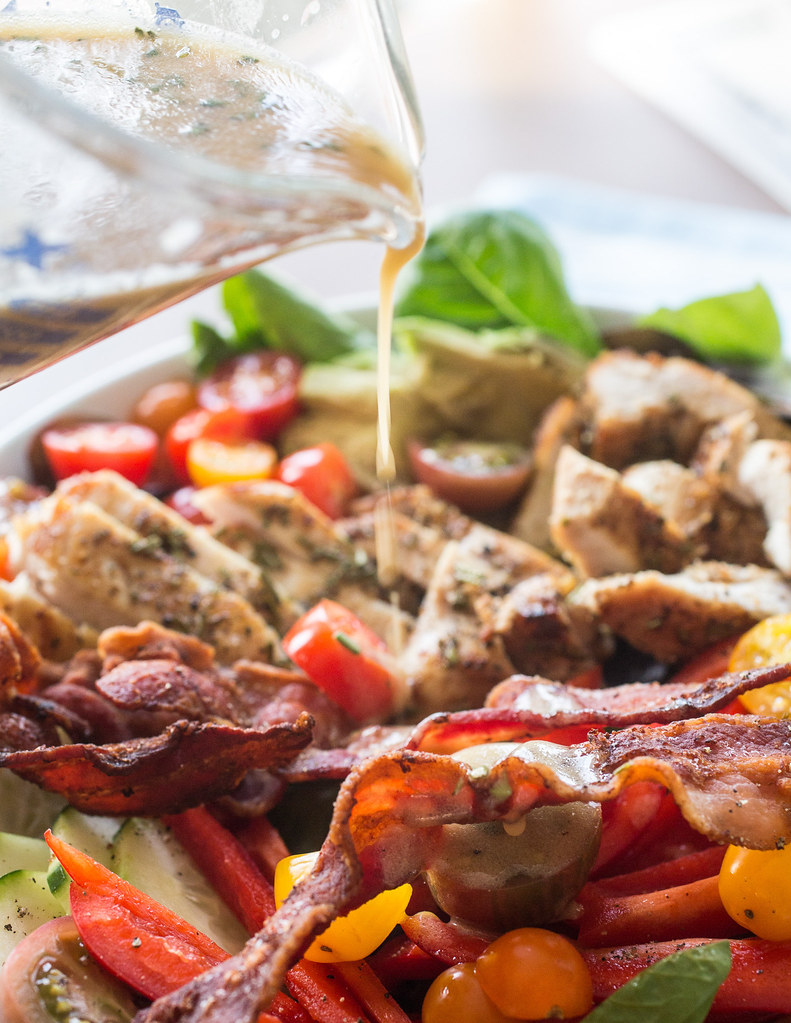 And man, I loathed those chef’s salads.

There was absolutely no joy for me in a bed of lettuce on a plate covered in sticks of deli ham, turkey, and American cheese ends, sliced cucumbers, wedged tomatoes, and hard boiled eggs.

Actually, I really only loathed the deli meat and cucumbers but I digress. This salad was, without a doubt, one of my least favorite meals as a kid. 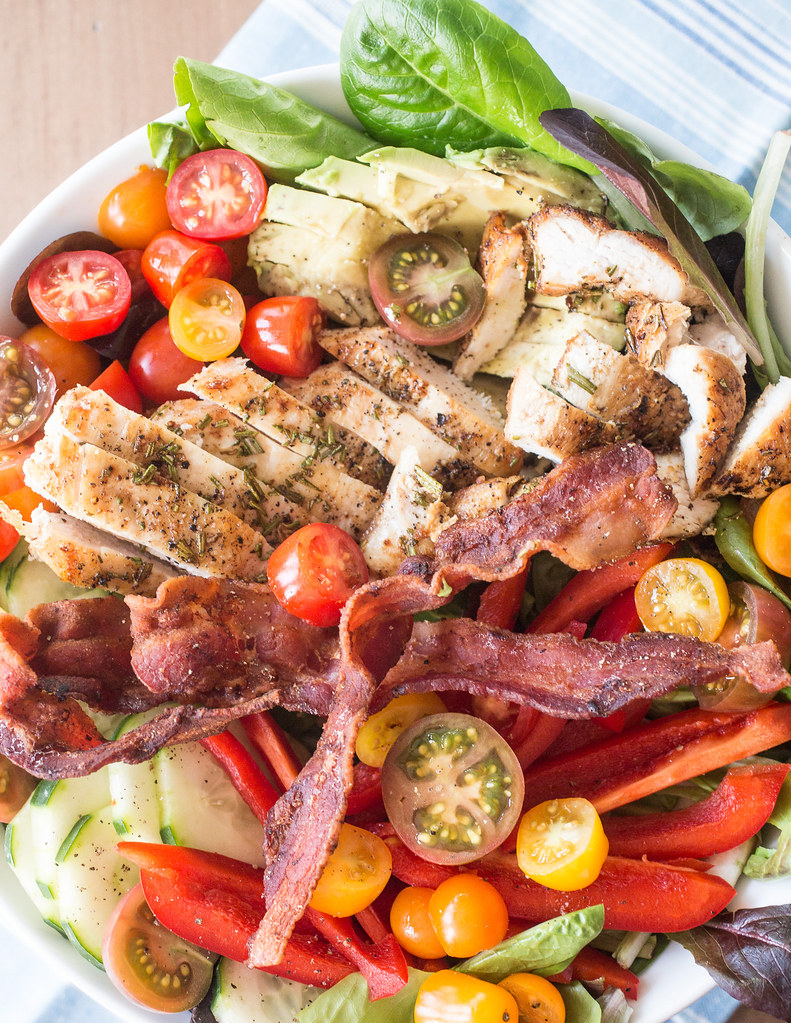 So as an adult, I’m sort of redeeming myself. The dinner salad is now king in my house.

During the cold months, I can’t get enough of this chopped winter roasted veggie and chicken salad and my all-time fave sweet + salty fall harvest salad with its maple mustard vinaigrette.

In the summer, I’m all about cobb salad with genius caesar dressing and grilled sweet corn and zucchini panzanella salad. 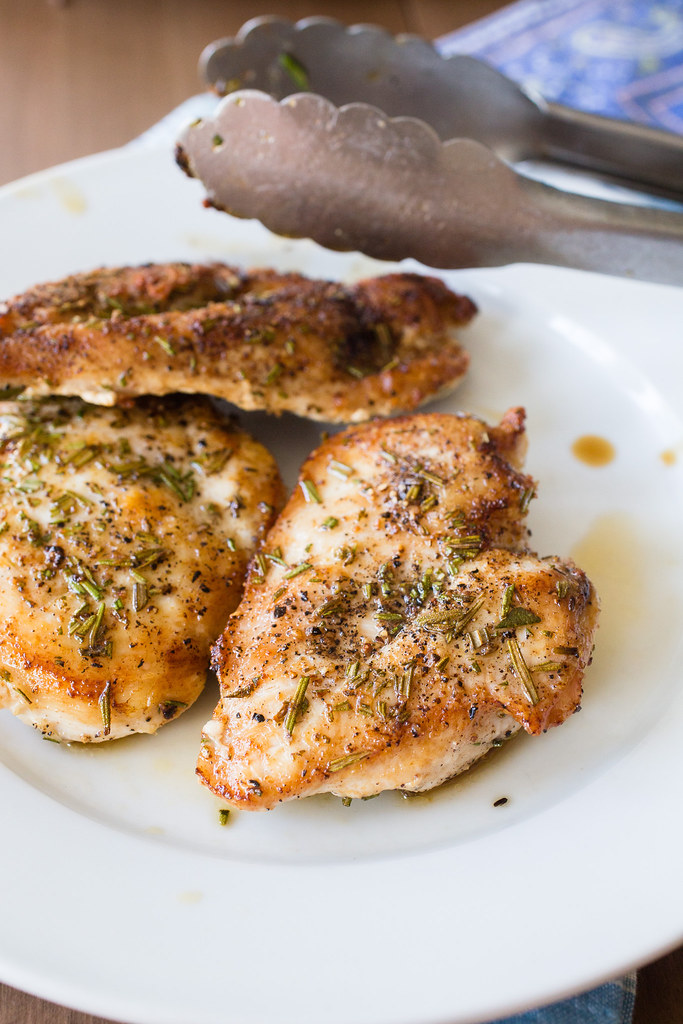 And while this rosemary chicken bacon avocado salad doesn’t technically fall into my “light meals for hot nights” category (which include only meals that require no indoor cooking) since you’ll cook the bacon and then sauté the chicken breasts all covered in fresh rosemary IN the bacon grease. DROOOOOL!!

Even in spite of having to cook the chicken in bacon fat, I’m totally planning to continue making this salad all summer long.

I ALWAYS have way more rosemary growing in my herb garden than I ever need so using a bunch up on the chicken and in the vinaigrette makes me so happy. 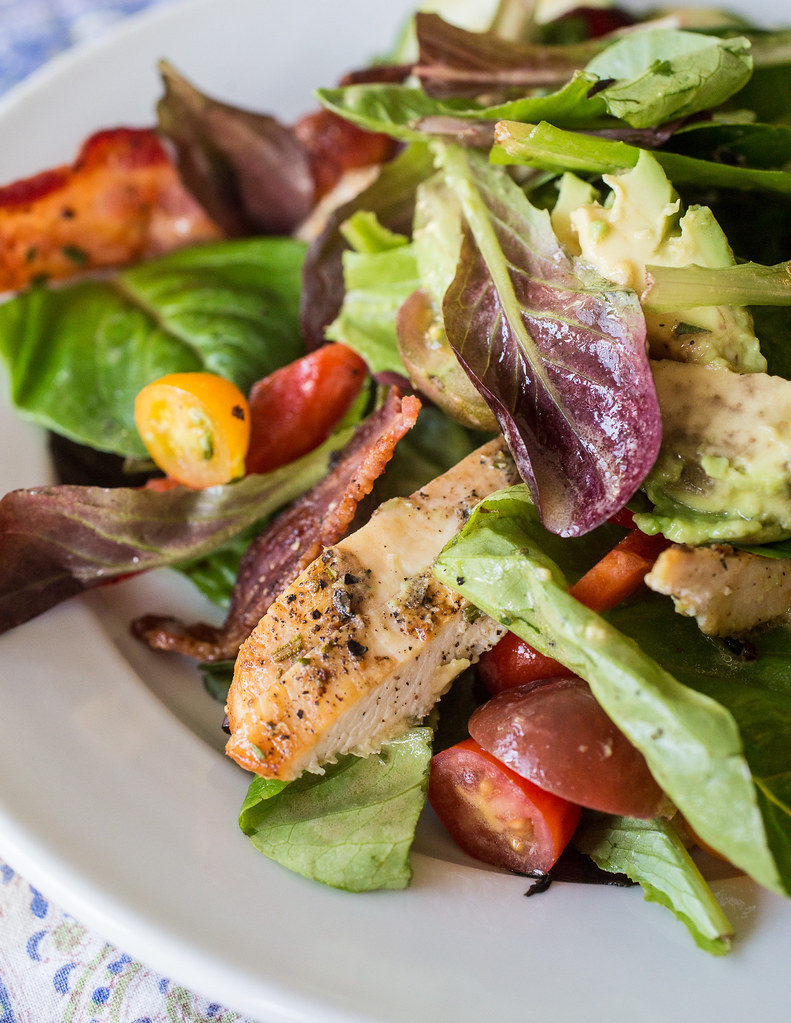 Along with the rosemary chicken, all the chopped stuff in this salad is just so good. Bacon, creamy avocado, fresh and crispy red peppers, sliced cucumbers, sweet cherry tomatoes.

And I can only see this salad getting better as local produce comes into season around here this summer!

The rosemary vinaigrette is excellent – it just pops with fresh, herby  flavor! Although, I have to say, my fresh herb vinaigrette would be phenomenal here too, as would a caesar, ranch, or blue cheese dressing if you’re craving creamy dressing. 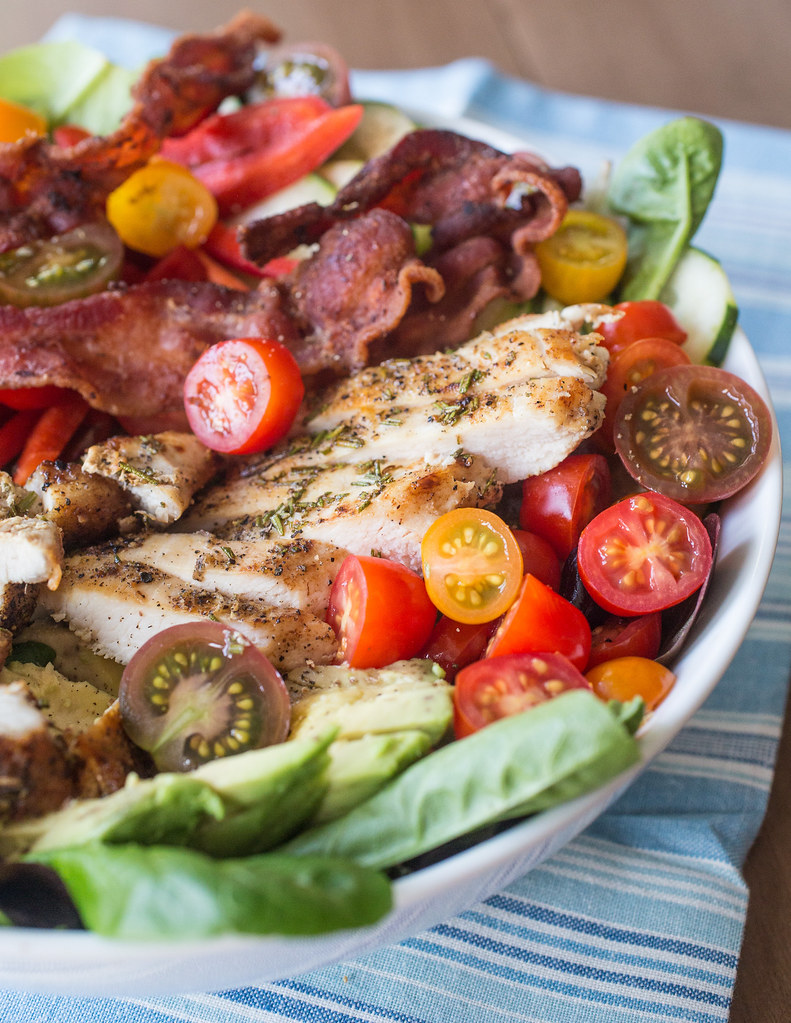 If you’re not already on board, I urge you to get on the dinner salad train. With a big bed of lettuce lying underneath all the toppings, it’s the best way to justify eating bacon for dinner. 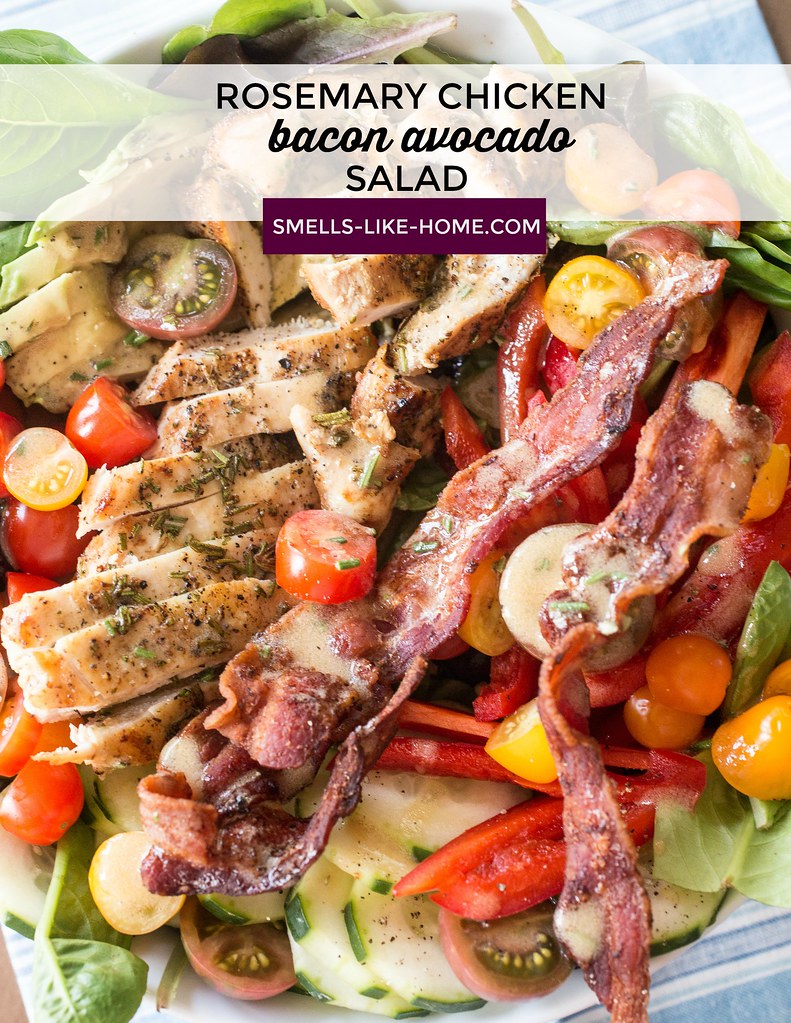 For the Rosemary Vinaigrette:

If your chicken breasts are thick, slice them through the center to create thinner pieces. Thick cutlets will cook unevenly and you'll end up overcooking the narrow/thin ends while waiting for the thicker ends to cook through.

adapted from How Sweet It Is

This recipe was brought to you by Smells Like Home:
https://www.smells-like-home.com/2017/04/rosemary-chicken-bacon-avocado-salad/
< back print Toggle Image
Skip to Recipe