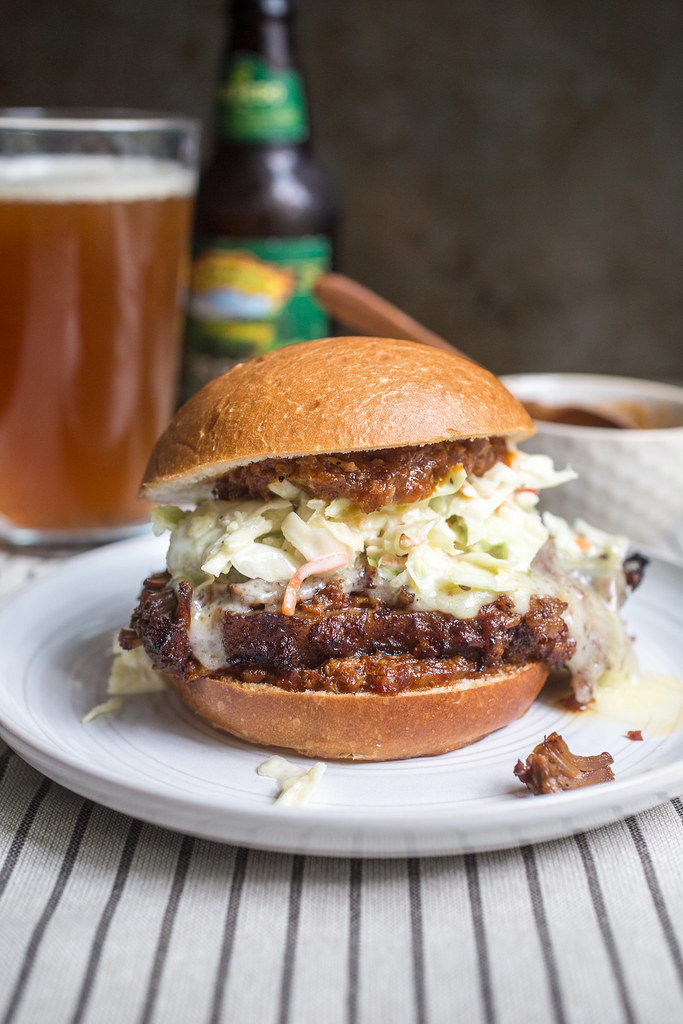 Can we take a minute to talk about cooking for company? Admittedly, with my family living out of town, we’re not used to having company very often. I’ve talked lots about cooking for my parents when they visited and my love for cooking and baking with my mom but I’m not really used to cooking for others.

And since Riley has come home with us, we’ve had an exponential increase in the number of visitors who I, of course, feel compelled to cook for. And let me tell you, with a new baby in the house, this hasn’t been easy! 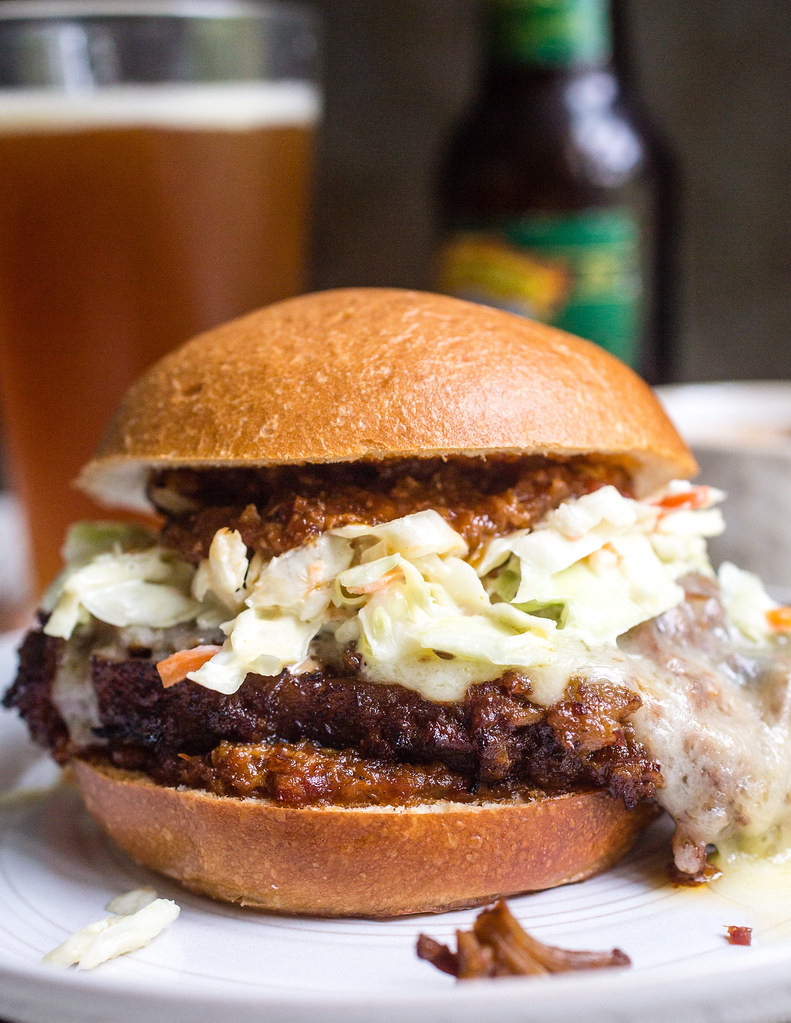 So I’ve turned to easy recipes using the crock pot, our new favorite baked ziti, and an insanely delicious brisket I made last week. The brisket was a splurge but my cowboy uncle from Montana was visiting with my mom and brother for the day and I wanted to make something I knew he’d love (read: beef). 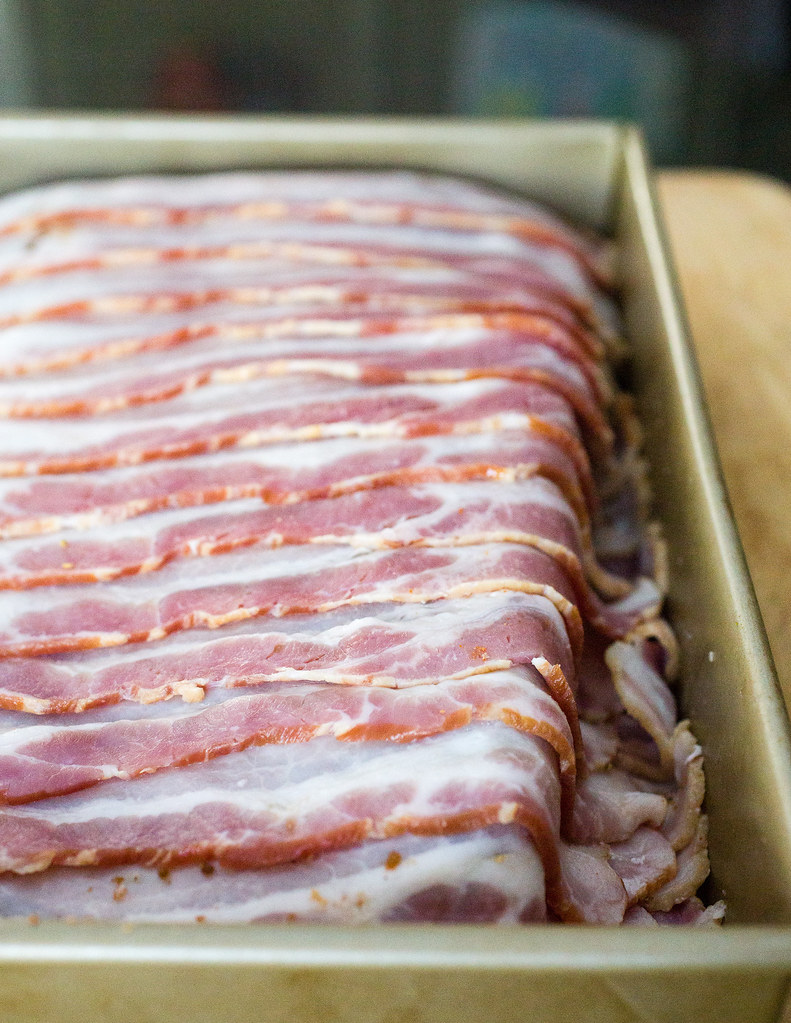 The brisket was also incredibly easy to make! Dry rubbed, wrapped in bacon – yes, WRAPPED. IN. BACON. – and then slow cooked in the oven for 4 hours, I barely had to lift a finger to make it. These days, that’s my kind of recipe! 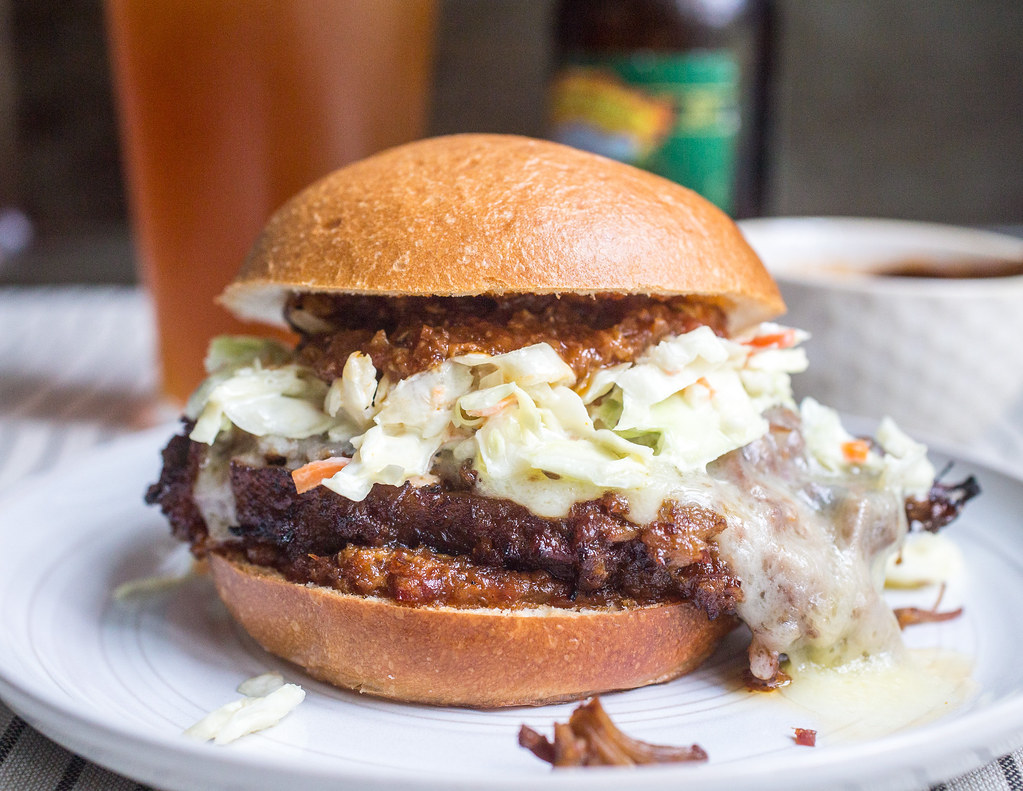 If you’ve never had brisket, I’m here to tell you that it’s unlike any other cut of beef you’ve ever had. After the low and slow cook in the oven, the brisket ends up fall-apart tender and SO full of flavor. It’s literally falling apart as you’re picking it up with your fork.

The last, but certainly not least, thing to mention about this oven barbecued brisket and what truly and completely makes this brisket so incredible is the bacon bbq sauce that goes with it.

Oh no no no! We don’t toss all that bacon after the brisket has finished cooking! 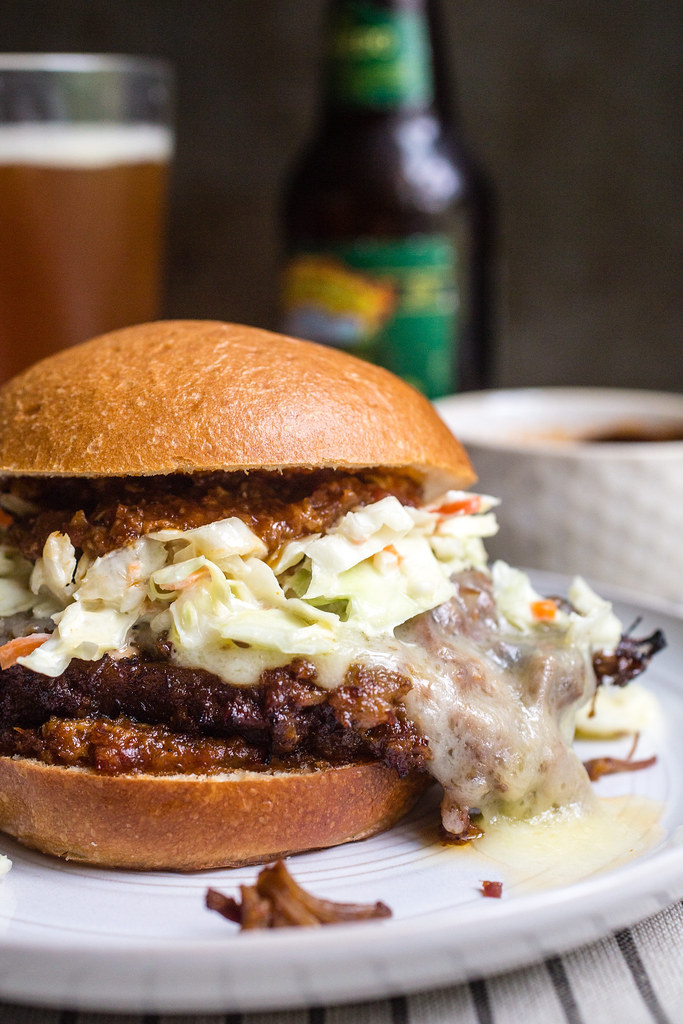 We use it IN the bbq sauce here! Chopped up finely and cooked down with onions and all of the leftover pan juices from the brisket, the bacon adds a ton of smoky flavor to the bbq sauce. It’s an outstanding addition to the already perfect brisket and you’re going to want to just slather it all over everything. 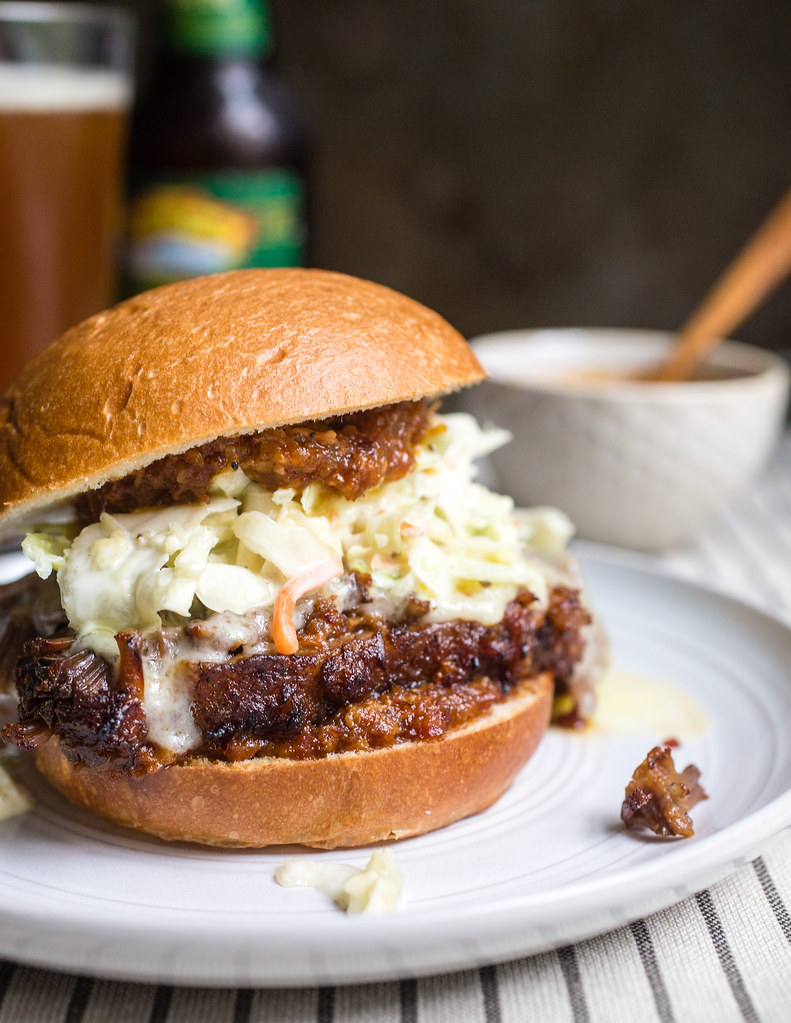 OK, now onto these brisket havarti sandwiches. Can we just take that in for a second? Ah yes…

We ate most of the brisket the night I made it with fresh corn on the cob, coleslaw, and potato salad. The leftovers? They went to these brisket havarti sandwiches.

Ooey, gooey melted havarti cheese all over hot brisket on a brioche bun with slaw and so much of that to-die-for bacon bbq sauce. These brisket havarti sandwiches just blew us away!!

They’re pretty much the very best way to use up the leftover oven barbecued brisket – if you have any! – and because these sandwiches were such a huge hit with us, I’m going to urge you to make a bigger brisket than you think you may need. You’re going to want plenty of brisket for these sandwiches, especially if you eat the brisket with sides first like we did or if you plan to feed a crowd with it. 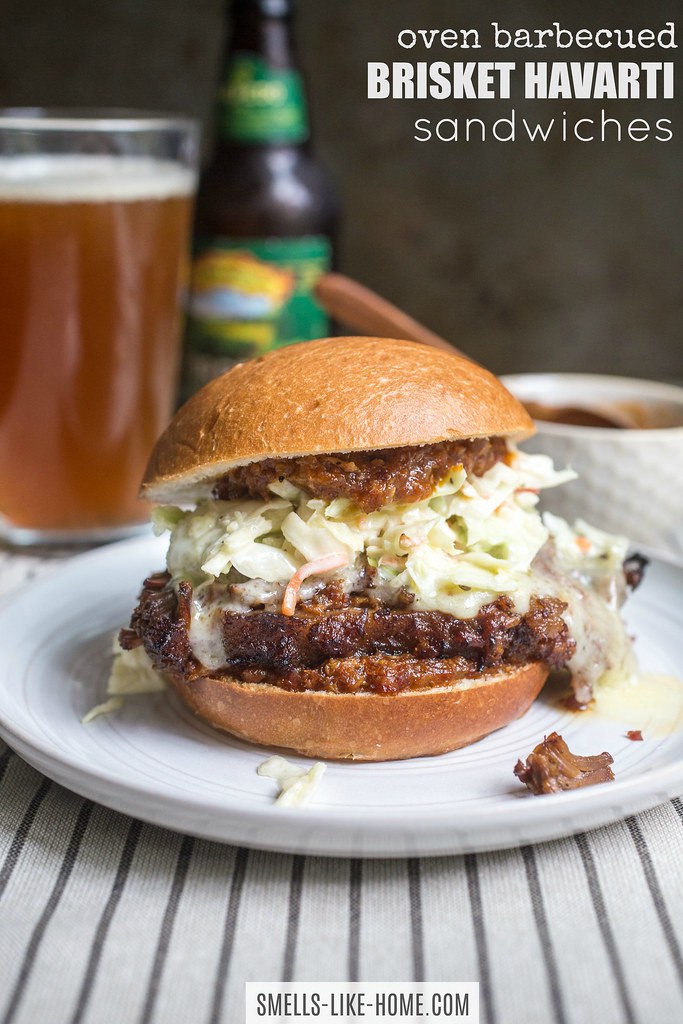 Cooking for company doesn’t have to be difficult or laborious. Just let this oven barbecued brisket be your saving grace in the kitchen!

Needs Sides for These Brisket Sandwiches?

Whether you’re looking for hot or cold side dishes to go with these beefy sandwiches, I’ve got you covered!

Mac and cheese and grilled corn are obvious choices, as is this bacon ranch potato salad and these baked beans.

More “adventurous” side dishes would be some broccoli slaw, this amazing avocado cucumber salad, my very favorite Mexican street corn salad, and these twice baked potatoes with bacon and caramelized onions.

How will you ever choose?!

For the bacon bbq sauce:

I'm giving you a weight range for the bacon on the ingredient list because the weight varies based on which brand of bacon you buy. The original recipe calls for 1 pound of bacon but we buy Applegate bacon which comes in 7-ounce packages. Two packages (14 oz total) was more than enough bacon to cover a 4 ½-pound brisket. You'll need more bacon for a large cut of brisket.

This recipe was brought to you by Smells Like Home:
https://www.smells-like-home.com/2017/10/oven-barbecued-brisket-havarti-sandwiches/
< back print Toggle Image
Skip to Recipe