Skillet Cornbread with Honey Butter: Leave your presumptions about dry cornbread behind. Glistening with honey butter and a sprinkle of flaky sea salt, this recipe is soft, moist, and utterly delicious. 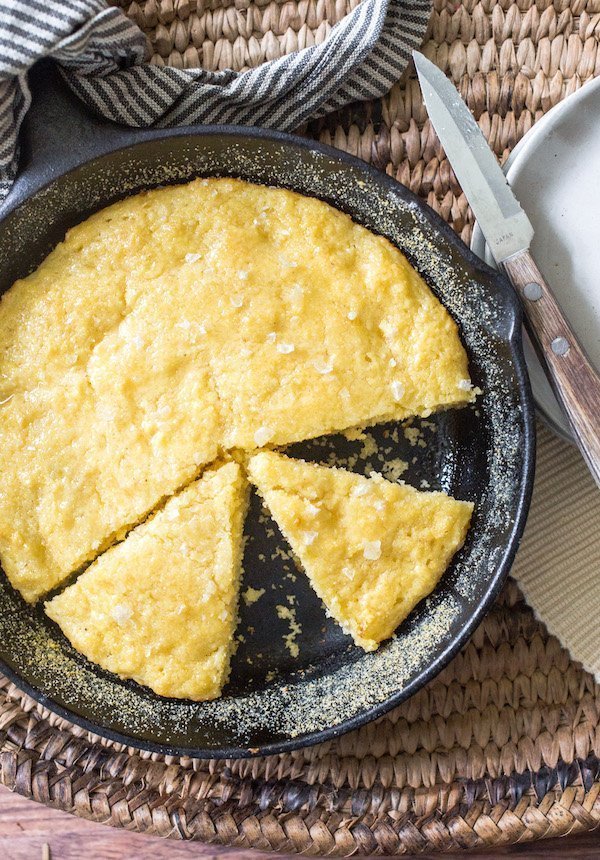 Why is it that cornbread is one of those foods that just seems to get forgotten about? I mean, people go completely nutso about biscuits.

And for good reason, right? They’re buttery, flaky handheld nuggets of incredible flavor. They’re perfect on their own, nestled under sausage gravy, and made into sandwiches.

But cornbread? Cornbread really deserves a slow clap of its own in the best way possible. It’s kind of like the dark horse of carby sides.

It’s easy to make, comes out of the oven hot and steamy, and yet, it’s completely unassuming. With a plain yellowish top that’s lacking in pizazz, you’d never know the deliciousness that lies beneath.

But if you’ve had good cornbread (all the Ina Garten happening in my head right now), you know what I’m talking about. And if all you know of cornbread is dry, crumbly squares of baked cornmeal, listen up.

Good cornbread is like a gift from above. This skillet cornbread with honey butter is just that. It’s soft, moist – yes, I went there – and packed with flavor.

Skillet Cornbread in the Oven

Since I started making cornbread 20 years ago, I’ve been baking it in a glass baking dish. I attempted to make cornbread in a cast iron skillet before back when I made our favorite beef chili for the first time but honestly, I hated the way it turned out.

It was ridiculously dry and crumbly: the exact reasons why people tend to shun cornbread in the first place. I simply assumed that the intense heat retention of the cast iron skillet over baked the cornbread and made it dry.

And while I vowed to redeem myself, I secretly also felt like that’s how skillet cornbread in the oven was meant to turn out.

Boy, was I wrong!

The buttermilk in this skillet cornbread recipe is actually what helps to keep the cornbread soft and moist without an overpowering tanginess that buttermilk sometimes imparts in baked recipes.

So rather than blaming the skillet for my awful cornbread that first time, I embraced it and used ingredients that would combat the dry and crumbly issues.

How to Make Skillet Cornbread

Like any other cornbread recipe, this one is dead simple. It’s a mix of dry ingredients: coarse cornmeal, flour, sugar, baking powder, baking soda, and salt, and wet ingredients: buttermilk, melted butter, and eggs.

Once you mix all of the ingredients into a thick batter, you’ll spread the batter out in a well-buttered and cornmeal-dusted cast iron skillet and pop the skillet into a 375° F oven for about 25 minutes.

Let’s Talk about the Honey Butter

OK, so what completely sets this skillet cornbread apart from the rest of the thousands of recipes out there is the honey butter that I brushed on top before serving. It adds another level of sweetness to the cornbread but let me be clear: the honey butter doesn’t saturate this cornbread with sweetness.

Instead, it adds just enough to let you know it’s there without making the cornbread cloyingly sweet. Are you with me?

Along with the honey butter, I sprinkled a little flaky Maldon sea salt on top of the honey butter to add the tinsiest bit of crunch and a contrasting flavor profile that just explodes on the taste buds. In my book, sweet and salty is the BEST flavor combination and the salt and honey butter hit alllll the marks atop this cornbread.

What I Love About this Skillet Cornbread with Honey Butter

Right off the bat, let me just reiterate how easy this cornbread is to make. Forget opening a box of cornbread mix. The ingredients here are as basic as basic gets and odds are, you have all of them in your kitchen right now to make it.

If you don’t have buttermilk, mix the milk with a tablespoon of lemon juice or distilled vinegar and let it sit for 5 minutes. Stir it up and you have a quick buttermilk to use. No excuses here, people! 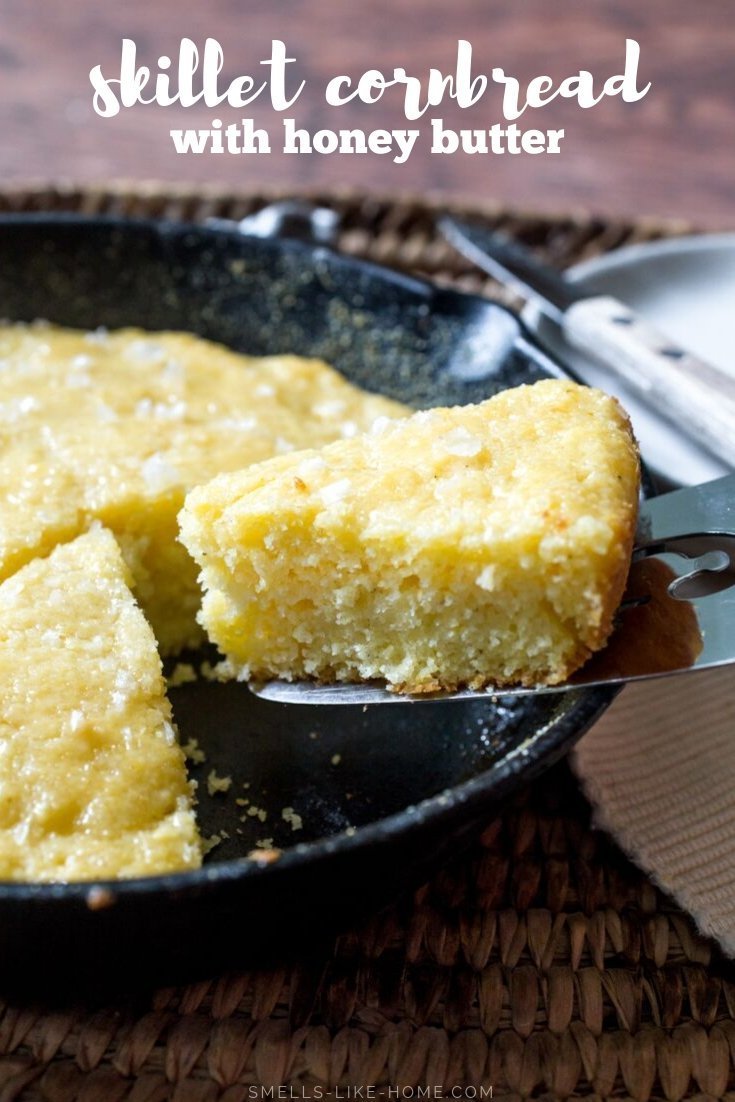 Baked in a cast iron skillet, the cornbread emerges from the oven with an impossibly soft center and slightly crunchy edges. So if you’re a brownie edge lover like I am, you’ll love the crunch of this cornbread as much as I did.

The honey butter and sprinkle of salt not only make this skillet cornbread glisten, they also make it sing! The sweet and salty combination of flavor atop this savory and slightly sweet cornbread is the absolute best and I guarantee that you won’t find a better cornbread recipe anywhere on the web.

That’s saying a lot. I know. But like with all of my other recipes, I fully stand behind this one. And I wouldn’t lead you astray.

What Goes with Cornbread?

In my opinion, cornbread is excellent for dipping into chili and soup so some of my favorite meals to serve cornbread with are:

But there’s also no reason to relegate cornbread to being dipped into something. This skillet cornbread would also be absolutely perfect alongside some grilled steak, Ina’s turkey meatloaf, this chicken with country gravy, this butterflied and grilled chicken, or even bacon and onion jam burgers!

For the honey butter and topping:

This recipe was brought to you by Smells Like Home:
https://www.smells-like-home.com/2019/09/skillet-cornbread-with-honey-butter/
< back print Toggle Image
Skip to Recipe