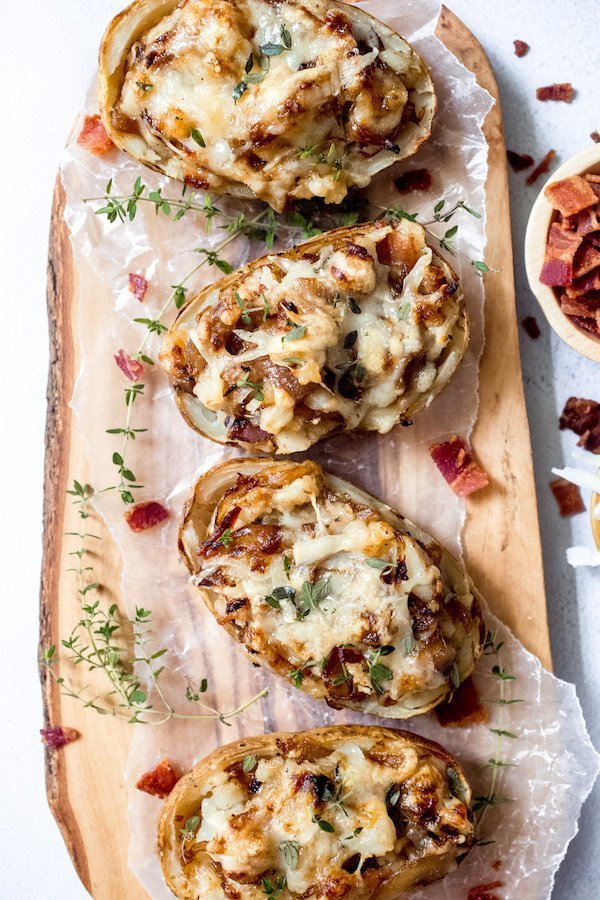 Twice Baked Potatoes with Bacon and Caramelized Onions: The perfect side dish recipe for any protein, these twice baked potatoes are loaded with bacon, caramelized onions, cheese, and fresh thyme. They’re surprisingly easy to make and will make everyone at the table happy at dinner time!

Many many years ago, I was first introduced to the twice baked potato. It’s difficult to pin point the exact time this was but I believe it was during a big family dinner.

It wasn’t during a holiday dinner or anything like that, but probably on a winter weekend or maybe for one of my dad’s birthdays.

I definitely remember my mom making a roast pork loin as the protein for the meal which makes it more likely this was for one of my dad’s birthdays. The man loved his pork!

And I also definitely remember absolutely flipping out over my first twice baked potato. I’ve always loved the skins from the baked potatoes so with the combination of loaded mashed potatoes stuffed into the skins, I was in heaven! 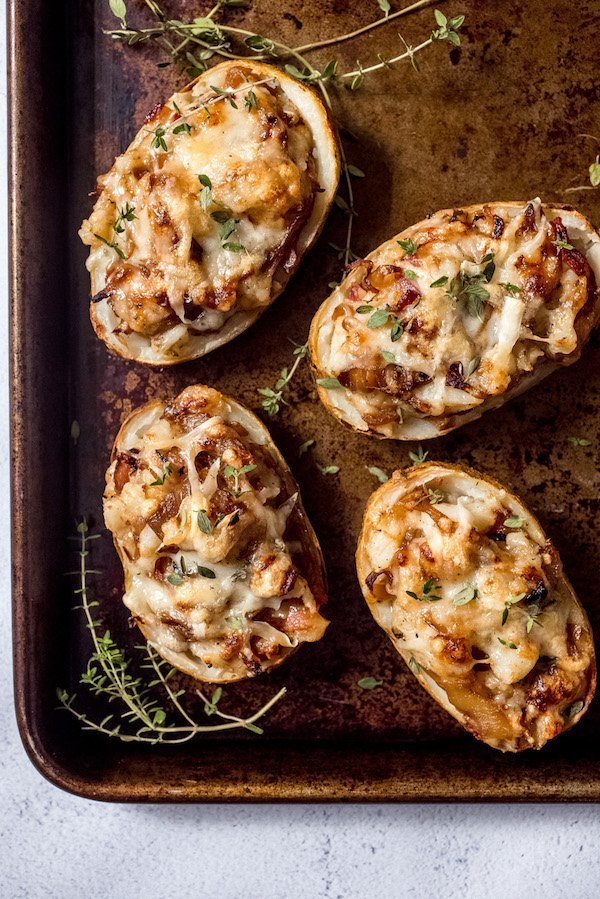 That’s probably because while I tend to make easy twice baked potatoes, they aren’t always quick to make. They tend to be geared more for weekend meals rather than weeknight meals, right? 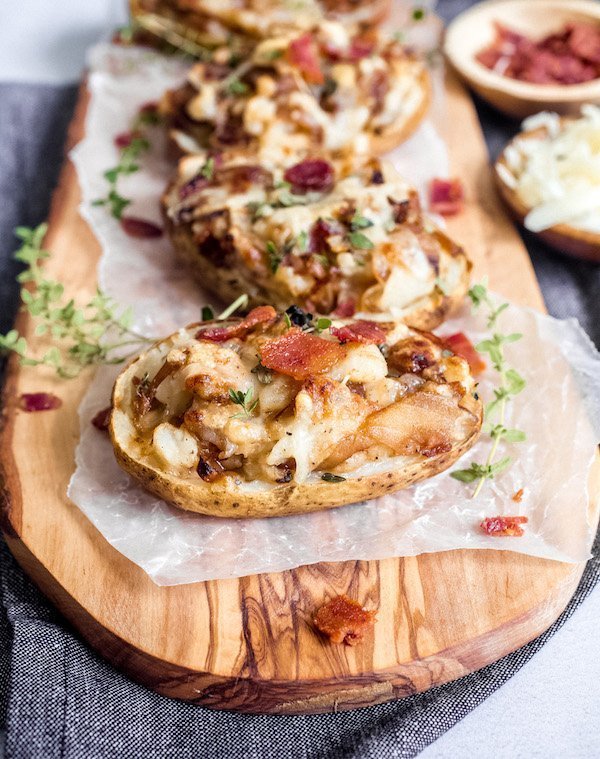 So for these twice baked potatoes, I really wanted to create an incredible potato that would be delicious as a side dish to a hearty protein. And I wanted one that could stand alone as a great lunch with maybe a small salad or bowl of soup on the side as well.

What is a Twice Baked Potato?

A twice baked potato is a potato that has been baked twice. The first bake is to cook the potato. And the second bake is after you’ve scooped out the potato from the skin, mixed it with delicious add-ins (usually cheese, among other things), and stuffed the filling back into the potato skin.

If you’ve never had a twice baked potato, please get to it soon! If you love mashed potatoes, THIS is the kind of recipe you’ll love! 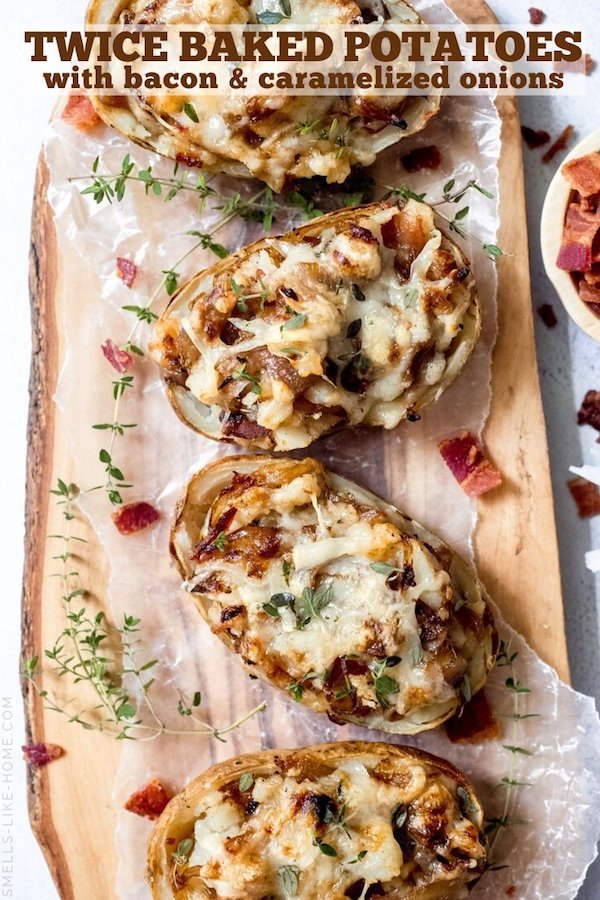 I realize that not everyone has a go-to baked potato recipe and up until a couple of years ago, neither did I. But since the whole basis behind a twice baked potato is well, the baked potato, it needs to be a good baked potato.

The potato skin needs to be crispy and sturdy because it acts as a wall to hold your potato stuffing in when the potatoes are baked a second time.

To make great baked potatoes, you’ll quickly rinse Idaho or Russet potatoes in a salt water brine before baking them on a rack over a baking sheet. 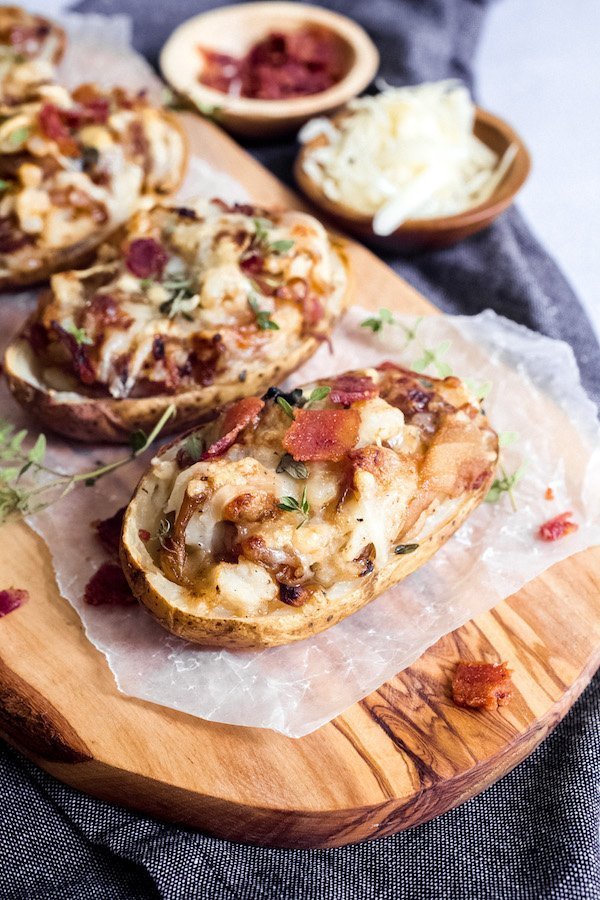 The rack allow for air flow underneath the potatoes, which helps to bake them evenly all the way around. 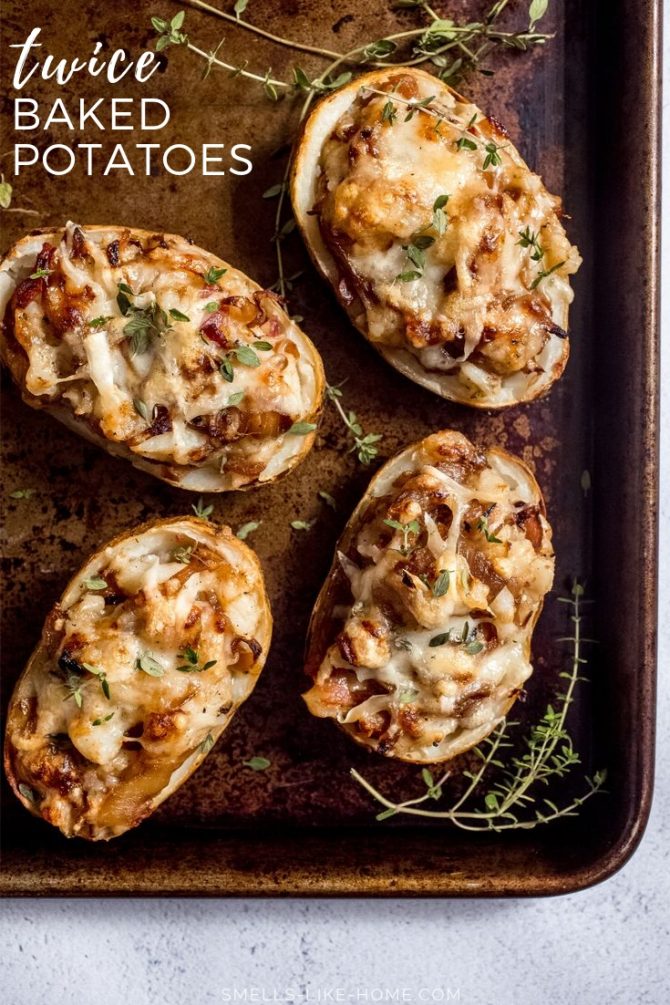 How to Make Twice Baked Potatoes

To make these twice baked potatoes with bacon and caramelized onions, you’ll pull your baked potatoes from the oven, slice them in half horizontally, and then scoop out the potato from the skin.

You’ll want to leave a little of the potato holding to the skin so the potatoes skins won’t tear when you stuff them.

Next, you’ll stuff them with your filling mixture!

In developing this twice baked potatoes recipe, I knew I wanted caramelized onions to be one of the primary filling ingredients. I absolutely adore the OOMPH that caramelized onions add to a recipe (see this risotto, for example) and their deeply caramelized and sweet, earthy flavor was exactly what these potatoes needed. 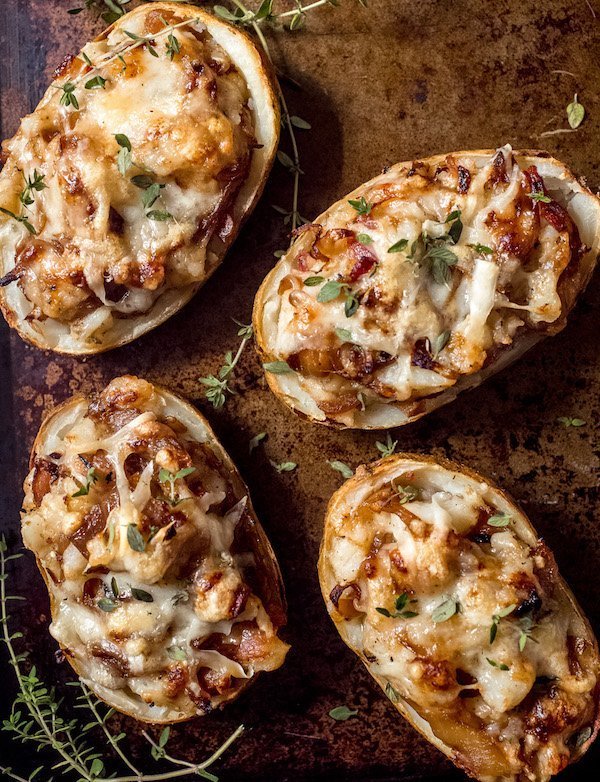 So I made a batch of of my favorite caramelized onions while I had the baked potatoes in the oven. If you’re a weekend meal prepper, you could definitely make the onions on the weekend and keep them in the fridge for 1 week before using them.

I mixed my potatoes with those caramelized onions, chopped bacon, gruyere cheese, and fresh thyme. 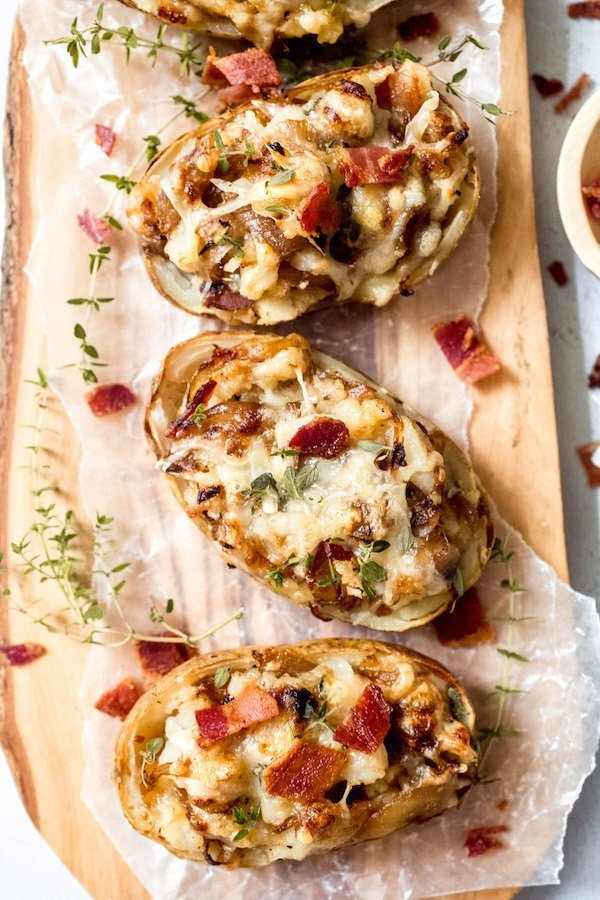 Once you’ve filled the potatoes back up, you’ll add some more cheese to the tops, and pop them in the oven for their second bake. They’ll need just a few minutes for the filling flavors to meld and for the cheese to melt.

What emerges from the oven is quite possibly one of best potato side dishes I’ve ever eaten! And that’s saying a lot when you have these cheesy hasselback potatoes in your repertoire!

The potato filling is quite literally bursting at the seams with flavor and the hint of thyme balances all of those savory flavors so nicely. 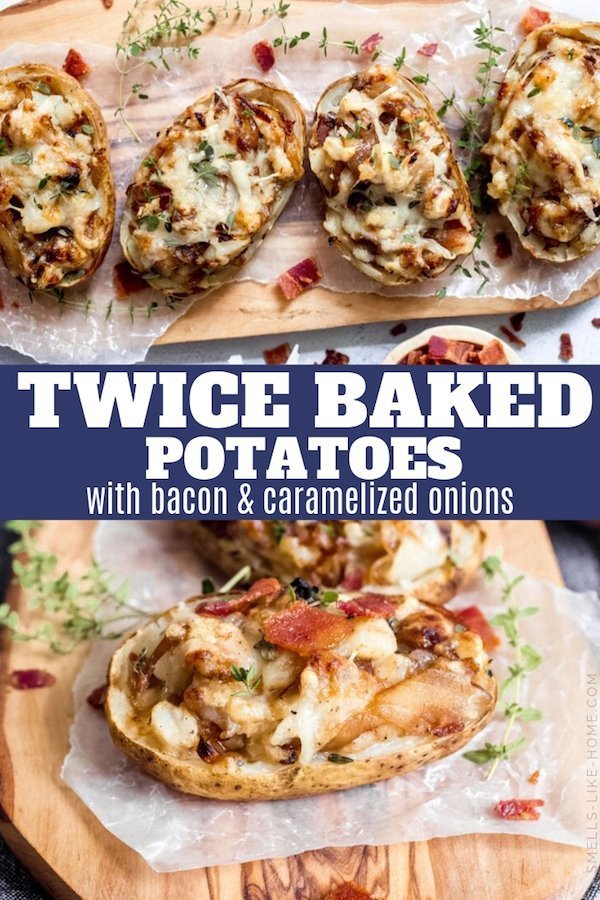 The all-important potato skins remain crispy during the second bake and even the potato skin haters in your family may actually eat them! I know mine did!

What to Serve Twice Baked Potatoes with

Obviously, these potatoes would be excellent alongside some grilled steak. But they would also be outstanding with Ina’s turkey meatloaf, this chicken with country gravy, this butterflied and grilled chicken, or even bacon and onion jam burgers!

For the caramelized onions:

Feel free to bake your potatoes using your preferred method. However, if you're tired of your plain ol' baked potatoes and want crispy skins and fluffy insides every single time you make them, or you need to know how to make baked potatoes, you must try my tried and true oven baked potato recipe.

Do Ahead: The caramelized onions can be made and stored in the fridge for up to 1 week before you need them for this recipe.

This recipe was brought to you by Smells Like Home:
https://www.smells-like-home.com/2019/10/twice-baked-potatoes-recipe-bacon-caramelized-onions/
< back print Toggle Image